Transat Inc. could face fallout from the collapse of Thomas Cook Group PLC after a partnership between the companies died on Monday.

The tour operator, which runs Air Transat, was in the second year of a seven-year deal to exchange aircraft with the British company’s airline on a seasonal basis.

The Montreal-based Transat was slated to receive at least seven jetliners from Thomas Cook this fall, but “the partnership is dead because the company no longer exists,” spokesman Christophe Hennebelle said.

He said Transat, which is working to complete its takeover by Air Canada next year, is “confident” the Airbus A321 planes will still come through, but is making contingency plans.

“We’re not waiting until the last minute. We’re working to receive the planes, and at the same time we’re thinking of other plans to make sure that the schedule will be respected,” Mr. Hennebelle told The Canadian Press.

Hundreds of thousands of travellers were stranded across the world on Monday after Thomas Cook collapsed, halting almost all its flights and hotel services and laying off all its employees as the company ceased trading.

The liquidation of the 178-year-old travel company, which helped create the package-tour industry, will have sweeping effects across the European and North African tourism industry and elsewhere, as hotels worried about being paid and confirmed bookings for high-season winter resorts were suddenly in doubt.

Nasim Lalji, who lives in Brampton, Ont., was scheduled to take a Thomas Cook flight from London to Turkey next week with her husband until the flight was cancelled on Monday.

The couple, who paid about $307 each for the trip, said they were promised a full reimbursement and were in the process of rebooking with another airline on Monday.

“But that is going to cost us way more than what our initial price was,” Ms. Lalji said in a phone interview.

Flights from London to Turkey’s Dalaman Airport costing less than $500 early on Monday morning rose to nearly $600 a few hours later, she said.

“Every minute you delay booking your flight, the prices go up … because everybody is now trying to find other options,” Ms. Lalji said. “It is a major inconvenience.”

“To date, we have no reports of any Canadian citizens being affected by the collapse of the British tour operator Thomas Cook,” the department said in an e-mail.

Overall, about 600,000 people were travelling with the company as of Sunday, though it was unclear how many of them would be left stranded, as some travel subsidiaries were in talks with local authorities to continue operating.

The company, whose airlines, resort and hotels served 19 million people a year in 16 countries, had a limited presence in Canada.

Condor Flugdienst, Thomas Cook’s main German carrier, is the only one that flies to Canada, with seasonal flights from Frankfurt to Toronto, Vancouver, Calgary, Halifax and Whitehorse. While all flights took off as planned Monday, Condor has requested financial aid from the German government in a bid to keep the subsidiary afloat, it said in a release.

“We’d only see a benefit really 1/8 to Air Canada3/8 if Condor stops flying. Their capacity to Canada is not that large.” he said.

“Most of what Thomas Cook was doing was vacation business out of Europe – out of the U.K., out of Scandinavia, out of Germany – primarily to sun destinations. And that’s the business that’s been hit hard. It’s not like your average Canadian travel agent had a bunch of brochures on their racks to buy it.”

The company, which began in 1841 with a one-day train excursion in England, has been struggling for years due to competition from budget airlines and the ease of booking low-cost accommodations through the internet, particularly in Europe.

“Whether it’s easyJet or Ryanair or Wizz Air or Norwegian, you can go get an el cheapo flight...and then go get your own hotel and design your own tour,” Kokonis said.

The British government said it was taking charge of getting the firm’s 150,000 U.K.-based customers back home from vacation spots across the globe, the largest repatriation effort in the country’s peacetime history. The process began Monday and officials warned of delays.

A stream of reports Monday morning gave some sense of the extent of the travel chaos: some 50,000 Thomas Cook travellers were stranded in Greece; up to 30,000 stuck in Spain’s Canary Islands; 21,000 in Turkey and 15,000 in Cyprus alone.

An estimated one million future Thomas Cook travellers also found their bookings for upcoming holidays cancelled. Many are likely to receive refunds under travel insurance plans. 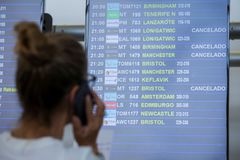