A TransCanada Corp. vice-president who headed Coastal GasLink for nearly seven years has warned that the $6.2-billion pipeline project will be at risk of being cancelled unless workers are allowed unfettered access across an Indigenous protest camp.

“Inability to construct any portion of the project means the whole project will cease,” Rick Gateman said in an affidavit in B.C. Supreme Court. Coastal GasLink, owned by Calgary-based TransCanada, is seeking a permanent injunction to prevent protesters from reviving a blockade on the Morice River bridge in the B.C. Interior.

Mr. Gateman, who is now a TransCanada vice-president of business development, served as Coastal GasLink president from 2012 until last week. “Unimpeded access is important to ensure the safety of crews working in these remote areas,” he said in his affidavit dated Nov. 23, 2018.

His 16-page affidavit is part of a series of court documents filed by Coastal GasLink in a bid to prevent protesters from re-establishing the blockade, which had been originally erected in 2010 to disrupt Enbridge Inc.'s now-defunct Northern Gateway oil pipeline proposal.

David Pfeiffer took over as Coastal GasLink president on Feb. 1. He formerly worked as TransCanada’s vice-president overseeing projects in Mexico. “There continues to be strong support for this $6.2-billion critical energy infrastructure project, including from Indigenous communities,” Mr. Pfeiffer said in a statement on Tuesday.

Coastal GasLink received provincial regulatory approval in 2014 to proceed with plans to construct a 670-kilometre pipeline to transport natural gas from northeastern B.C. to a West Coast terminal. The $18-billion plant in Kitimat, for exporting liquefied natural gas to Asian markets, will be built by LNG Canada, the consortium led by Royal Dutch Shell PLC.

The Unist’ot’en blockade on the bridge came down on Jan. 11, allowing Coastal GasLink workers to gain access to a portion of the pipeline route located 1.1 kilometres away. Unist’ot’en is affiliated with Dark House, one of 13 hereditary house groups belonging to the Wet’suwet’en Nation.

The RCMP and Wet’suwet’en hereditary chiefs agreed to a deal to comply with an interim court injunction.

“If the project does not proceed, then LNG Canada’s facility will have no source of gas, and likely it would not proceed either,” Mr. Gateman warned.

He said the economic stakes are enormous, pointing to $527-million already spent on preliminary development costs. He also estimates that the pipeline would contribute more than $20-million annually in property taxes to four regional districts in British Columbia, as well as generating $170-million in tax revenue for the B.C. government during the construction phase.

Michael Lee Ross – a lawyer representing two defendants named in the court case, Freda Huson and Warner Naziel – countered in December that, in 2011, Dark House formally opposed all pipelines proposed through the unceded territory of the Wet’suwet’en Nation.

Ms. Huson, a spokeswoman for the Unist’ot’en, said in a 2015 e-mail to a Coastal GasLink official that when pipeline representatives visited her, she told them that their sales pitches were unwelcome. In an e-mail appearing in court, she wrote: "I asked the question, ‘When a vacuum salesman shows up to your door and you say you don’t want the vacuum, do you invite him in to discuss the vacuum – Do you know what no means?' ”

Ms. Huson reiterated her opposition in an e-mail in August, 2018. “We don’t want these projects coming,” she told Claire Marshall, a consultant retained by Coastal GasLink. “You have not gained consent to enter our territory.”

But Mr. Gateman said all 20 elected First Nation councils along the pipeline route have signed project agreements, including five councils within the Wet’suwet’en Nation’s traditional territory. The pro-pipeline stance of elected councils puts them at odds with five prominent Wet’suwet’en hereditary chiefs who have led a campaign to oppose Coastal GasLink.

Coastal GasLink has conditionally awarded $620-million in contracts to Indigenous businesses in British Columbia. “These contracting and employment opportunities will not be available if the project does not proceed,” he warned.

Coastal GasLink said its staff crossing the bridge will not affect a healing lodge, which is part of the Unist’ot’en camp. The company hopes to have the pipeline in service in 2023, while LNG Canada wants to begin fuel exports to Asia in late 2024 or early 2025.

In an interview, LNG Canada chief executive officer Andy Calitz said the Kitimat terminal’s construction schedule remains on track. “Projects are too big to start and stop,” Mr. Calitz said. “We are clear that our project will be completed, and the events of the past weeks around the Morice River bridge have not changed that." 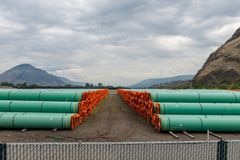 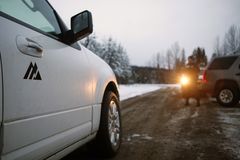