The Boeing 737 Max will return to Canadian skies on Thursday when Transport Canada lifts a 22-month order that grounded the aircraft after two fatal crashes within five months killed 346 people in Indonesia and Ethiopia.

Air Canada will launch commercial flights of the Boeing 737 Max on Feb. 1 and WestJet Airlines Ltd. will resume flying passengers on 737 Max planes on Thursday, marking the end of a heavily scrutinized revamp of the plane’s control system and scathing reports about Boeing’s manufacturing and development processes that cost it billions in lost sales and damaged the company’s reputation.

The world’s major aviation authorities grounded the 737 Max in March, 2019, after it became clear both crashes – Lion Air in October, 2018, and Ethiopian Airlines in March, 2019 – were linked to the plane’s automated control system. Both planes crashed shortly after takeoff and exhibited similar flight patterns – repeated nosedives and recoveries.

Transport Canada and other regulators took part in the development and review of the safety changes Boeing made to the model. The regulator departed from the traditional practice of accepting the U.S. safety certification of the model, and conducted its own review of engineering changes and training requirements, which include updated software for the control system.

Canada is also requiring that its pilots have the option of following different operating procedures that allow them to disable the so-called stick shaker alarm system that triggers if the control system is fed erroneous information by sensors. The stick shaker warning contributes to the distracting and intrusive cockpit environment when pilots are seeking to diagnose and control flight emergencies.

Canada has required the addition of coloured caps on the circuit breakers for the stick shaker alarm, to make it easy for the crew to disconnect the warning.

“This feature will effectively reduce pilot workload given what has been learned from the two tragic accidents, and has been fully evaluated by Transport Canada’s flight test pilots,” Transport Canada said in a statement.

The plane was cleared to return to service in the United States in November.

Launched in 2016, the best-selling Max is an updated version of the 737 model that has been the mainstay of the skies since the late 1960s. But reviews of the U.S.-made Max revealed the safety approval process was clouded by a cozy relationship between Boeing and the U.S. Federal Aviation Administration. Canada and other global regulators essentially rubber-stamped the U.S. approval of the new version, as was the practice at the time.

Boeing recently agreed to pay US$2.5-billion to settle a U.S. Justice Department investigation into allegations the company defrauded the regulator in seeking approval for the plane.

An investigation by the U.S. House Committee on Transportation and Infrastructure found Boeing hid from regulators the existence of a safety system that automatically counters upward pitches by the plane.

Chris Moore, a Toronto man whose 24-year-old daughter Danielle was among the 157 killed aboard the Ethiopian Airlines 737 Max, said the plane is an “ill-conceived” and “butchered” version of the older 737 models. “Although I’m skeptical that the B737 Max may meet regulations, the plane does not meet modern safety standards,” Mr. Moore said in a statement to The Globe and Mail. “It is a step backward for consumer product safety and innovation.”

Before the Max was grounded, Canadian airlines were among the biggest users of the model. The narrow-body planes have better fuel efficiency, lower operating costs and greater range than older planes. The Max holds as many as 204 people, depending on the seat configuration, and can reach Europe from Halifax.

WestJet’s first passenger flight of the Max will be on Thursday, the 7:50 a.m. MT trip to Vancouver from Calgary. Another Max will fly to Toronto from Calgary that day, and then three times every week.

“We are very confident the nearly two-year regulatory process undertaken by Transport Canada and other regulators worldwide ensures the utmost safety of the Boeing 737 Max fleet from nose to tail, and from wing to wing,” Murray Strom, Air Canada’s vice-president of flight operations, said in a statement.

“As part of Air Canada’s multilayered approach to reinforcing and enhancing safety, our internal experts have also worked with independent specialists to conduct assessments of the aircraft and our operating procedures.” 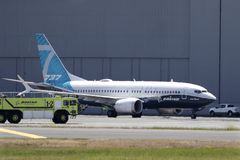 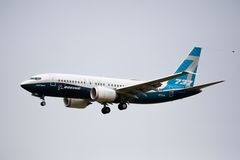 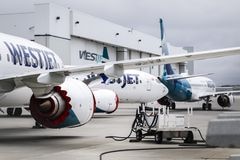