Mr. Trudeau affirmed that Chapter 19 is a “red line” for Canada.

“We need to keep the Chapter 19 dispute resolution because that ensures that the rules are actually followed. I mean, we have a President who doesn’t always follow the rules as they’re laid out,” he said in an interview with an Edmonton radio station on Wednesday.

Mr. Trump, for his part, zeroed in on Canada’s protected dairy market, accusing the country of “taking advantage” of the United States, but predicting he would know “over the next two or three days” whether a NAFTA deal with Canada is possible.

Opinion: Trump’s actions on NAFTA, tariffs show that a deal is not a deal. Not any more

Meanwhile, Mexico’s chief NAFTA negotiator said he expects the United States and Canada to finish NAFTA talks by this weekend, clearing the way for a final trilateral deal next week.

Kenneth Smith Ramos, speaking at an aluminum industry event in Mexico, said the other two NAFTA countries will finish talks in Washington shortly, after which Mexico will join them to pull together a finished pact.

“We expect an outcome for this Friday or this weekend, and once the bilateral U.S.-Canada part closes, we can review all the compromises trilaterally,” he said, according to Mexican media reports.

Mr. Smith Ramos added that Canada and Mexico agree on “between 85 and 90 per cent” of NAFTA issues.

Foreign Minister Chrystia Freeland returned to Washington on Wednesday to meet with U.S. Trade Representative Robert Lighthizer. She described the talks at his office near the White House as “productive” with “goodwill” from the Americans. Negotiators from the two countries planned to meet again late into the night, she said.

The United States and Mexico reached a preliminary deal to overhaul the continental trade pact last week and are pushing Canada to sign on to it.

Canadian negotiators have focused their efforts on trying to save Chapter 19, a provision that has allowed Canada to challenge U.S. punitive tariffs on softwood lumber and other imports before special trade tribunals. The United States wants the system abolished and Mexico agreed to leave it out of the tentative deal reached last week.

However, he said that there could be “room for flexibility” on dairy-market access.

If Mr. Trump was aware of Mr. Trudeau’s accusation of rule-breaking, he made no mention of it despite addressing NAFTA talks during three different White House events Wednesday. The President has in the past become combative over criticism from Mr. Trudeau, calling him “dishonest and weak” after the Prime Minister told a G7 press conference in June that Canada would not be pushed around by the United States.

Instead, Mr. Trump twice attacked supply management, the system that keeps Canadian dairy prices up in part by putting tariff walls in front of foreign imports.

“They charge tariffs of 300 per cent on dairy products … yet they come and do business with us, and we can’t let that happen,” he said. “We have a very strong position, and we are the one that people want to come in and take advantage of.”

Canadian and U.S. sources with knowledge of the negotiations have said that giving the Trump administration a victory on dairy is key to concluding a deal. While Canada will not dismantle supply management, it is set to offer the United States a percentage of the Canadian dairy market, as well as to change a rule that makes it difficult for American producers to sell ultrafiltered milk, a cheese-making ingredient, in Canada.

One source has said the United States is also looking for Canada to address accusations its dairy producers flood international markets with their products, driving prices down, as well as to address various other rules on ingredients.

“I agree with the Prime Minister in public all of the time and in private 99.99 per cent of the time,” she told reporters gathered in the sweltering afternoon heat outside Mr. Lighthizer’s office when asked about Mr. Trudeau’s comments on Chapter 19.

And she would not make any predictions on how long talks would take. 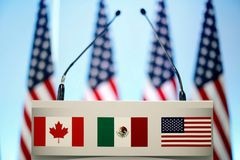 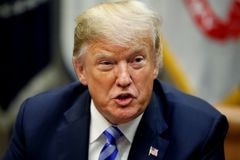 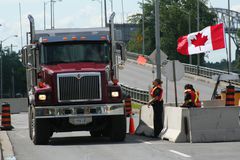