Britain’s banks and insurers must plan for a “hard” Brexit in case a transition period is not in place next March, a senior British regulator said on Thursday in a warning echoed by Brussels.

“With eight months until we exit the European Union in March 2019, it is important we all -- regulators and industry -- continue to plan for a range of scenarios,” said Nausicaa Delfas, head of international strategy at the Financial Conduct Authority.

“Across the FCA, together with colleagues from the Bank of England and the government, we have been working to develop a number of safeguards and contingencies, in the event of a hard Brexit, to ensure that ‘day 1’ works smoothly,” Delfas told an event held by TheCityUK.

Britain and the EU have agreed on a transition deal bridging Brexit in March next year and the end of 2020, but it has yet to be ratified, meaning financial firms based in Britain could face an abrupt end to EU market access.

EU banking, insurance and markets watchdogs have already warned their respective sectors to be ready for a hard Brexit. The bloc’s executive European Commission told EU states on Thursday to “intensify preparedness” for a potentially disruptive Brexit.

Britain has said it and the EU should act to ensure that cross-border financial contracts like derivatives and insurance policies can still be serviced after March, but the EU reiterated on Thursday that it won’t legislate for now.

“In relation to contracts, at this juncture, there does not appear to be an issue of a general nature linked to contract continuity as in principle, even after withdrawal, the performance of existing obligations can continue,” the European Commission said on Thursday.

It is unclear what sort of EU market access financial firms in Britain will have after the transition period ends, prompting many banks and insurers to have new hubs up and running in the bloc by next March to avoid potential disruption.

A group of eight EU states also called for a redoubling of efforts to build a capital markets union in the bloc to provide “stable and cost-effective” funding for EU companies, given that Britain, Europe’s biggest financial center, is leaving.

DO YOUR OWN THING

Britain’s government wants future financial services trade with the EU based on an “enhanced” version of the bloc’s basic “equivalence” regime used by Japan, Switzerland and the United States.

Brussels alone grants access to foreign firms if it deems that their home country rules are equivalent or aligned enough with those in the bloc.

Britain says this is one-sided and wants changes to make it more predictable and transparent. The EU is amending the regime, but its alterations would make it tougher on big foreign trading and clearing firms like those found in the UK’s financial sector.

Hugh Savill, director of regulation at the Association of British Insurers said that even with enhanced equivalence, the EU’s “imperialist” approach to rule-making would have a chilling effect on how UK regulators can supervise markets and consumers.

“Nobody wants to be in the position of a rule taker,” Delfas said.

Antony Manchester, head of Brexit at asset manager BlackRock said enhanced equivalence can be made to work, but Britain and the EU have different ideas on what it means.

“In these debates on equivalence... the UK and EU are quite evenly matched in terms of financial services. That means we will see something more like the negotiations between the EU and U.S., where we give and take on both sides,” Manchester said.

But the EU and United States took four years to agree equivalence on a rules just for clearing derivatives, raising concerns in Britain over what the City financial district could face after Brexit.

Manchester, a former UK Treasury official, said if Brussels does not deem a UK firm to be equivalent, British regulators could choose to “do our own thing,” raising concerns about predictability for international financial firms 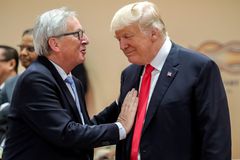