Unifor says it has launched a strike at the Downsview facility in north Toronto as negotiations continue separately with De Havilland and Bombardier Inc .

The union said workers from Local 673 and Local 112 walked off the job as threatened just after 10 a.m., two days after talks resumed after a three-week cooling-off period.

About 1,500 unionized Bombardier workers and 700 De Havilland employees at the plant manufacture Bombardier’s Global business aircraft and, until recently, the Dash 8 turboprops for De Havilland Canada.

“We will remain at the bargaining table with both companies as the strike action is ongoing,” said Unifor national president Jerry Dias.

“Our union will continue to make every effort to reach a fair settlement, but we have a number of key issues to resolve with both employers.”

Pensions, use of contractors and erosion of bargaining unit work are key issues at Bombardier while the future of the Dash 8 program is the focus of talks with De Havilland.

Other issues relate to the sale of the Downsview site in 2018 and both companies’ planned exit of the facility, Mr. Dias added in a news release.

“Our members work hard and deserve nothing less than an agreement that values their incredible contribution to these companies and respects their hard work,” said Maryellen McIlmoyle, president of Unifor Local 673 which represents technical, office, and professional workers at both companies.

Bombardier says 800 of its non-union workers at Downsview remain active with some working from home due to COVID-19 protocols.

“At this time, the talks continue and we are focused on seeing the process through to an agreement,” spokesman Mark Masluch wrote in an e-mail.

De Havilland Canada said it was disappointed with the union’s statements before the resumption of talks and at the bargaining table that “assert a position that is drastically out of step with the realities facing De Havilland Canada’s business, and the aviation industry more generally.”

The company said it agreed to the union’s request for a 30-day extension of the collective bargaining agreement in the hope that it would use the time to “adjust its negotiating posture to enable a mutually agreeable outcome.”

“De Havilland Canada is eager to collaborate with the Union as we chart a sustainable long-term future for aircraft manufacturing and the skilled employment it supports. But the ability to work together toward a long-term future relies on a concerted effort to transform the business to the circumstances we are facing.”

The company said it has put contingency plans in place in order to continue to meet all customer requirements.

De Havilland announced earlier this year that it would no longer produce new Q400 aircraft at the facility beyond currently confirmed orders. De Havilland indicated two years ago that work will end at Downsview once lease agreements for the land expire.

The union wants De Havilland, whose parent company Longview Aviation Capital Corp. purchased the Dash 8 program from Bombardier for $300-million in June, 2019, to commit to making the Dash 8 somewhere in Greater Toronto when production resumes.

Mr. Dias has said he fears De Havilland plans to move production to its facilities in Alberta.

He said the company refused to bargain any sort of scope clauses that would limit production to somewhere in the GTA, including Pearson International Airport where Bombardier has broken ground on a new facility for its Global business jets.

“Their silence on the matter is very troublesome,” he said in a Friday interview. “The bottom line is we’ve got a lot of people have worked there for a lot of years and have worked on this program and they deserve the right to continue to build the program.” 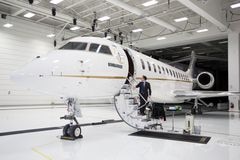