The union representing employees who refuel the planes at two Montreal airports will return to the negotiating table Thursday morning after a second straight day on the picket lines, though there was uncertainly late Wednesday around the timeline for relaunching formal talks.

Union spokesman Michel Richer initially said the two sides had agreed to meet the following morning beginning at 10 a.m. However, Swissport Canada said late Wednesday that it had received a call by mediators to “stand by” for the moment and that “we will not be at the table at 10 a.m. tomorrow” for the initial meeting between the union and the mediator.

Nathalie Bergeron, who represents a PR firm speaking on behalf of Swissport, said “there was no question” the company was ready to negotiate on Thursday when called upon.

Richer, reached late Wednesday, said “the negotiation process is relaunched.” He said the union would meet the mediators in the morning ahead of the expected resumption of talks with Swissport.

In the meantime, strikers returned to the picket lines for a demonstration at Trudeau airport at 2 p.m.

“We’re staying on strike for as long as we haven’t signed a contract,” Richer said.

Roughly 100 employees with Swissport Canada, the only supplier of fuel for airlines operating out of Montreal’s cargo airfield in Mirabel and the city’s main airport, Montreal-Trudeau International, walked off the job around 11 a.m. yesterday, several days after having voted to reject a tentative contract deal.

In a statement, Swissport Canada said it had reached out to the other side to invite them to meet “as soon as possible” to resume discussions. The union confirmed having received a letter on Wednesday morning.

The company has been successfully maintaining fuelling service at both airports with a team of trained managers from around the country, and said there had been no flight delays because of the strike.

“As of 11 a.m. yesterday, our team has taken over refuelling operations at YUL and YMX and we can confirm activities continued without any delay or incident,” Swissport said in a statement on Wednesday morning.

“So far today, things are running smoothly and we are confident our operations continuity plan will continue to allow us to service our customers efficiently.”

While the departures board at Trudeau airport showed a number of delayed planes, the airport said they were due to weather conditions over the past few days and not the strike.

Salaries and work-life balance are the main points of contention between Swissport and its Montreal-area workers, who have been without a contract since August.

Swissport complained to the Canada Industrial Relations Board on Tuesday, saying the union was negotiating in bad faith and asking the board to suspend the strike. The board ruled the union could maintain its strike, but ordered their union immediately back to the negotiating table.

According to the labour board ruling, the tentative deal included a provision that the union would recommend its members vote in favour of it.

The board said the union didn’t tell Swissport about the vote result. Instead, the union gave the company a 72-hour strike notice before making new demands “that were estimated to be more than double what was in the tentative contract deal.”

The board ordered the union to drop these new demands as it heads back to the table. 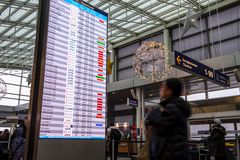