Projections of a sharp slowdown in U.S. shale production in the next couple years could bode well for demand for Canadian oil, but the sector still must contend with stalled pipelines and a transportation capacity crunch.

According to some analysts, an abrupt slowing in shale output south of the 49th parallel over the next year or so is looking increasingly likely. The United States’ loosening grip on the shale market is being attributed to tighter financial restrictions on new projects, stalling productivity gains and a decline in profitable wells.

A recent global oil report by Goldman Sachs argued that production outside the group’s countries is set to stop growing around 2021. That could be welcome news for countries that are showing some production growth in coming years, such as Canada.

Jackie Forrest, a research director with ARC Energy Research Institute in Calgary, called the projection “interesting” but urged caution, saying it will depend on the overall oil demand growth, which could be modest, particularly if a recession hits.

If shale does indeed slip the way Goldman Sachs predicts, it expects the Gulf States to pick up the supply slack thanks to a probable production decline from deepwater OPEC members such as Nigeria and Angola and little chance of Venezuela coming back online any time soon.

It also eyed Guyana as a potential bright spot in the supply market thanks to a combination of recent discoveries and the country’s exploration incentives combining for “highly economic” oil production.

For Canada, the report painted a mixed picture.

On one hand, it predicted that a cache of planned smaller projects aimed at easing supply bottlenecks here will increase production by up to around 100,000 or 200,000 barrels a day to 2025.

In Alberta, for example, Rangeland Midstream last week started construction of its Marten Hills pipeline system. Expected to come online in 2020, it will bring crude and condensate to Edmonton refineries.

Yet, supply route headaches from the Athabasca region continue.

Because of those transportation woes, said GMP FirstEnergy analyst Michael Dunn, “it’s not like Canada can jump in and supply it” if U.S. shale does wane.

With production capacity outstripping export ability, Goldman and Sachs was blunt in its assessment: “Further material growth is likely to be dependent on new pipeline capacity.”

Mr. Dunn is not expecting any major progress on much-needed pipelines over the next couple of years, no matter which party lands in government.

For investors, the Trans Mountain expansion (TMX) in particular has turned out to be something of a “boy who cried pipelines” scenario, as the project’s development has been repeatedly delayed by legal challenges and regulatory requirements.

“After several years of being fooled by this – they’ve been fooled once, twice, three times – they’re not willing to be fooled again,” Mr. Dunn said.

Federal Conservative Leader Andrew Scheer has said he would declare pipeline construction in the national interest, which he argues will get the Trans Mountain expansion and others built faster. The Liberals also back Trans Mountain – Justin Trudeau’s government bought it on behalf of taxpayers for $4.5-billion – and other pipeline developments.

But the possibility of a minority government throws another wrench in the works. NDP Leader Jagmeet Singh is opposed to TMX and has promised provinces the power to veto pipeline projects running through their jurisdiction.

“If the Liberals do indeed want to get the pipeline completed, what leverage would the NDP have over them? Will there be a 'you scratch my back and I’ll scratch yours’ arrangement? That remains to be seen,” Mr. Dunn said. 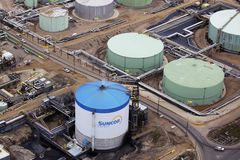 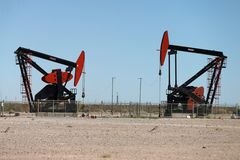