A key decision from the U.S. government is coming this week on newsprint, one of the many fronts in the broadening Canada-U.S. trade battle, with divergent industries on both sides of the border holding out slim hope of some relief from the punishing levies imposed on Canadian supplies.

On Wednesday, the U.S. Department of Commerce will meet to make a final determination on the 22.16-per-cent preliminary anti-dumping tariffs it slapped in March on most Canadian uncoated groundwood paper, which includes newsprint and book-grade paper. The levy is on top of a countervailing duty averaging 6.53 per cent that was applied in January. A public announcement of the department’s decision is set for Thursday.

In a year when the United States has unleashed tariffs on Canadian lumber, steel and aluminum, and threatened to hit Canada’s auto sector, newsprint has received much less attention on the Canadian side of the border than those other high-profile disputes. Nevertheless, Canada’s newsprint industry is feeling the pinch as the tariffs disrupt U.S. exports, which represent $100-million a month of business.

The tariffs have garnered more public attention in the United States, as the spike in costs triggered by the tariffs pushes beleaguered newspapers to the brink. With newsprint prices up about 30 per cent over the past year, many American publishers - already suffering from years of shrinking advertising revenues and declining readership - have been forced to lay off staff, cut their page counts, drop sections and even reduce the number of days a week that they publish.

“We’ve taken a number of measures to reduce expenses,” said Tampa Bay Times chairman and CEO Paul Tash, who slashed 50 jobs and made other cuts at his Florida daily earlier this year - and published an editorial informing readers that the newsprint tariffs were directly to blame. “But the price keeps rising even as we drop our consumption.”

As publishers tread water while hoping that the U.S. government will reconsider or at least reduce the newsprint levy - either in this week’s Commerce ruling, or in another decision by the U.S. International Trade Commission (ITC) in late August - politicians on both sides of the aisle in Washington have been lining up to oppose the tariffs, coming to the support of reeling papers back home.

“I think it’s still an uphill battle, but maybe we’ll gain some ground,” said Mr. Tash, who estimates that the price increase amounts to a US$3.5-million-a-year cost hit for his paper. “We’ll see.”

For Canadian producers, the impact of higher newsprint prices has also been substantial, resulting in decreased demand from U.S. customers. Canadian shipments of newsprint into the United States in May fell 18 per cent compared with the same month in 2017, according to Statistics Canada.

Kevin Mason, managing director at ERA Forest Products Research, said the trend of declining newsprint exports into the United States continued in June, though many Canadian producers have started to increase shipments to East Asia and India.

The weighted average price for benchmark newsprint supplies hit US$753 a tonne in July, up 30 per cent from US$580 a tonne in the same month in 2017. Mr. Mason said actual prices paid in July have varied between US$731 and US$817 a tonne.

Canadian producers have been able to pass most or all of the tariffs on to U.S. customers - which has meant that publishers and printers south of the border have suffered the brunt of the U.S. tariffs.

“Newspapers’ biggest cost is labour and the second-biggest is newsprint,” Mr. Mason said. “Newspapers have been cutting costs to the bone already, so to get a sudden jump in your newsprint costs, that’s huge.”

The outcry from publishers caught the attention of Washington lawmakers. Nineteen members of Congress testified at a July 17 hearing held by the ITC, with the bipartisan group of politicians opposing the tariffs.

“There’s political pressure from the House of Representatives and Senate, and they’re saying the tariffs should be removed because newspapers are being hurt. But cynically speaking, President Trump doesn’t like American newspapers,” Mr. Mason said.

Steve Persall, a veteran movie critic at the Tampa Bay Times who lost his job in the cuts, has become one of those cynics. He’s not sure if the U.S. government stopped to consider the impact the tariffs would have on his paper and the struggling industry, or simply didn’t care.

"I really didn’t expect it would be your own government, I won’t say turning against you, but just not considering,” he said.

While Canadian producers and the U.S. newsprint consumers don’t have high hopes that the Commerce department will cancel or dramatically reduce the tariffs in this week’s ruling, some are guardedly optimistic that they’ll have better luck with the ITC. The U.S. quasi-judicial trade agency is scheduled to vote Aug. 28 on whether to uphold its preliminary finding last year that Canadian groundwood shipments have injured the U.S. mills. The ITC’s reasons for its decision are slated to be released on Sept. 17.

The case has its roots in Washington State, where North Pacific Paper Co., also known as Norpac, produces groundwood. Norpac, which is owned by hedge fund One Rock Capital Partners LLC of New York, first lodged its complaint with the Commerce Department in August, 2017.

“These subsidies artificially lower the costs of Canadian producers and threaten additional material injury to unsubsidized U.S. producers who have to compete with them,” Norpac said in documents filed earlier this month to the ITC.

Norpac argues that the tariffs translate into only 2 US cents a copy in extra newsprint costs in some instances, but U.S. newspapers say the cost is considerably higher.

In April, Canadian newsprint accounted for an estimated 65 per cent of U.S. demand. That has meant that the majority of businesses that need newsprint can’t switch to U.S. producers to avoid the increased costs from the tariffs. The excess supplies simply don’t exist. In any case, newsprint prices charged by U.S. mills have climbed sharply over the past year amid an overall decrease in production south of the border.

“If the tariffs continue, the harm will extend to newspapers, commercial printing and book publishing operations, and throughout the supply chain such as paper manufacturers, ink suppliers, fuel producers and equipment manufacturers,” said a July letter from lobby group Stop Tariffs On Printers and Publishers (STOPP), sent to the ITC’s new chairman, David Johanson.

Norpac has boasted that additional business coming its way as a result of the tariffs has allowed it to restart an idled paper machine and hire an additional 50 people. But Pat Henderson, director of government affairs at Quad Graphics Inc., the biggest commercial printer in the United States and one of the country’s biggest newsprint consumers, counters that that’s dwarfed by the number of printing and publishing jobs that the tariffs put at risk.

“There are 3,000 people at Quad Graphics alone who work in our retail-insert space, and books, and anyone [else] who is touching uncoated groundwood paper,” he said. “We’re putting a lot of people at risk to make sure that one company on the West Coast has the ability to reopen a paper machine.” 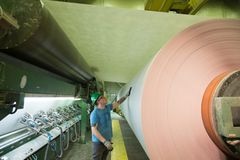 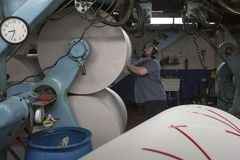 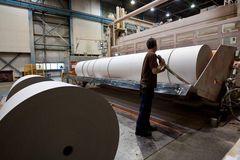 Follow David Parkinson and Brent Jang on Twitter @ParkinsonGlobe @brentcjang
Report an error Editorial code of conduct
Due to technical reasons, we have temporarily removed commenting from our articles. We hope to have this fixed soon. Thank you for your patience. If you are looking to give feedback on our new site, please send it along to feedback@globeandmail.com. If you want to write a letter to the editor, please forward to letters@globeandmail.com.
Comments