A major Shopify Inc. client has filed an injunction against the Ottawa-based e-commerce platform in an Ontario court to restore its web store, in a significant test of its policy affecting hate and violence. The store was shut down last week over user-uploaded clothing designs that allegedly promoted imagery affiliated with groups connected with conspiracy theories, violence and terrorism.

Cleveland-based RageOn Inc. allows users from around the world to upload and sell designs on its platform, which uses Shopify tools for e-commerce functions. RageOn says it has nearly one million customers who have made more than 100 million products with its technology that allows an image to be printed in full colour across shirts, blankets or yoga mats.

Typical designs range from kitten collages to shirts that create the appearance of a shirtless torso with a tank-top tan line. But RageOn said in a civil claim, filed with the Ontario Superior Court of Justice this week, that Shopify shut down its platform on Feb. 17 for breaching its Acceptable Use Policy over designs that referenced terrorist group the Proud Boys, the QAnon conspiracy movement and an allegedly “satirical” shirt depicting a “Nazi fire rainbow unicorn.”

The RageOn injunction request will test the applicability of Shopify’s Acceptable Use Policy while highlighting the difficulty of policing user behaviour on the platforms that increasingly dominate digital life and commerce. Shopify has been accused of inconsistently applying the policy for years, most recently shutting down former U.S. president Donald Trump’s official web stores after he helped incite the Jan. 6 Capitol riot, despite leaving stores up from his supporters offering similar merchandise.

“RageOn was terminated for continued violation of our Acceptable Use Policy,” the company said by e-mail Thursday when asked about the injunction. “Shopify does not tolerate content that promotes or condones hate, violence, or terrorist organizations as set out in our AUP.”

But Mike Krilivsky, RageOn’s chief executive officer and co-founder, said in an interview that Shopify’s decision was ironic, given it markets itself as one of the world’s biggest boosters of entrepreneurship.

“They just shut down nearly a million entrepreneurs with a single swoop,” he said. To do so because “maybe there were a couple bad actors” was “overkill,” he added.

Mr. Krilivsky said he has a long history with Shopify, starting about 13 years ago when he was an early user selling wares for his record label.

After what he’s described in numerous online outlets as a subsequent near-fatal accident, he turned a partying catchphrase – “Let’s Rage!” – into a celebration of life. He said RageOn, which launched on Shopify in 2014, was an extension of this mantra.

For years, Mr. Krilivsky and Shopify had a supportive relationship. Shopify profiled him on its website in 2016, and he even lists himself as an “investor” on his LinkedIn profile, after buying shares after its initial public offering.

Shopify’s Acceptable Use Policy says the company prohibits a variety of activities, including hosting anything that would promote or support violence. But RageOn’s court filing alleges that it has recently made additions to its list of prohibited behaviour “without notice.”

Before last June, “Shopify was content that any of its vendors sold items bearing the image of the Confederate flag, and Q-Anon paraphernalia,” the filing alleges. At that point, it continues, Shopify notified RageOn that it was breaching the policy for showing items with such imagery.

RageOn argues that the materials banned under the Acceptable Use Policy are vague. The filing says it has taken “all reasonable measures” to remove user-uploaded designs with offending images and to screen for new uploads that may be offensive. It uses both URL and word filters to prevent such uploads, as Shopify does.

The filing says it has asked Shopify for an up-to-date list of keywords to filter to comply with its policy, but that Shopify has “repeatedly and explicitly refused to do so.”

The filing also says that the images that prompted the shutdown last week, including reference to QAnon and the Proud Boys, had been uploaded “prior to Shopify’s prohibition against such images. … No prior notice was given to RageOn that these images were in contravention of the AUP. The first notice was minutes before Shopify shut down the website.”

RageOn is represented by Beard Winter LLP in Toronto. It is seeking damages of $250,000. But, Mr. Krilivsky said, “All we want is a chance to make things right, and to continue the very good partnership we have with Shopify.”

Johnathan Nightingale, a founder and partner of Toronto’s Raw Signal Group, which does management training for fast-growing startups, has long called for more consistent application of Shopify’s Acceptable Use Policy.

He said the decision was “striking,” because Shopify’s concerns with RageOn could also apply to Shopify itself, given its history of hosting users supporting “awful” causes. “But it’s great news to hear they’re taking action in taking hateful content off their site,” he said.

Shopify CEO Tobi Lutke previously defended hosting a store for far-right news website Breitbart, which has been accused of promoting hate speech, in a 2017 blog post after receiving more than 10,000 tweets and messages asking him to take the store down. He argued that “products are a form of speech, and free speech must be fiercely protected.”

Shopify did ban some far-right-wing groups, including the Proud Boys in 2018. Mr. Lutke updated the post that year, saying the company “allows space for all types of products, even the ones that we disagree with, but not for the kind of products intended to harm.” 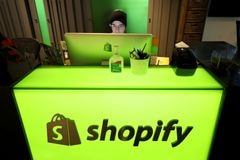 Tobi vs. Goliath: How Shopify is bracing for a looming battle with Amazon
Subscriber content
February 17, 2021 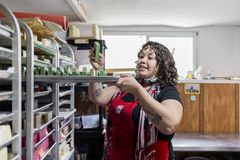