Vancouver’s BBTV Holdings Inc. had a rough start on the Toronto Stock Exchange on Wednesday, overshadowing its milestone of completing Canada’s largest initial public offering of a company led by a sole female founder.

Subordinated voting shares of BBTV, the parent of online video platform BroadbandTV, traded down all day and closed at $15, or 6.3 per cent off its $16 issue price, as stocks fell broadly on North American markets. BBTV raised $172.4-million in the IPO.

BBTV chief executive officer Shahrzad Rafati shook off the debut, saying in an interview Wednesday, "I’m not at all [worried] day one may not be the way we wanted it to be. Markets can be sometimes tough. We’re in it for the long game. We definitely want to get traction today but we’re building a very strong business.”

Ms. Rafati, who holds 83-per-cent voting control after the IPO, said the offering is “breaking important new ground and paving the way for countless women and girls who envision a future with more potential to be leaders.”

Two sources familiar with the deal said investor demand was relatively tepid, as BBTV received orders for stock equal to twice the offering’s value and priced the shares at the low end of a $14 to $22 range set by underwriters. That compares with several recent Canadian technology deals that were upsized after receiving orders 10 times or greater than the offering sizes. Canaccord Genuity and Scotia Capital led the underwriting syndicate.

BroadbandTV helps video creators make more money from advertising that runs with their content on YouTube, Facebook and other online channels than if they posted it themselves. With the collective heft of its platform, BroadbandTV – the second-largest online video purveyor behind Google – sells aggregated content to advertisers in packages, which helps increase views and revenue for creators. BroadbandTV videos had 439 billion views in the past year.

The main purpose of the IPO was to end a standoff between Ms. Rafati and European media giant Bertelsmann SE & Co., which bought 51 per cent of BroadbandTV through its RTL Group subsidiary for $36-million in 2013. The deal gave RTL and the minority shareholders the right to buy each other out or drag the other into a sale. Ms. Rafati stayed on to run BroadbandTV.

But in January, 2017, RTL declined to exercise its buyout right. At the time Ms. Rafati said BroadbandTV was “definitely” worth US$1-billion. (Its market capitalization was $308-million at Wednesday’s close). But RTL chose not to pay the amount determined in a fair market value assessment. Finally last year, RTL agreed to sell its stake to the minority shareholders for $158.8-million, which culminated with the IPO. BBTV was a holding company for their BroadbandTV stake; it now owns the entity outright.

BroadbandTV generated $372.4-million in revenue in 2019 but 89.5 per cent of that was paid out to content creators, meaning effective revenue was closer to $40-million. It lost $8.2-million last year.

The company has been pushing to sell "value-added” services to creators, such as direct advertising campaigns and mobile app creation. That business carries much higher margins and accounts for less than 30 per cent of BroadbandTV’s gross profit. Ms. Rafati said the company had a “multibillion-dollar opportunity” to move more existing creator clients to higher-value services.

Revenue was also soft early in the pandemic. But Ms. Rafati said page views and revenue rose 15 per cent and 25 per cent, respectively, in the third quarter, adding BroadbandTV would post “similar growth rates ... moving forward.” 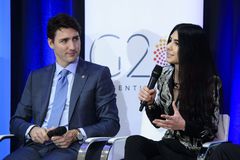