When the founders of PizzaForno began rolling out automated, around-the-clock pizza ovens in Canada, they spent months perfecting recipes.

“We anticipated the No. 1 challenge we were going to have was convincing consumers that they could get a great quality, artisanal pizza out of a machine,” president and co-founder Les Tomlin says.

While it started out slow, he says interest has grown exponentially during the pandemic. The company’s pizza oven in the Ontario tourist town of Tobermory was the most successful pizza machine in the world by sales volume in August, Mr. Tomlin says.

And with the pandemic accelerating the automation of the restaurant industry, everything from gourmet cappuccino and artisanal pizza to fresh salads and buttercream frosted cake can now be bought from a vending machine.

The vending machine stigma of bad coffee and stale food may linger, but experts say the robotic kiosks and automats of today are challenging the notion that increasing convenience means sacrificing quality.

The new automated restaurants are serving fresh, made-to-order food and beverages that some say rival the quality of conventional food service.

“It’s not just some microwave pizza from a vending machine,” says Dana McCauley, director of new venture creation in the University of Guelph’s Research Innovation Office.

Mr. Tomlin claims PizzaForno has carved out a whole new segment in the pizza category. “The low-touch economy is here to stay,” he says.

The company now has 22 units in operation and another 85 on order, and is receiving dozens of licensee inquiries a week.

It’s part of a rapid growth in the automation of restaurants and cafés as consumers seek out options that involve little to no human contact.

“Access to food that hasn’t been touched by anybody is very appealing in this day and age,” Ms. McCauley says.

The demand is spurring investments in automation and robotics.

“Financially it didn’t make a lot of sense before because the demand just wasn’t there,” says Saibal Ray, a professor in the Bensadoun School of Retail Management at McGill University.

“But the pandemic has changed that. The financial investments in automation are happening much faster than we anticipated.”

“It’s the same quality coffee you’d get from a barista at a café,” says Brad Ford, general manager of RC Coffee, the tech firm behind the robotic barista.

“The only thing missing is the human element and doing the latte art on top, which we may eventually be able to do with a robotic arm.”

While the automat is an old concept that traces its origins to late 18th-century Berlin, today’s automated restaurant infuses technology into nearly every step with customers often ordering and paying from a smartphone.

“The app brought back the automat,” says restaurateur Mohamad Fakih, the president and chief executive of Paramount Fine Foods. The company operates multiple restaurants including Box’d, a fully automated restaurant that opened in June using a digital cubby technology.

“We knew the automat was the answer for the bottleneck in our industry. We just had to digitize it.”

The restaurant’s kitchen – staffed with human chefs – prepares the food and places orders in a sanitized box, which customers pick up on the other side, eliminating the need for a server or cashier.

Automation has raised concerns about robots replacing jobs, as machines take over duties once performed by humans.

But Mr. Fakih says the Box’d restaurant is able to process more orders, moving front-of-house staff into the kitchen.

“We need more chefs in the kitchen and more people delivering the food,” he says. “We’ve also created a new position called a concierge to greet people when they arrive and help them take an order if they’re not digitally savvy.”

More than 10,000 restaurants have closed since the start of the pandemic, a staggering number that increases every day, says Todd Barclay, president and CEO of Restaurants Canada.

“It’s been catastrophic,” he says. “Those who are still open say they’re barely keeping their nose above water.”

Mr. Barclay says technology will play a role in the restaurants of the future, with increasing automation continuing after the pandemic, especially in more casual dining settings.

But he says there’s also a massive pent-up demand for the human connection and social interaction eateries can offer.

“Many people tell me they can’t wait to sit down with their friends and family and enjoy the hustle and bustle and noise of a typical restaurant because we’re social creatures,” Mr. Barclay says.

Still, Ms. McCauley says automated restaurants will likely thrive in high-volume settings, such as food courts, as well as places that don’t justify opening a full café or restaurant, such as a ferry terminal.

It will also help restaurants with the cost of doing business.

Jarrett Vaughan, professor in the Sauder School of Business at the University of British Columbia, says labour is often 30 per cent to 40 per cent of a restaurant’s overhead.

He says automation could help reduce those costs and potentially be more reliable.

“It can be hard to find a labour force in some areas, especially in city centres where it’s more expensive to live,” Prof. Vaughan says.

Opinion
Canada’s restaurants are losing hope for making it to 2021
December 4, 2020 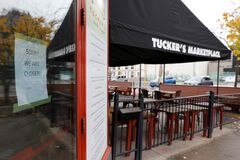 Rise of the automats: From coffee to meals to dessert, digital vending machines serve it all at the touch of a button
November 17, 2020 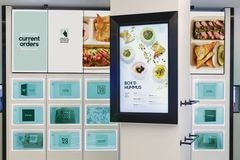 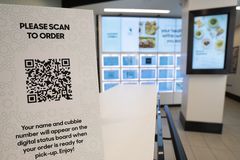