Walmart Canada Corp. is upping the ante in the online grocery wars.

The U.S.-owned discount giant, which has expanded its grocery offerings over the past 12 years, is launching same-day grocery e-commerce deliveries in parts of the Greater Toronto Area on Thursday and in Winnipeg later this month.

Walmart is teaming with U.S.-based delivery service Instacart for home delivery, which starts at $3.99 plus 7.5 per cent of the order for purchases of more than $35. Delivery within the hour costs an extra $5. Or customers can pay $99 a year or $9.99 a month for unlimited deliveries.

Loblaw Cos. Ltd., the country’s largest supermarket retailer, rolled out a premium-priced delivery service in partnership with Instacart late last year. Loblaw also offers its PC Express click-and-collect e-commerce business, which allows customers to pick up their online orders at stores or other locations. (Walmart also has grocery pick-ups and next-day deliveries.)

Walmart Canada’s same-day service is being launched as a pilot, and the company will decide whether to expand it to other cities. Other grocers are preparing for cyber-order deliveries or already provide them to varying degrees.

“We believe that the more options we can provide in these urban centres, specifically, gives us a real advantage,” Daryl Porter, vice-president of omni-channel operations and online grocery at Walmart Canada, said in an interview.

The BMO survey of 750 Canadians found that 48 per cent of respondents had used online grocery services occasionally, and Amazon.ca was their preferred cyber-destination, even though it provides only packaged groceries and no fresh or frozen products.

Still, Loblaw chief executive officer Galen G. Weston told analysts in July the company is “very pleased” with the progress of PC Express (now at 541 locations) as well as its home delivery partnership with Instacart.

“We’re on track to deliver the numbers we expect for the year,” he said.

Loblaw has found that customers tend to spend more in a click-and-collect order than in a home-delivery purchase, Mr. Weston said in May.

Nilam Ganenthiran, chief business officer at Instacart and a Toronto resident, said the company’s Canadian business is meeting or beating its expectations.

He said Instacart, which works with major U.S. chains including Walmart-owned Sam’s Club, has 5,000 people in Canada picking, packing and delivering groceries. Instacart delivers for more than 250 Loblaw stores across the country in 13 markets. It will charge the same delivery fees to Walmart customers as it does to those at Loblaw, he said.

“We have changed the level of service and the offering to customers dramatically,” he said. “It’s yet another sign that groceries are coming online and the customer will get to decide.”

“The faster you can make delivery, the more satisfied customers will be, and the more customers you will acquire,” said Mr. Rawat, whose Urbery startup failed to find a big enough retailer to do deliveries economically.

Walmart’s Mr. Porter said the company is assessing several e-commerce delivery options. It offers next-day deliveries for $9.97 on orders of $50 or more in certain areas by teaming with JoeyCo and Penguin Pick-Up, which is operated by Walmart’s real estate partner, SmartCentres. It also uses its own trucks for some deliveries. The initiatives allow Walmart to operate in densely populated city areas where it has not been able to gain a foothold for its superstores.

While online selling makes up just 0.8 per cent of Canada’s estimated $100-billion-plus in annual grocery sales, that is expected to increase to 2.5 per cent in five years, Sobeys' research says.

Mr. Porter said if the same-day delivery test is successful, Walmart will assess other cities for expansion. 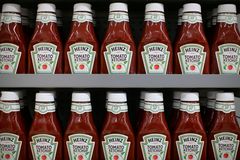 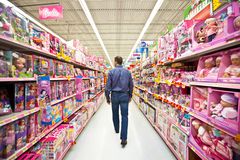 Grocery stores take cues from restaurants in bid to get shoppers to stay longer
August 24, 2018 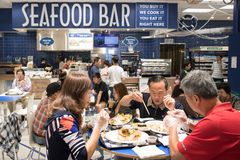