At least three members of Waterfront Toronto’s digital-strategy advisory panel say they may resign following a key meeting on Thursday if the government agency doesn’t address their concerns over its proposed development partnership with Sidewalk Labs.

Sidewalk, a subsidiary of Google parent Alphabet Inc., is developing the project known as Quayside in conjunction with Waterfront Toronto. In April, the agency representing all three levels of government struck a panel to advise on tech policies for the 12-acre development.

That panel has already seen two high-profile resignations. Earlier this month, Saadia Muzaffar departed over what she called “utter lack of leadership regarding shaky public trust” over Waterfront’s partnership with Sidewalk. Long-time venture capitalist John Ruffolo resigned in the summer.

After months of queries and criticism from Canadian innovators frustrated by a lack of clarity over who will own and manage the data generated by the sensor-rich neighbourhood, Sidewalk released a data-governance proposal on Monday, offering to house the project’s urban data, such as those from pedestrian-counting technology, in an independent trust for anyone to access. The proposal tries to address some of the criticism by asserting that Sidewalk would not have preferential access to the data, nor an advantage in creating products to monetize it.

But several digital-strategy panel members, who will discuss the proposal at the Thursday meeting, told The Globe and Mail they remain worried about the project and its timeline.

“My ongoing participation will depend on the progress we make" at the meeting, said panelist Pamela Robinson, an urban-planning professor and associate dean at Ryerson University. The panel, she said, needs a strong transparent process and continuing access to “real substance" in order for its feedback on data governance and technology to make a difference.

Fellow panel member Andrew Clement, professor emeritus at the University of Toronto’s faculty of information, said that it should be Waterfront Toronto that articulates a policy framework that guides Sidewalk’s proposal. He continued: “It’s fundamental of the consultation process that it be independent of the interests that are driving it.”

Along with Mr. Clement and Ms. Robinson, Teresa Scassa, the Canada Research Chair in Information Law and Policy at the University of Ottawa, said she would consider resigning depending on the meeting’s outcome.

Ms. Scassa said she worried that the sudden rush to get Sidewalk’s data-governance strategy in front of the panel left members ill prepared to challenge some of the assumptions she saw built into it, including who has access to the Quayside project’s data. “I’m probably not the only one who’s wondering if we are meant to be window dressing,” she said in an interview on Tuesday.

Kurtis McBride, chief executive of Kitchener, Ont.-based traffic analytics company Miovision, told The Globe he is waiting to hear more on Thursday about a technical issue in Sidewalk’s digital-governance proposal, concerning how cities could derive economic benefit from their data, before making a decision about his future on the panel.

Their departure from the panel would mark a significant loss of academic and smart-city technology expertise as Waterfront attempts to build a world-leading smart community, just as the project faces increasing scrutiny one year after the Sidewalk-Waterfront partnership was first made public.

Ontario Infrastructure Minister Monte McNaughton said in an interview this week that he is asking “tough questions" about the tripartite agency’s governance. “We need to make sure that Canadian privacy laws are followed. … My staff has met with Waterfront Toronto, and we want to make sure that Ontario wins in this deal.”

And Toronto mayoral challenger Jennifer Keesmaat on Tuesday singled out Waterfront Toronto and its dealings with Sidewalk Labs as she announced a call for a “transparency review” of key city-affiliated agencies. While incumbent John Tory has said he believes the Sidewalk project will be good for Toronto, he added that there remained “unanswered questions” about data and privacy that need to be addressed.

Not all digital-strategy panel members are frustrated about its progress. “I’m going into the meeting with a positive attitude,” said Michael Geist, its interim chair and the Canada Research Chair in Internet and E-commerce Law at the University of Ottawa. “My hope is it would be the first of a number of meetings, and there’d be plenty of time to address issues as they arise.”

Mark Wilson, who is both a former chair of Waterfront Toronto and a long-time executive with IBM Corp., said he recognized the frustration that many other current and former digital-strategy panelists – including Ms. Muzaffar – have expressed over the lack of detail the panel has been given so far. Still, he said of the data-governance proposal, “I’m cautiously optimistic that we have something of substance to deal with."

Waterfront Toronto said through its spokeswoman Carol Webb that it has “heard the concerns” raised by the panelists and takes “this very seriously.”

“We are committed to improving the function and effectiveness of the panel and this discourse, and how we can improve," she said in an e-mail. "The proposal put forward by Sidewalk Labs starts an important conversation and consultation around digital governance. It is an opportunity to ask for clarifications, more explanation and gather information. It’s the first step in a new process, nothing is set or final.”

Ms. Webb said questions about intellectual-property ownership will be addressed at a subsequent panel meeting and it will be on a public agenda. “We have to take this in bite-size pieces; it’s that big, and we intend to get it right.”

The digital-strategy advisory panel is one of two high-profile groups to meet discussing the proposed waterfront development this week. On Wednesday, Sidewalk’s own advisory council – an invitation-only committee revealed last week by open-data advocate Bianca Wylie – will see a group of pan-industry executives discuss the project over lunch.

The Globe contacted each of the panel’s 13 members for this story. Not everyone responded; Charles Finley, the global director of marketing for IBI Group, and Kevin Tuer, managing director of Canada’s Open Data Exchange, declined to comment.

With reports from Laura Stone and Jeff Gray

Sidewalk Labs says it will not own data collected in public places
October 15, 2018 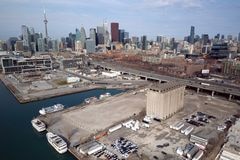 Oct. 15: An SOS on carbon. Plus other letters to the editor
October 15, 2018
Follow Josh O’Kane on Twitter @joshokane
Report an error Editorial code of conduct
Due to technical reasons, we have temporarily removed commenting from our articles. We hope to have this fixed soon. Thank you for your patience. If you are looking to give feedback on our new site, please send it along to feedback@globeandmail.com. If you want to write a letter to the editor, please forward to letters@globeandmail.com.
Comments