Waterfront Toronto executives told the federal ethics committee Thursday that the agency’s initial agreement to develop a smart city with Google sister firm Sidewalk Labs was not as detailed as it could have been – while denying accusations that the partnership was first brokered by the federal Liberal government.

Waterfront Toronto’s chief development officer Meg Davis, as well as Kristina Verner, its vice-president of innovation, sustainability and prosperity, faced questions from MPs over the origin, data governance and privacy implications of the smart-city deal. While many details they provided were previously public, Ms. Davis and Ms. Verner shed some light on the project’s beginnings in exchanges with NDP ethics critic Charlie Angus and Liberal MP Adam Vaughan, whose downtown Toronto riding includes the proposed smart-city site, called Quayside.

The digital urban-planning firm Sidewalk and Waterfront Toronto announced the partnership to develop a digitally connected community on the 12-acre site in October, 2017, with the agency’s board expected to vote on proceeding with the project later this year. The project has garnered increasing criticism in recent months, as tech leaders warned of potential hazards to privacy and Canadian-bred innovation. Numerous advisers resigned over similar concerns, as well as unclear details about how the project would proceed; and Ontario’s auditor-general wrote that the process had insufficient government oversight and timelines. Last week the Toronto Star reported that Sidewalk internally was hoping to take a cut of income streams including property taxes and development fees in exchange for funding a waterfront light-rail transit route.

Mr. Angus brought up many concerns about the request-for-proposals (RFP) process, noting that the auditor-general flagged that the Waterfront Toronto board had only a weekend to review the original project agreement before voting on it, and that the committee assigned to review it did not reach a consensus over supporting the project.

Ms. Davis said that the committee did its due diligence and briefed the board throughout the process, before offering an insight related to criticisms that many project details remain unknown: “The agreement we have today with Sidewalk is the one we should have started with,” she said, referring to the more detailed agreement Waterfront Toronto signed with the New York company in July that replaced its initial deal. “We should have done a different agreement right at the beginning.”

Mr. Angus also noted that the Ontario auditor-general had flagged that the Quayside RFP process was, at six weeks, shorter than other RFPs Waterfront Toronto had done. Mr. Verner said the six weeks only represented the “pre-qualification period,” and that the entire process took 159 days for final bids.

The NDP ethics critic has also long raised concerns of federal Liberal ties to the project, noting that former senior aide John Brodhead, one of the Liberals’ top infrastructure experts, was hired by Sidewalk last year; at the original 2017 announcement, too, Prime Minister Justin Trudeau said he’d been talking about a collaboration with Google “for a few years.” Ms. Davis said she was not involved in any conversations with Mr. Brodhead, who has been invited to come before the ethics committee soon.

Mr. Vaughan, a supporter of the project, also asked about his party’s involvement in the deal.

“Did the federal government bring you Google?" he asked.

“Did anybody in the Prime Minister’s Office bring you Google?”

“No,” the chief development officer said. “We’ve had no contact with the Prime Minister’s Office.” Instead, she said, “a fellow in our office used to work for the City of New York” and he reached out to a previous boss before the formal RFP process was launched. (Dan Doctoroff, Sidewalk’s CEO, was a deputy mayor of New York under Michael Bloomberg.)

Mr. Vaughan also asked Ms. Davis and Ms. Verner for assurances about complying with federal, provincial and municipal laws and rules about privacy and data – to which they agreed without hesitation – and brought up the fact that Toronto would have the final say on numerous issues. On top of other approvals, councillors would have to vote on a “business and implementation plan” for the project to go forward.

“Nothing can happen without city consent?” he asked. Opinion
For economic outcomes of Sidewalk Toronto we need to talk about intellectual property
February 18, 2019 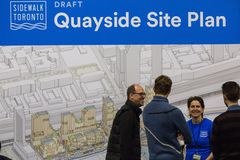