Sean Roosen knows West Africa well. From the late 1980s until the early 2000s, he worked for various gold exploration and development outfits, including spells in Niger, Mali and Burkina Faso. Life was pretty rough. He lived through coups, brushed up against militias, experienced employee kidnappings and had his equipment stolen on multiple occasions.

“These things are all being incubated in abject poverty, in places where there’s no embedded reporter from CNN – or as I call it, life without 911,″ said Mr. Roosen, chief executive of Montreal-based Osisko Gold Royalties Ltd. “I’ve spent a lot of time in places like that. Nobody’s coming, nobody cares and there’s no expectation of justice.”

As dicey as things were back then, the on-the-ground scene in many parts of West Africa has grown much worse.

With gold reserves depleting in many traditional mining jurisdictions, such as Canada and the United States, investment in West Africa has skyrocketed. But along with the reward of mining riches, there is a persistent and growing security risk from jihadi groups intent on causing chaos.

Now, mining companies are taking a hard look at how to guarantee the safety of their workers and investors are questioning the logic of having exposure to West African miners.

In November, 39 people were killed after assailants ambushed a bus convoy carrying hundreds of Montreal-based Semafo Inc.'s employees, contractors and suppliers, who were en route to the Boungou mine in eastern Burkina Faso.

This was the third deadly attack on Semafo in the West African country in the past 15 months. In separate incidents last year, eight people were killed, one involving what the company described as an “armed incident” and the other a shootout between bandits and police.

Semafo had recently strengthened its security protocol to include a military escort for locals travelling by bus, but it’s clear that wasn’t good enough.

“These militants appear to be better trained, better funded and better equipped than the Burkina Faso military, and these attacks are increasing in scope,” Kerry Smith, analyst with Haywood Securities Inc., wrote in a note to clients.

“We believe the likelihood of future attacks on any mining operation in the country is inevitable.”

Semafo isn’t the only Canadian company to have suffered fatalities. In January, Kirk Woodman, a Vancouver geologist who worked for Canadian exploration company Progress Minerals, was abducted from the company’s mining camp in Burkina Faso and shot dead.

No group has claimed responsibility for the attacks on Semafo or the killing of Mr. Woodman, but both are believed to have been carried out by jihadis. Burkina Faso, an extremely poor country in West Africa, has experienced a dramatic rise in jihadi violence over the past few years. About 500 people have been killed as a result of terrorism in the country, and more than half a million forced to flee their homes.

The gold industry in particular has been targeted, with attacks on both artisanal mining sites operated by locals and industrial sites run by corporations based in Western countries.

“When you’re dealing with ISIS and al-Qaeda-style terrorism groups, this is what they’re good at – find the Western moniker and give it a poke in the eye and see if they’ll pull out and sell their assets cheap,” Mr. Roosen said.

Against that heightened risk profile, some money managers believe the best strategy is to have no exposure at all to parts of West Africa.

“It’s just almost untenable to have exposure [to Burkina Faso] in your portfolio,” said Geoff Phipps, portfolio manager with CHS Asset Management Inc. “Particularly if there’s another event. You’d have to explain to your investment officer why you didn’t remove that position.”

Any capital flight out of West Africa will result in money moving into companies that operate in more stable jurisdictions such as Canada, the United States and Australia, said Benoit Gervais, senior vice-president of investment management at Mackenzie Investments. “The appeal of politically safe jurisdictions is rising,” he said.

Large companies whose mine portfolios are heavily weighted toward such safer places include Kirkland Lake Gold Ltd. and Agnico Eagle Mines Ltd.

While Canada, Australia and the U.S. have a long history of industrial gold mining, West Africa’s riches have only been exploited on a large scale in the past few decades. The region is appealing due to its low costs and relatively uncomplicated geology.

Australia’s BHP was one of the first major miners to invested heavily in West Africa in the late 1980s. Canadian miners Iamgold Corp. and Semafo entered the region in the 1990s. Also on the scene by the tail end of the decade was South African upstart Randgold Resources Ltd. run by Mark Bristow, who decades later would become CEO of Barrick Gold Corp.

In 2004, South Africa’s Ashanti Goldfields made a big splash by buying Ghana’s state-controlled AngloGold for US$1.4-billion. In recent years, B2Gold Corp. of Vancouver paid US$550-million for a promising development asset in Mali called Fekola, which has since become one of the world’s most profitable gold mines.

But as investments have grown, so have security risks.

Jihadi activities present “a serious security risk" to the company’s operations and personnel in Burkina Faso and Mali, Toronto-based Iamgold wrote in a regulatory filing earlier this year. The company’s Essakane mine is located in northeastern Burkina Faso, a particularly troubled part of the country. The site is “a visible and valuable target to a terrorist organization due to the presence of a high number of expatriates,” Iamgold wrote.

London-based Endeavour Mining Corp., whose Karma mine is located in the north-central part of Burkina Faso, also listed terrorism and hostage-taking among the risks it faces in West Africa in a filing earlier this year.

In a recent interview, B2Gold CEO Clive Johnson acknowledged that while he has been fielding more calls from shareholders concerned about risk in West Africa, he doesn’t sense any panic from anyone.

“We will be discussing our security practices in Mali and Burkina Faso. But we feel our people are secure. We feel they’ve been secure,” he said.

After the latest Semafo attack, the company shut down its Boungou mine and said it will remain closed until it can guarantee the safety of its staff. Semafo had been flying expats to the mine by helicopter, but it’s unclear whether it has the capacity to do the same for hundreds of local workers. The company had also been looking at building an airstrip at the mine, but it’s not known whether it can fly in its entire staff by plane.

Officials at Semafo declined an interview request for this story.

In the face of rising violence, Osisko’s Mr. Roosen argues what is needed is financial aid from Western governments. Locals in West Africa are in dire need of help with basics, such as food, housing and education – the lack of which he believes is fuelling the rise of terrorism in the country.

“After the Cold War, Western investment in Africa significantly diminished, yet the moral rhetoric about democracy has gone up,” he said. “The West has to decide whether they believe what they say they believe in, or not. If you believe in [environmental, social and corporate governance], women’s rights, children’s rights and basic human rights, you’ve got to stand your ground." 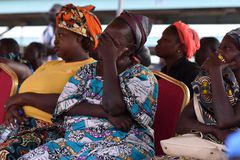