For Allen Lau, it turns out that sometimes the biggest decision in a business can be to stick to your original idea and build on it.

That’s his story, anyway. It’s the story of Wattpad Corp., a Canadian company that started in 2006 as an online reading room and now attracts 70 million users a month to its site and app in more than 50 languages.

“People share their stories, from science fiction to romance to everything in between. Every day we see about half a billion uploads of content,” says Mr. Lau, Wattpad’s co-founder and CEO.

“When we started, there were no iPhones, and even a few years later, when we talked about things like machine learning or artificial intelligence, nobody knew what we were talking about. They’d just give you a blank face.”

Although the company has grown to about 140 employees, Wattpad still does what it set out to do in 2006 – putting stories online for all to see. As the company’s website says, “We’re the global multi-platform entertainment company for stories, proudly based in Canada’s startup capital, Toronto.”

Yet by staying true to its story – remaining as a platform for people to publish their writing – it has been able to expand to other areas of publishing. Wattpad also serves as a literary agent, and earlier this year it launched a book division.

Its technology, which it calls Story DNA, looks at elements such as sentence structure, word use and grammar, comparing it with other writing, whether on Wattpad or in the public domain. Story DNA then looks at data points that indicate where audiences have responded or have been moved by particular writing. This helps to determine which works are more likely to be picked up for studio deals. A human team from Wattpad then also reads promising works to decide whether to publish hard copies.

Wattpad plans to launch its first six printed titles, all young adult books. They’ve been chosen on company research showing that, online, these particular titles together accumulated more than 100 million minutes of reading in 2018.

It may sound as though Wattpad is best suited for literary wannabes, but it’s also drawing attention from bigger literary figures. Margaret Atwood, who judged a poetry contest for Wattpad, wrote in the British newspaper The Guardian, that on the company’s platform:

“… you can post stories about Pod People or affairs with smouldering hunks undead for 2,000 years, which beats ‘My Summer Holiday’ every time. Not only that, you'll have readers who leave encouraging comments on your message board, thus boosting your morale.”

Not all successful tech companies stick to their guns for as long as Wattpad has. Netflix, for example, used to deliver DVDs by mail; Amazon sold books and has pivoted to, well, everything. But while Wattpad’s products and services are expanding, they’re still based on its first premise, that people want to read and write.

When Mr. Lau launched Wattpad, it mostly made available books that were already in the public domain. But it wasn’t easy to see what the business model would be. How could a company profit by posting material online that was already free? 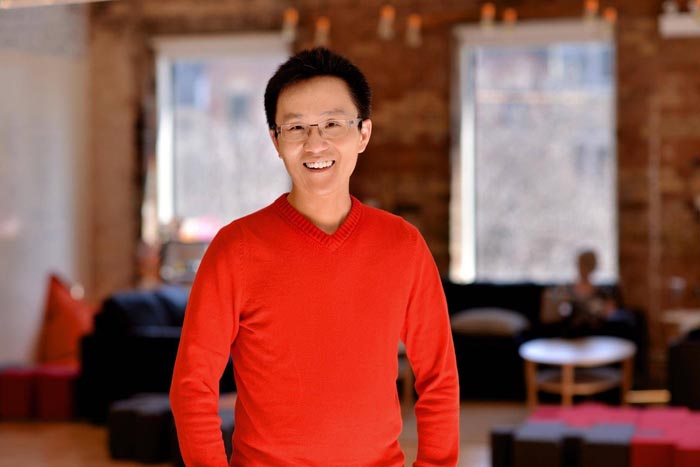 Mr. Lau says the company is winning so far by sticking to its original plan to be a writing and reading platform but deploying machine learning to fine-tune what it offers so more people will use the platform. But being a decision maker isn’t always easy. Here are some of Mr. Lau’s tips:

Watch for change: “You have to realize when there’s a systemic change in an industry. In our company’s time, it has been the advent of mobile devices. Today it’s nothing new, but [when we started] people were just starting to buy mobile devices and share content as well as talk and text each other,” he says.

Take advantage of change: “The sheer amount of content increased exponentially with mobile devices. That led us to look at social behaviour – sharing content on the internet became a norm. People don’t look twice if you share a picture or story now.” That gave Wattpad an opportunity to offer content to share.

Analyze the change: “You need to understand what the systemic change is doing, what the implications are likely to be. This allows you to make decisions differently and invest in certain areas that you might not have considered. For example, we considered the global nature of the internet – it’s unlike anything that humans have invented before. At one point, the most popular story on Wattpad was about India, by a Filipino writer who lives in New Zealand. That never happened before."

Have faith: “We also know that entertainment is going through a period of disruption. So we ask: How will we address this?” The answer for Wattpad is to use machine learning to pinpoint ways to use the massive amounts of data it accumulates. “We know it will pay off, but we don’t necessarily know how,” Mr. Lau says.

Mr. Lau’s long-term insight was that Wattpad’s value was not necessarily based only on the content it offered – the content could change and could be added to.

Wattpad makes money through native advertising – material that appears near writers’ work but is paid for by sponsors. It also takes a cut of any deals secured by contributors if the writing was published first on Wattpad’s site. The company does not publicize its revenues, but says they are “growing nicely.” According to The Economist, last year Wattpad raised US$51-million, putting its valuation at US$400-million.

So the biggest decision for Wattpad was not to expand content, product lines or business services, though it is doing all that, Mr. Lau says. The biggest decision was to stay with its original premise and build on it, by betting on ways to make it easier to do more things with the writing and writers.

That led Wattpad to invest in artificial intelligence. It’s using machine learning to work with what he and co-founder Ivan Yuen consider Wattpad’s greatest asset – its data.

“We collect a few billion data points every day,” he says. “That’s how writers fine-tune. The company’s algorithm goes through the uploads, comments and other bits of data and lets participants look at what is clicking with readers and what falls flat.”

Mr. Lau still believes the biggest value in what Wattpad does comes not from what is on the site, but in the information about who is going to the site. The technology has been building a community.

Wattpad also offers tips and tutorials for writers on how to tailor their work to gain more readers and business interest. “We take the guesswork out of creating,” Mr. Lau says. “We can leverage the data to make it much better.”

The company now also serves as an online literary agent for its writers, taking a percentage from any book or film deal writers achieve. So far, more than 1,000 stories that originated on Wattpad have been published, produced or adapted for TV, film or online content.

One Wattpad-posted book, After, by Anna Todd, was picked up by Simon & Schuster in a reported six-figure deal brokered by Wattpad in 2014. It hit The New York Times bestseller list. It also got 1.5 billion views online.

Another Wattpad entry, The Kissing Booth, by American Beth Reekles, was turned into a Netflix movie last year and a sequel is planned.

“Why isn’t everyone in the traditional publishing value chain – authors, publishers and retailers – scared to death of Wattpad?” asks Bill Rosenblatt, a digital sector analyst and president of GiantSteps Media Technology Strategies in New York.

He identified the company as a disruptor of the literary world several years ago, on the website copyrightandtechnology.com, writing that “much of the writing on Wattpad … directly substitutes for the material that trade publishers sell."

“Wattpad started out as a platform for writers to critique each others’ work, which sounds innocuous (and useful) enough, but it’s clearly moved on to become a place where the readers vastly outnumber the writers,” Mr. Rosenblatt says.

Mr. Lau says, “We realized we really needed to be good about using data. It was a brave decision on our part.”

Editor’s note: Bill Rosenblatt's website is called copyrightandtechnology.com. A previous version of this story had the incorrect name, but correct link. This is the corrected version.