As co-founder and CEO of a fast-growing artificial intelligence (AI) firm, Kerry Liu has to keep his head in the clouds, digitally speaking.

But which clouds? It was a tough, costly and potentially risky decision for Mr. Liu, his partners and their Toronto-based company Rubikloud Technologies Inc.

“We started in 2013 with three guys and a puppy named Charlie, on a beige couch in a very small apartment,” Mr. Liu says.

That was before they raised $45-million in venture financing. Mr. Liu’s firm has created a machine-learning platform to help retailers automate their day-to-day processes, such as inventory, marketing and customer service.

“We’re working in an industry where the ground is shifting virtually monthly,” he says.

With machine learning, an offshoot of artificial intelligence, computers can process huge amounts of data and make complicated decisions without humans prompting them.

Mr. Liu says that, among other things, Rubikloud’s machine learning platform can help retailers decide how much of any item to stock, when to have sales, how to avoid running out of popular items and how to manage loyalty programs.

Never mind the ground shifting, though. In order to work properly, Rubikloud’s platform needs to be in the cloud.

The computer cloud is the only place big enough to store and deploy the gajillion terabytes of data that machine learning requires.

The big decision Mr. Liu and Rubikloud faced was to determine which of the major cloud vendors his company should use for storage. He had to choose from the big three: Amazon Web Services, Microsoft and Google.

Choosing one over the others can lock you into that firm’s system, maybe forever. Think of the tech commitment for an individual trying to decide between an iPhone or a Samsung Galaxy and, well, multiply that by terabytes and millions of dollars.

“It was a big decision for us. It wasn’t easy and it wasn’t popular within the company at first,” Mr. Liu says.

“It required way more money and resources than perhaps we should have spent at the time.” But it has led to long-term benefits for the business and helped it to grow faster, he says.

There are several advantages to being “cloud agnostic,” as Mr. Liu describes his decision.

“First, it means we can be flexible based on the client’s needs. We have clients who say they work with Microsoft or Google, for example, or have an existing relationship with one of the three. Now it doesn’t matter to us,” Mr. Liu explains.

Secondly, going with three vendors instead of one lets Rubikloud think big.

“It allows us to be global. There are a lot of new regulations in different countries which say that particular data must stay in that country. Germany, France, the United Kingdom and some Asia-Pacific countries are quite clear on this,” Mr. Liu says.

The European Union, among other jurisdictions, has done battle with Google over the privacy of data in its cloud, for example. Using three companies enables Rubikloud to work with any cloud vendor that has worked out its issues with particular regulators and courts.

“Having the ability to deploy on any cloud means we have been able to scale our company to serve nine countries,” he says.

It’s true that signing with three cloud vendors means Rubikloud potentially faces three times the cost that competitors who sign with only one experience. But it has proven to be the right decision, Mr. Liu says.

“Others fall into a trap where they become pretty dependent on just one vendor. Initially it did cost us more, but now it’s actually much, much cheaper.”

“Anyone who has ever started a business will tell you that a decision like this always involves compromise,” says Roy Kao, senior advisor for finance and commerce at Toronto’s MaRS Discovery District.

“There are very few instances where there will be sufficient capital for founders to make all of the very best decisions for a business every time. Often they have to pick and choose to get the right tech and the right business model,” he says.

“It’s not common what Kerry and Rubikloud did, signing with all three platforms. It’s a risk. But is it a good idea? Yes. You have to cover all your bases,” Mr. Kao adds.

He likens Mr. Liu’s decision to the tech challenges businesses have faced in the past, working with rival smartphone systems or web browsers, which come and go.

Data “residency” is also important in AI and other Information Age businesses, Mr. Kao says. Customers want to make sure the data they store with Rubikloud is available even if one of the cloud providers becomes less popular or is blocked in some countries.

“Having multi-cloud platforms helps you avoid the pitfalls of dealing with different jurisdictions. It gives Rubikloud the ability to talk with large multinational customers and gives them the highest probability for success,” Mr. Kao says.

It’s a challenge for companies like Rubikloud not just to find the money to contract with three cloud providers, but also to find the tech talent to make sure all three work.

“But the world has changed. You can’t just pick a single database,” Mr. Liu says.

For now, as machine learning marches forward, the only one-of-a-kind presence at Rubikloud is Charlie the dog. 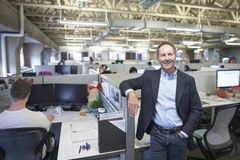