Prior to the pandemic, hedge funds looking for takeover plays in the financial sector had a novel tactic: Track the flights of corporate jets owned by Canada’s big banks.

The fund managers knew that four domestic banks were potential buyers of regional U.S. banks. The hedge fund crowd figured if executives at Bank of Montreal, for example, were taking a Learjet to Houston, or Toronto-Dominion Bank brass were boarding a Challenger to Atlanta, they should buy shares in banks based in those regions, then wait for a deal to be announced.

Corporate travel and bank takeovers came to a halt last March, as everyone shifted their focus to surviving a global health crisis.

Now it may be time to start tracking flights again.

On Monday, Pittsburgh-based PNC Financial Services Group Inc. signalled the strongest players in a fragmented U.S. banking industry are looking past the pandemic and once again snapping up smaller rivals. PNC announced a friendly, US$11.6-billion takeover of BBVA USA Bancshares Inc., the American arm of a Spanish-based bank. The deal is all about building scale. PNC picks up 637 branches in seven states, including Texas and California, and vaults into the ranks of the top five U.S. retail banks.

TD, BMO, Canadian Imperial Bank of Commerce and Royal Bank of Canada all have U.S. growth strategies based in part on acquiring regional players and building larger customer networks. TD is hunting along the East Coast, BMO and CIBC are both targeting the Southwest and Midwest, and RBC wants to build on the wealth management platform it acquired five years ago at California-based City National Corp. Prior to the pandemic, CEOs at all four domestic banks said they want to scale up, at the right price.

“Consolidation is a constant in the U.S. banking industry, however, the pace of transactions ebbs and flows,” said Robert Wessel, co-founder and managing partner of Hamilton ETFs, an asset manager that focuses on financial services stocks. He said when U.S. boards are open to selling, and the numbers work, Canadians are bound to be among the bidders when a U.S. platform is on the auction block.

Right now, the numbers do work for Canadian takeovers of U.S. banks. One common metric for valuing bank takeovers is the price of the offer as a percentage of the institution’s tangible book value. PNC is buying BBVA’s operations for 134 per cent of their book value, a relatively low takeover premium by historical standards.

In contrast, shares in Canada’s six big banks currently trade for an average of 161 per cent of their book value. That means a domestic bank can raise money by selling stock at a relatively strong valuation, then turn around and buy a U.S. platform for a lower value.

However, Canadians face a significant handicap when bidding for U.S. banks. Unless they can acquire networks adjacent to their existing U.S. operations, it’s difficult to cut costs and realize the synergies that quickly boost profits.

PNC, on the other hand, is buying branches that fit neatly into its existing system. PNC said it can squeeze US$900-million in annual costs from BBVA’s operations, which will boost PNC’s forecast earnings in 2022 by an impressive 21 per cent. Cutting costs is one of the few ways banks can boost profits when interest rates are low, shrinking the margin between what banks pay on deposits and earn from loans.

To date, Canadian banks have targeted southbound takeovers in the US$1-billion to US$5-billion range, to limit the short-term earnings hit. Smaller deals are also easier to justify to regulators, who have become more stringent on capital levels during the pandemic. The next round of takeovers will likely be in the same range, according to Hamilton ETF’s Mr. Wessel. He said: “The odds of a Canadian bank doing a US$10-billion-plus takeover aren’t zero, but they are low.”

For the right, bite-sized U.S. acquisitions, executives at Canadian banks may once again be taking to the air. 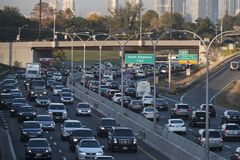