Derek Barrett’s trip home to St. John’s from Fort McMurray used to take nine hours and two flights. It now takes at least 30 hours and four flights. A cancelled flight or a snowstorm can easily add another 15 hours to the journey, which Mr. Barrett makes twice a month to and from his job as a mechanic supervisor in the oil sands.

Canada’s airlines have suspended routes to several cities, cancelled thousands of flights and – in some cases – ceased flying altogether in response to the COVID-19 pandemic and government travel restrictions intended to save lives. Thousands of people who work for the airlines, airports and the companies that serve them are laid off. This means Mr. Barrett and others who rely on air travel to get to work face a tough truth: You can’t get there from here.

Before COVID-19, Mr. Barrett flew to Fort McMurray via Toronto and St. John’s. These days, the same trip includes switching planes and waiting for connecting flights at airports in between – Halifax, Montreal and Calgary, sometimes overnight.

He has fewer flights to choose from, more connections and much longer waits between legs. Cancellations are more likely as airlines combine sparsely sold flights, and it may be hours before the next plane takes off.

Then and now: Two weeks

THE GLOBE AND MAIL, SOURCE: CIRIUM

Then and now: Two weeks of Atlantic air travel

THE GLOBE AND MAIL, SOURCE:CIRIUM 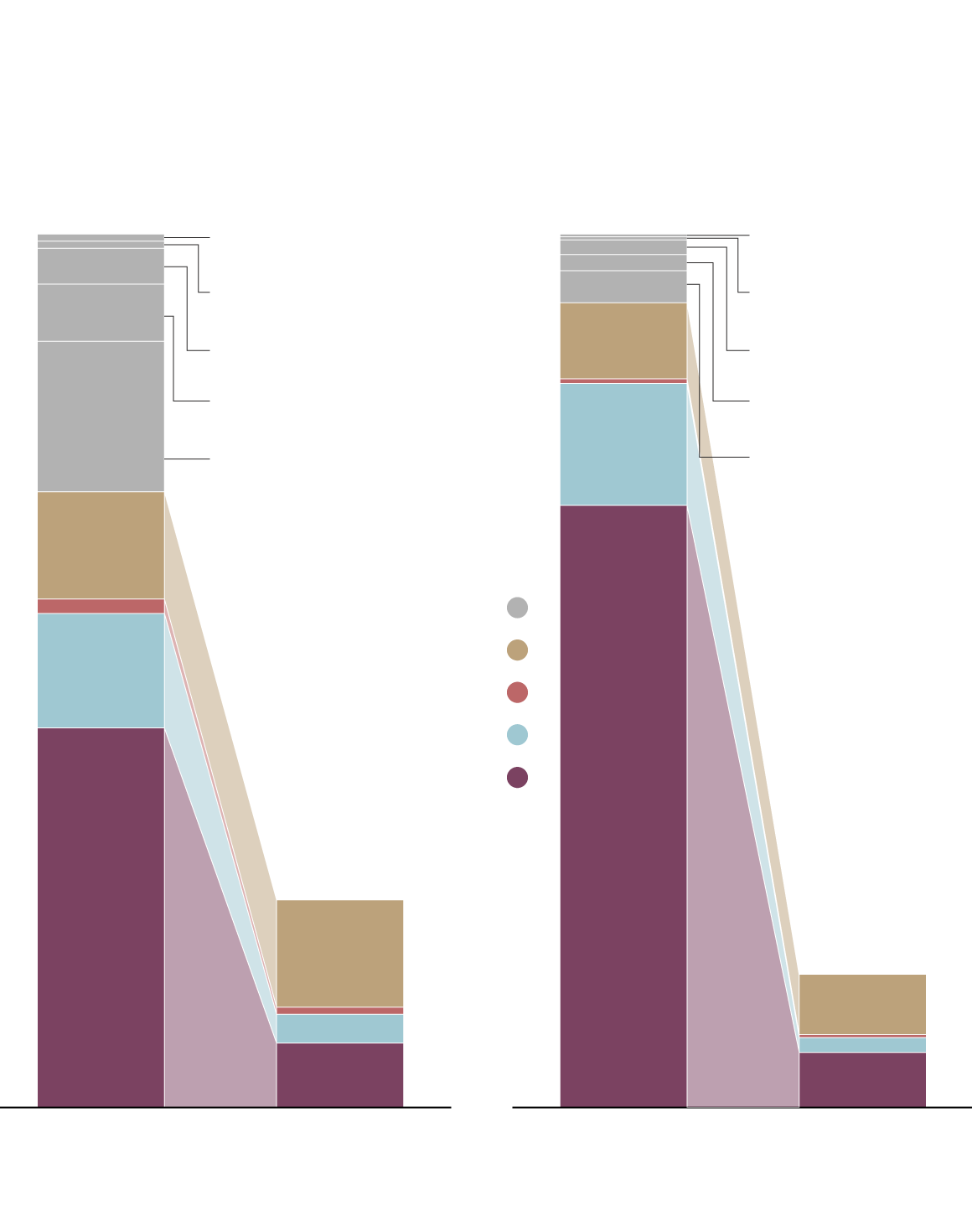 Then and now: Two weeks of Atlantic air travel

THE GLOBE AND MAIL, SOURCE: CIRIUM

Rotational work – two weeks away on the job then two weeks at home – is never easy on employees and their families. The pandemic made it harder.

Canada’s two largest airlines are in survival mode, operating at about 10 per cent to 20 per cent of their usual capacity, laying off thousands of flight crews and ticket agents, and parking and retiring planes. Air Canada AC-T has suspended all flights to 25 of its 60 domestic airports, including Prince Rupert, B.C., Fredericton, N.B., and Yellowknife. Many cities and towns, including Sydney, N.S., are left with no commercial airline service. WestJet has suspended flights to Moncton, N.B., Quebec City and other places, leaving Halifax as its lone destination in Atlantic Canada.

Porter Airlines, Sunwing Airlines and Air Transat have temporarily suspended service and laid off most of their employees.

The loss of regional routes are at the heart of discussions the federal government is holding with airlines seeking financial aid.

The government has said repeatedly any taxpayer-funded assistance given to the airlines will come with conditions that include retaining staff, reinstating regional routes and refunds for cancelled flights. But it is not clear how Ottawa will ensure regional service is restored, and the government won’t say. Even so, most of the suspended routes are back on the airlines’ summer schedules.

“In a country as vast as Canada, it’s essential we maintain connections between people and our communities,” said Katherine Cuplinskas, a spokeswoman for Finance Minister Chrystia Freeland, who was unavailable for an interview.

Isabelle Dostaler, business dean at Memorial University in St. John’s, said the loss of airline connections in Atlantic Canada and other regions compounds economic problems at the worst possible time.

Prof. Dostaler is a Montrealer who moved to St. John’s four years ago. Before the pandemic, she flew to Montreal regularly to visit her grandchildren and had a choice of at least three daily, direct flights. Now there is one.

“For secondary airports, it’s a terrible blow,” she said of the loss of commercial airline service. “There are some airports where nothing is happening. The worry is, will it ever go back to what it was?”

From his office window at JA Douglas McCurdy Sydney Airport on Cape Breton Island, the facility’s chief executive officer, Mike MacKinnon, can see both runways, the parking lot used by employees and a car rental agency. “Normally I would see about 100 cars,” Mr. MacKinnon said. “Right now there are two cars out there – my car and the commissionaire’s, who’s downstairs today.”

Employment at the airport has fallen to fewer than 30 jobs, compared with 140 before the pandemic. The runways sit mostly unused, and some days see more snowplows than planes. In a typical summer, about 10 flights land at the airport daily. These days, it’s just the medical evacuation helicopter, the mail plane and sometimes a search-and-rescue aircraft. “Other than that, it’s very quiet,” Mr. MacKinnon said.

Over the past year, governments told people to stop travelling, and then made it harder to travel. Closed borders, hotel quarantines, COVID-19 tests before boarding and on arrival helped cut demand for air travel by up to 90 per cent.

Airlines, airports and unions that represent aviation workers say Ottawa needs to provide aid to ensure Canada has a viable travel industry on which to rebuild its economy when the pandemic recedes.

Air Canada declined to comment for this story and pointed to remarks by then-CEO Calin Rovinescu in February. In a conference call with analysts, Mr. Rovinescu said he was “confident” talks with the government for industry support yield “an agreement on refunds, an understanding on regional routes and return to ... some of the regional markets as well as some form of support for the aerospace sector.”

Morgan Bell, a WestJet spokeswoman, said the carrier is seeking a national strategy to safely resume travel as vaccination rates rise. “We are not seeking policies that strictly support our bottom line and do not believe that is what the nation needs,” Ms. Bell said.

Mr. MacKinnon and others who run Canada’s airports are also in talks with the federal government about financial aid. The airports are non-profit and run on the fees charged to airlines, on-site restaurants and other tenants. Some airports have relied on lenders to keep the lights on. In Sydney, the airport is using its capital reserves.

“We’re like a small town,” Mr. MacKinnon said. “We have our own waste treatment and water treatment plant. We have kilometres of roads around here that have to be plowed and maintained on ground side. And then, of course, you have your runway. So it’s not cheap to run an airport all and meet the regulatory standards that you have to maintain.”

The pandemic has already claimed thousands of aviation jobs and one mid-sized airline. Sky Regional Airlines, which flew on behalf of Air Canada to small cities that have lost service and employed about 800 people before the pandemic, is shutting down at the end of March. About 280 Sky Regional pilots – 160 of whom are on layoff – will transfer to Jazz Aviation, another Air Canada contractor, owned by Chorus Aviation. Jazz has already laid off 575 pilots and has 680 on active duty.

Claude Buraglia, chairman of the Jazz chapter at the Air Line Pilots Association, said the laid-off pilots have been unable to keep up their minimum training and are unable to work.

Until vaccines become widespread, the aviation industry says a universally recognized system of passenger testing will allow travel to resume safely. Visiting family and friends – key to regional airports – will be first to resume, followed by holiday and business travel.

Mr. Buraglia, like others, cannot predict when the planes, passengers and jobs will return to the skies. But he’s sure of one thing: The next few years will be better than the last. “I’m optimistic,” he said. “I don’t see how it can be as bad as 2020.”