Peter Nygard, a Winnipeg fashion magnate who for years enjoyed a life in paradise at his luxury home in the Bahamas, faces arrest if he returns to the country.

It is the latest episode in a long fight between Mr. Nygard and New York hedge-fund billionaire Louis Bacon. The two men are neighbours in the exclusive neighbourhood of Lyford Cay in the Bahamas. Save the Bays, a non-profit organization in part backed by Mr. Bacon, has accused Mr. Nygard of dredging the seafloor around his home to enlarge his property. The two men are faced off against each other in a New York court in a continuing US$100-million lawsuit. In the Bahamas, the dredging case has wended through court, and numerous decisions, for much of this decade.

In the dredging case, Mr. Nygard is dealing with previous contempt of court rulings, which led to the bench order for his arrest.

But Mr. Nygard, who turns 78 this summer, is ailing and back home in Winnipeg. According to an affidavit filed in court on Monday morning, Bahamian doctor Lynwood Brown said a flight could be fatal to Mr. Nygard. Winnipeg doctor Harvey Lee is overseeing his care.

“He is not able to fly and leave Winnipeg until further notice,” wrote Dr. Lee in a note dated Jan. 27 and included in the affidavit.

Jay Prober, one of Mr. Nygard’s lawyers in Winnipeg, said his client offered to appear in court by video conference.

The arrest warrant, said Mr. Prober, “is grossly unfair and totally unnecessary. There’s no basis for it.”

Various legal responses are in the works, including an appeal of the arrest warrant and an attempt to challenge the presiding justice’s jurisdiction in the case.

Fred Smith, lawyer for Save the Bays, noted Mr. Nygard had been travelling this month and was skeptical that he wasn’t able to appear at court dates earlier this month.

“The court just lost patience with him failing to appear. Mr. Nygard seems to think he’s above the law,” Mr. Smith said.

Mr. Smith was also skeptical that an affidavit declaring medical distress appeared only on Monday morning.

“This was simply obstruction and delay and was merely a repeat performance of what has been going on for years,” Mr. Smith said.

According to the affidavit, however, Mr. Nygard’s health has worsened considerably in recent days.

He sought medical treatment in New York from Jan. 14 to Jan. 21. He had severe pain in his knee and shoulder and received 84 regenokine injections. They were not successful. During the same week, Mr. Nygard met with a cardiologist to do a stress test, but there was a problem with the machine and Mr. Nygard’s pacemaker also malfunctioned. Mr. Nygard arrived back in Winnipeg on Jan. 25. He was dizzy and faint as he got off the plane and feared falling.

“He felt very anxious as he thought he was having a stroke,” according to the affidavit.

He went to the emergency department – pictures were included – at Winnipeg’s St. Boniface Hospital. His pacemaker was fixed and he cut back his intake of human-growth hormone peptides.

Dr. Brown, who swore to the affidavit on Jan. 28, said he believed that if Mr. Nygard flew at higher than 30,000 feet to get to the Bahamas, it “could be fatal.” The affidavit also included a note from St. Boniface emergency-room doctor Kristjan Thompson, who also said Mr. Nygard could not travel until cleared by his cardiologist or doctor.

The arrest warrant in the Bahamas is the latest legal blow for Mr. Nygard and follows a difficult episode last fall when Bahamian officials seized his home. Mr. Nygard later paid about $3-million to Save the Bays for legal costs; money that is currently being held in trust.

The fight between Mr. Nygard and Mr. Bacon started about a decade ago, over parking and noise. Their homes share an access road and Mr. Nygard liked to throw big parties. While the dredging case landed in court in the Bahamas, Mr. Bacon in 2015 filed a defamation lawsuit against Mr. Nygard in New York State’s Supreme Court.

The suit was tossed out in 2016, but revived last year and is moving forward.

On March 26, lawyers’ oral arguments are scheduled in court on the question of Mr. Nygard’s team seeking to dismiss most of the lawsuit.

Mr. Nygard’s legal team has described the saga as a “modern-day Hatfields and McCoys.” 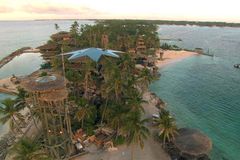