In the dry language of actuaries, the islands of the Bahamas are experiencing what’s known as an insurance gap.

After being devastated by Hurricane Dorian earlier this month, the island nation faces an estimated US$32-billion in cleanup costs. Insurance companies are expected to pay just US$5-billion of the bill, according to RBC Capital Markets Inc. That leaves an insurance gap -- the difference between cost of damage and what insurers will cover - at 85 per cent of the capital required to rebuild the Bahamas.

There’s untold human suffering behind that gap, as home owners, businesses and governments struggle to find the money for repairs and to restore communities. The insurance industry, on the other hand, sailed through the storm. Share prices held steady in recent weeks at property and casualty (P&C) and reinsurance companies that cover catastrophic events such as hurricanes, including Canadian players such as Intact Financial Corp. and Fairfax Financial Holdings Ltd.

What just played out in the Bahamas is an extreme example of how insurers are deftly avoiding some of the risks that come with increasingly violent storms, wildfires and other manifestations of climate change. “Underwriters are wise to the potential for complete property losses on low-lying islands in a peak hurricane zone,” said analyst Mark Dwelle at RBC Capital Markets. In a report, he said the high cost of insurance in the Bahamas excludes most potential customers, and companies will not even consider insuring poorly built homes and business facilities.

Consumers and governments need to wake up to the implications of an insurance industry that’s pulling back from policies it traditionally offered. As those who live in flood-prone areas of New Brunswick, Ontario and Quebec have found out in recent years, a dream home beside a lake, river or forest that was cheap to insure against flood and fire in the past will be more expensive, or simply impossible, to protect in the future.

For Canadian insurers, the cost of disaster damage has been doubling every five to seven years since the 1960s, according to data complied by the Institute for Catastrophic Loss Reduction, which is affiliated with Western University. Before 2010, statistics from the Insurance Bureau of Canada show only one year when catastrophic losses in Canada totaled more than $1-billion. That was 2005, when tornadoes tore through southern Ontario in early August.

Since 2010, catastrophic losses exceeded $1-billion in every year but one, including $5.1-billion of claims in 2016, the year of the wildfires in Fort McMurray, Alta. The cost of cleaning up after Hurricane Dorian in Nova Scotia and Newfoundland will qualify as another catastrophic loss, with claims likely to be well over $25-million, according to Toronto-based consulting firm Catastrophe Indices and Quantification Inc.

At Canada’s largest P&C insurer, Intact Financial, the majority of home insurance claims used to be for fire damage. That began to change a decade back, as the insurer began paying out ever-increasing amounts to settle claims for extreme weather events, such as floods in Alberta. Last year, water damage accounted for 40 per cent of Intact’s Canadian property claims, and home insurance was the Toronto-based company’s fastest-growing line of business. That’s prompted a shift in the company’s strategy.

“We saw the canary in the coal mine 10 years ago and we’ve been helping our customers manage the direct effects of increased flooding, fire and other extreme weather events ever since,” Charles Brindamour, Intact’s chief executive officer, said in a speech at the company’s annual meeting in May. “We are working with other global insurers, governments and non-government organizations on climate change.”

Intact’s strategic shift in the face of climate change includes philanthropy. In the past four years, the company donated more than $6-million to causes that include the Intact Centre for Climate Adaptation at the University of Waterloo. The company is also lobbying government. Mr. Brindamour met with the Prime Minister earlier this year to make the case for natural assets as critical infrastructure, explaining that protecting wetlands can mitigate flood damage by up to 40 per cent. Intact and several other insurers made consumer education a priority, launching campaigns that show homeowners how to waterproof their basements.

Intact, a top performer on the Toronto Stock Exchange over the past decade, is also constantly refining its approach to property insurance by adjusting the price of its policies to match the rising costs of claims, and exiting areas it deems too risky. In a recent investor presentation, Mr. Brindamour highlighted the fact that Intact expects to post industry-leading profit margins on home insurance “even with severe weather.”

The insurance industry is prepping to stay profitable in the face of more category-five hurricanes. For consumers, that will mean higher prices for home policies, or dealing with a growing gap between what their insurance covers and the cost of storm damage.

Cleanup of Dorian damage in PEI national park will continue into 2020
September 13, 2019 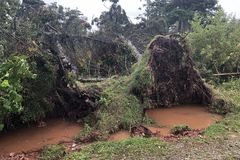 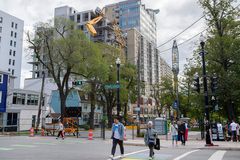 Remains of Ontario woman who died during Hurricane Dorian to return from the Bahamas: mother
September 13, 2019 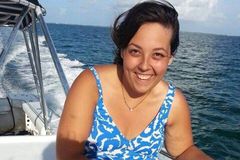