The women’s hockey program at University of Guelph changed forever last St. Patrick’s Day, when Kaitlin Lowy scored the only goal of the game to clinch the USports national championship with a 1-0 win over McGill University.

While Guelph’s Gryphons has been one of the more successful teams in Canadian women’s university hockey over the past few seasons, achieving a No. 1 ranking for the first time in 2015, the team could never manage to hoist the ultimate trophy.

To assist in the quest for that elusive title, head coach Rachel Flanagan and athletic director Scott McRoberts turned to a people management platform to measure the intrinsic motivation of employees, or in this case, players.

They entered into a 140-day contract with Beaconforce. The San Francisco-based company has combined artificial intelligence and behavioural science to create a smartphone application which asks employees two customizable questions each morning and builds up a profile of their motivation over time. 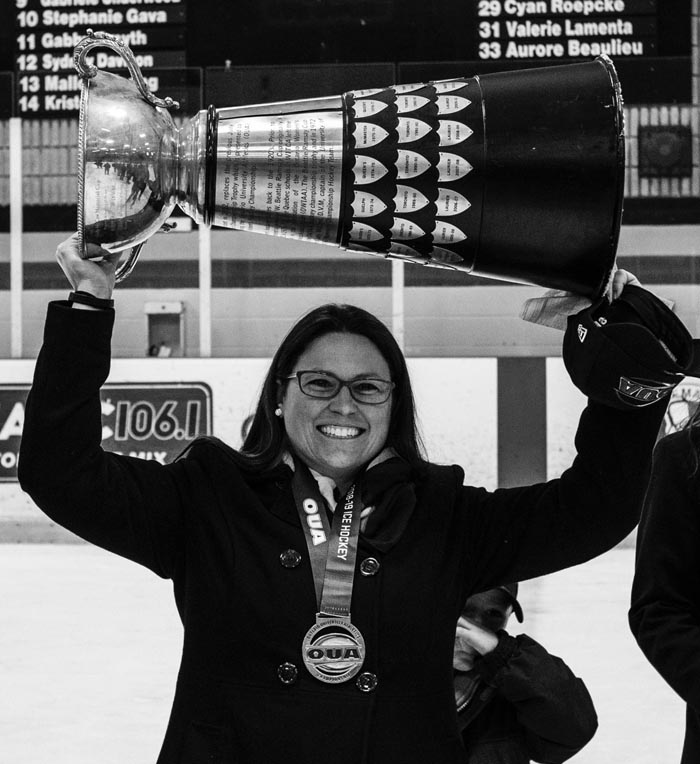 As a women’s university hockey coach, Ms. Flanagan makes decisions large and small all season. But a new app has allowed her whole roster to communicate better and set goals.

Small touches: “[The Beaconforce] app emphasized the importance of the small touches for athletes, both mentally and verbally. Having the app [allowed them] to focus in on hockey for a few minutes off the ice.”

Conversation starter: "Having it as a conversation starter was hugely important for us. I think it taught us as coaches a little bit more [our players]. You can ask the team openly what do you guys need from us, but unless they’re writing it down silently and anonymously you can never really get a great answer and people need different things, so it’s individualized what players needed from us.

Managing risk: “It helped us understand how much players, especially on the sports side, how risk averse athletes can be, especially depending on their position in the lineup. . . . it was interesting to see the risk-averse athletes compared to athletes who have a little bit more confidence to make a mistake. It’s a bit of a vicious circle so it opened a lot of conversations around making mistakes in practice and being allowed to make mistakes.”

Self-awareness: “The experience for the athletes, being able to go away having learned a little bit more about themselves, I think was a very big takeaway for us. The reason we took on the app was we wanted to improve our performance, but we also wanted to give them an opportunity to learn about themselves.”

While it’s designed for businesses, the company had recently launched a sports division, and the Guelph Gryphons were only too happy to see whether the app could provide the missing piece to their championship puzzle.

“Do I think we could have won [the championship] without it? Sure,” Ms. Flanagan says. “Do I think we got better performance out of players because of it? Yes. So that’s what makes me think that maybe we wouldn’t have won without it.”

Coming off her first title in her 12th year behind the Guelph bench, the Gryphons head coach explains that in the past she may have presided over more talented teams, but that she couldn’t necessarily get her players to perform when they needed to.

With players juggling the demands of midterm exams, family and social commitments, in addition to hockey, that was hardly surprising. But through the use of algorithms and its customizable, anonymous questions, asking things such as, “How often do you get angry during training/games?” or, “After making a mistake, do you get good feedback and support?” the coaching staff was able to better understand its roster of 25 players.

“It was a much more strategic way for us to know what was going on with our players, or at least have an idea to be able to open some conversations with them,” she says.

The app was also able to bring the players’ minds back to hockey, even when they weren’t at the rink. The 30 seconds or so that it would take to answer the two questions that were generated each morning allowed them a small window to think about their commitment to their coaches and teammates.

“It opens the door for a lot of conversations that you don’t necessarily have with your coaches,” says Miranda Lantz, a forward on the team. “They can pull you into the office and say, ‘I’ve noticed your scores were a little weird today. How’s it going? How is school going?’ and it’s not all hockey focused.”

While winning the championship was clearly a tangible reward for taking the time to implement the Beaconforce app, experts say that it’s something that any forward-thinking organization should be looking at.

Bruce Sandy, principal at Pathfinder Coaching and Consulting in Vancouver, says that whether it’s in life or relationships or work, people are motivated by different things and for any leader, it’s worth finding out what those things are.

By finding those out, he says it is possible to offer constructive feedback and recognize the value and work that people bring to an organization.

“You have to constantly look at these things and the more you can acknowledge and recognize people, the more motivated, the more engaged they’ll be, so there has to be a conscious intention around it,” he says.

One advantage apps such as the one by Beaconforce have over traditional desktop computer surveys and the like is that it is updated on a daily basis, and not once every three, six or 12 months. It allows employees to address concerns that may have cropped up in the past 24 hours, says Julie Labrie, the president of Toronto’s BlueSky Personnel Solutions.

“Maybe by doing this on a daily basis, you can probably gauge [things] better because when you do an employee survey, very often if you have something that bothered you six months ago, you may not remember it unless it was really painful,” she says.

As an employer herself, as well as a recruiter, Ms. Labrie says that it’s important for employees to share any concerns and if they are fixable, then she will try and fix them. The alternative is not an avenue that any company should want to go down.

“You know when an employee is disengaged, their performance drops drastically,” she says. “You can see it, they don’t care any more and when you start to not care any more then everything else starts. People are dropping the ball and then you see mistakes happening over and over again.”