Surging world oil prices are boosting the fortunes of Canadian producers, but companies remain hampered by insufficient access to markets and a price structure that discourages the use of rail for exports.

Since the start of the year global oil prices have soared, with the international benchmark, Brent crude, climbing 35 per cent and West Texas Intermediate (WTI) rising 40 per cent. On Wednesday, WTI crude, which is the North American benchmark, eased back to US$65.89 after hitting its highest level since last October on Tuesday.

Analysts point to geopolitical tensions for the steep climb, as U.S. President Donald Trump threatens to crack down further on Iranian oil exports, while OPEC (Organization of the Petroleum Exporting Countries) producers Venezuela and Libya face internal turmoil that is driving down production.

“There are a lot of pockets of instability – Venezuela and Libya being the hot spots now,” said Kevin Birn, Calgary-based vice-president of IHS Markit Ltd., a global market-intelligence firm. Mr. Birn said Saudi Arabia will have to ratchet up production to replace the Iranian, Venezuelan and Libyan supply disruptions. However, as the Saudis boost output, the country’s space capacity will be reduced, and traders tend to react to a tightening of global spare capacity by keeping prices high, he said.

Saudi Arabia and Russia led an agreement last fall of OPEC and major non-OPEC producers to cut production by 1.2 million barrels a day, a deal set to expire in June.

Canadian producers are benefiting from a trifecta of factors working in their favour: the increase in global prices, the lower discount they must accept for their heavy crude and the fact the Canadian dollar has not risen in tandem with higher oil prices, as is typically the case. A higher loonie erodes the impact of higher crude prices because oil is priced in U.S. dollars while costs are in Canadian currency.

At current levels, the country’s largest oil producers could generate surplus cash flow of $17-billion in 2019, according to new calculations by analyst Randy Ollenberger at BMO Nesbitt Burns.

Suncor Energy Inc. estimates that it gains US$240-million in free cash flow for every US$1 gain in Brent prices, assuming differentials hold steady. (Brent has gained almost US$20 a barrel since Jan. 1.) Cenovus Energy Inc. reported last Thursday that it earned $731-million (Canadian) in free cash flow in the first quarter as Canadian prices began to climb, after being $565-million in the red in the previous quarter.

“At current commodity price levels, I’m confident we are well-positioned to continue to generate significant free funds flow and make significant progress towards our debt-reduction target over the course of 2019 and beyond,” Cenovus chief executive Alex Pourbaix told analysts on a conference call.

However, Alberta producers can’t take full advantage of the price increases because they continue to operate under production cuts imposed by the provincial government and because the economics of shipping crude by rail to the U.S. market have worsened since it came into effect.

The production curtailment boosted Canadian prices as the discount between WTI and Western Canadian Select has narrowed to roughly US$10 a barrel from more than US$40 last fall. However, producers are reluctant to ship crude by rail because the price spread is not enough to cover the higher transportation costs. As a result, exports of crude by rail fell in February to an average of 130,564 barrels a day, the National Energy Board said Wednesday. That’s down 60 per cent from January.

Still, Canadian oil exports to the United States remain at near-record levels. Imports from Canada averaged a record 4.6 million barrels a day in January, the U.S. Energy Information Administration said in its latest data, although that figure likely fell in February with the decline in rail shipments.

In a research note, CIBC analysts stress that Canadian crude still faces structural problems. “Canadian differentials will widen from current levels and we don’t believe the market should be complacent about this weighing on sentiment,” the analysts wrote. They expect the discount to more than double to an average of about US$25 a barrel by the third quarter of 2020.

Even if prices fall back and the differential widens, BMO’s Mr. Ollenberger believes the largest oil producers will make money. If WTI hovers around US$55 per barrel and WCS’s discount to this crude sits at US$20 a barrel, major oil producers will still generate $11-billion in surplus cash flow in 2019. 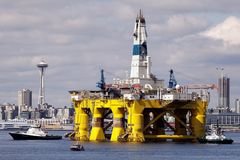 Opinion
If Jason Kenney won’t lead on climate, investors and industry should
April 24, 2019 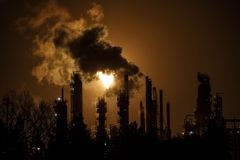 Follow Shawn McCarthy and Tim Kiladze on Twitter @smccarthy55 @timkiladze
Report an error Editorial code of conduct
Due to technical reasons, we have temporarily removed commenting from our articles. We hope to have this fixed soon. Thank you for your patience. If you are looking to give feedback on our new site, please send it along to feedback@globeandmail.com. If you want to write a letter to the editor, please forward to letters@globeandmail.com.
Comments