Swiss-based Zurich Insurance Group Ltd. is blacklisting oil sands producers as well as the pipeline companies and crude-by-rail facilities that serve them, saying Tuesday that it will stop underwriting or investing in the companies within two years unless they can clearly show their business plans are consistent with a global effort to avert the worst impact of climate change.

Zurich said it is joining a United Nations compact to align its own business operations with the goal of limiting average global temperature increases to 1.5 degrees Celsius above pre-industrial levels in order to avoid catastrophic impacts of climate change. In a report last fall, the UN’s Intergovernmental Panel on Climate Change said the 1.5-degree target is necessary to avert dire human impacts and the wholesale extinction of vulnerable species.

Zurich committed to using only renewable power in all global operations by 2023, and said it will work to create financial industry standards to measure and set targets for the carbon footprint of companies’ underwriting and investment portfolio.

“As one of the world’s leading insurers, we see first-hand the devastation natural disasters inflict on people and communities,” Zurich chief executive officer Mario Greco said in a release. “This is why we are accelerating action to reduce climate risks by driving changes in how companies and people behave and [to] support those most impacted.”

The Swiss insurer has US$190-billion in investments worldwide, and is the latest institutional money manager to target the oil sands for divestment. Others include British bank HSBC Holdings PLC; France’s BNP Paribas SA and France’s giant AXA Equitable Financial Service LLC, as well as several state pension funds in the U.S. Alberta Premier Jason Kenney publicly condemned HSBC for its stand, but recently dismissed the financial industry’s increasing focus on climate risk as the “flavour of the day.”

However, an expert panel appointed by the federal government recently warned that the pressure will only increase as global financial markets respond to the growing climate emergency. The panel – headed by former Bank of Canada deputy governor Tiff Macklem – said Canada’s oil companies must scale up the pace of innovation in order to reduce their carbon footprint or see their share of the global market decline precipitously.

Companies such as Imperial Oil Ltd., Suncor Energy Inc. and Canadian Natural Resources Ltd. argue they have made great strides in reducing the greenhouse-gas intensity of their new facilities, which they say are now on par with the average crude refined in North America. Over all, the industry has reduced its per-barrel emissions by 29 per cent since 2000, the Macklem panel said.

“Canadian oil and natural gas is produced in one of the most highly regulated jurisdictions globally and is among the most sustainably produced energy sources in the world. The majority of global oil and natural gas reserves are held by nationally-owned companies accountable to little, or no climate legislation,” Jon Stringham, manager of fiscal and economic policy at the Canadian Association of Petroleum Producers, said in an e-mail.

Constraining Canadian production will only result in increased market share for companies that face little or no environmental standards, he said.

Zurich’s head of sustainability, Linda Freiner, said the company moved to eliminate coal used for electricity from its portfolio two years ago, but felt it needed to intensify its effort in line with the IPCC report that warned the world must begin to reduce greenhouse gases dramatically within a decade to have any chance of meeting the 1.5-degree goal.

In a phone interview, Ms. Freiner said Zurich focused on oil sands because it “has the highest percentage of energy lost during extraction, and a very high level of lifecycle GHG intensity.” To support that claim, Zurich pointed to a 2015 study that was published in the journal Environmental Science & Technology by University of Calgary researchers who relied on data from 2011 to 2013. 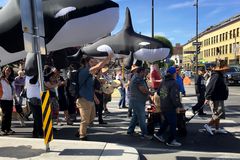