Canada is churning out millionaires, but leaving many people behind.

This year’s global wealth report from Credit Suisse shows Canada with 1.3 million U.S.-dollar millionaires, an increase of about 30,000 from last year.

What’s more, the big international bank projected in its recent study that the number will jump 42 per cent to almost 1.9 million by 2024.

Credit Suisse measures this by looking at financial and non-financial assets, minus debt, and real estate is included.

“For any given country, the number of millionaires depends on three factors: the size of the adult population, average wealth and wealth inequality,” Credit Suisse said, with the U.S. scoring “highly” in the three areas and with 18.6 million millionaires.

That’s 40 per cent of all the millionaires in the world.

Japan had been ranked No. 2 for several years, the bank said, but China has edged it out, with 10 per cent of the world’s millionaires.

“Next come the United Kingdom and Germany with 5 per cent each, followed by France (4 per cent), then Italy, Canada and Australia (3 per cent),” it added.

North America “dominates” here, followed by Europe and countries in the Asia-Pacific region, not including China and India.

“Among individual countries, the United States leads by a huge margin with 80,510 members, equivalent to 48 per cent of the world total,” Credit Suisse said.

NUMBER OF ULTRA-HIGH NET WORTH

NUMBER OF ULTRA-HIGH NET WORTH 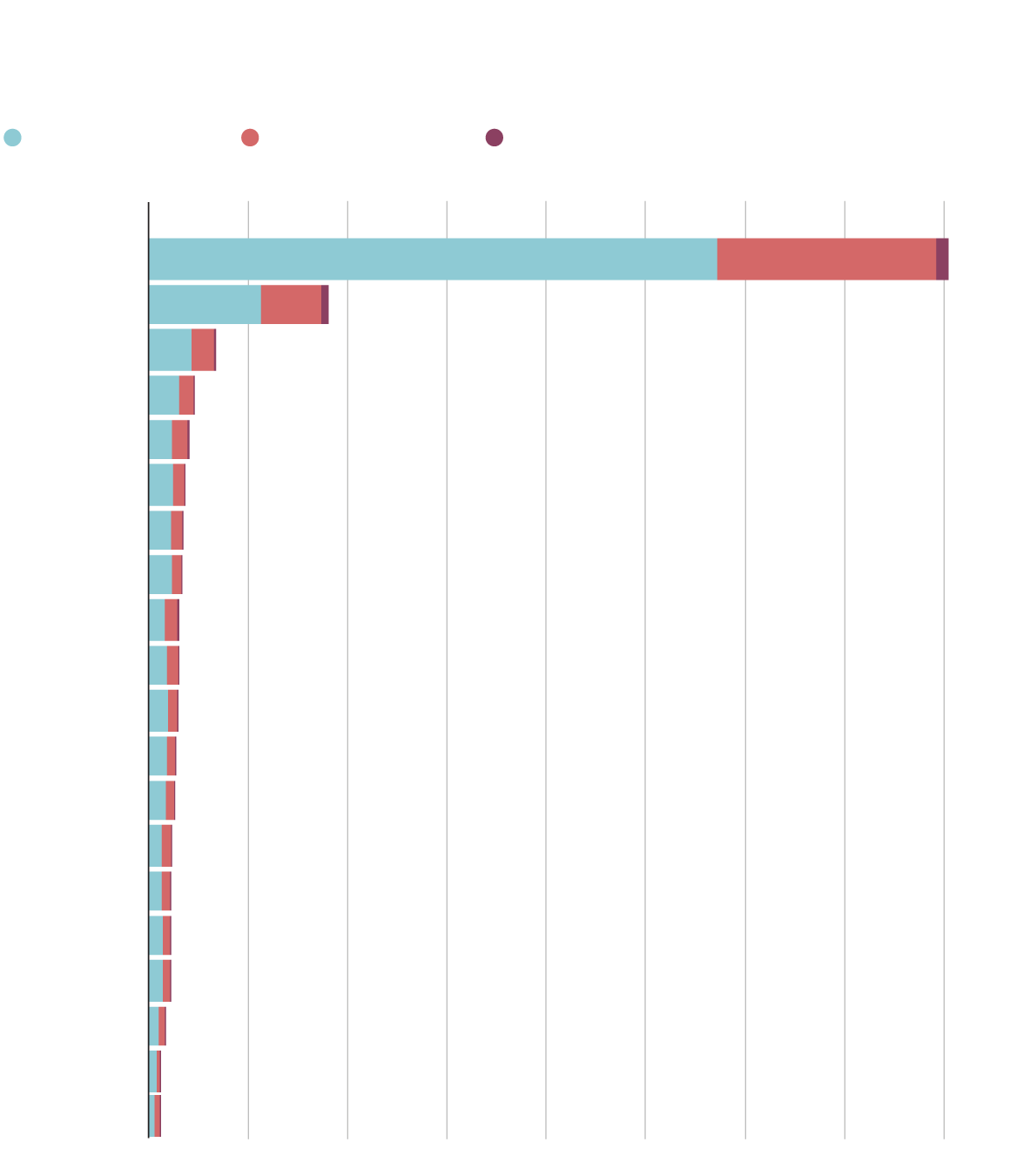 NUMBER OF ULTRA-HIGH NET WORTH INDIVIDUALS IN 2019,

Measuring by median wealth – in Canada, it’s US$107,004 per adult – “favours” countries with lower inequality.

“New Zealand, Canada, and the United Kingdom retain similar positions in the top 10.”

Of course, that doesn’t tell the story.

Consider, for example, that insolvency firm MNP Ltd. released a study Monday showing that 54 per cent of Canadians are now fretting more than they had been over paying their debts.

“The concern could be the result of declining wiggle room in household budgets,” MNP said of its study conducted by Ipsos.

“Canadians say they are, on average, left with $557 at the end of the month, a drop of $142 since June and the lowest level since tracking began in February 2016,” it added.

“Nearly half (48 per cent, +4 pts) say they are left with less than $200 including three in 10 (29 per cent) who say they already don’t make enough money to cover all their bills and debt obligations each month (+4 pts).”

From Reuters: Air Canada reported a 5.7-per-cent rise in quarterly profit, boosted by lower fuel costs and higher airfare in the wake of Boeing’s 737 Max groundings that has constrained capacity. Canada’s largest carrier’s adjusted net income rose to $613-million, or $2.27 a share, in the third quarter, from $580-million, or $2.10 a share, a year earlier.

From Reuters: General Motors Co. posted a better-than-expected quarterly net profit thanks to robust U.S. sales of high-margin pickup trucks and SUVs, but slashed its full-year earnings forecast, citing the impact of a 40-day U.S. labour strike. GM said it now expected full-year adjusted earnings per share between US$4.50 and US$4.80, down from its previous forecast of US$6.50 to US$7 per share. The auto maker posted net income in the third quarter of US$2.3-billion, or YS$1.60 a share, down from US$2.5-billion, or US$1.75 a share, a year earlier. Excluding one-time items, GM earned US$1.72 a share.

From Reuters: Saudi Aramco aims to announce the start of its initial public offering on Nov. 3, three people with direct knowledge of the matter told Reuters, after delaying the deal earlier this month to give advisers time to secure cornerstone investors.

From Reuters: Zimbabwe has raised the price of petrol and diesel by 12 per cent, the second increase this month, the energy regulator said, piling more pressure onto consumers hit by soaring inflation. The last round of fuel price hikes on Oct. 5. saw prices rise 27 per cent and was followed by a 320-per-cent increase in the cost of electricity, triggering a spike in the cost of basic goods such as sugar, maize meal and milk.

From Reuters: South Africa has imposed emergency measures, including rationing, to save dwindling water supplies after an abnormally hot, dry summer coupled with below average rainfall and a spike in usage pushes the country towards a crippling shortage. Dam levels across the country have dropped by 10 per cent to 60 per cent compared to 2018, according to a recent report by the Department of Water and Sanitation, and rising water usage and low rainfall could lead to taps running completely dry, said Minister of Human Settlements, Water and Sanitation, Lindiwe Sisulu.

“The next big rally in U.S. equities will likely come from earnings and not the Fed. This is the third busiest week of earnings, and after this week we will see results from 80 per cent of S&P 500 companies. This week’s results will focus on tech. Yesterday, Google saw spending on cloud business hurt profits, but investing in a key future business should eventually be viewed as a positive. Apple reports on Wednesday and expectations are already pricing in a full-year profit and sales decline for the second time since 2001. Facebook, the social networking giant, is expected to deliver another strong quarter.” Edward Moya, senior market analyst, Oanda

“Also, on Wednesday, the Federal Reserve (Fed) is broadly expected to lower the interest rates by another 25 basis points. The expectation of a third rate cut in the U.S. is reflected in asset prices up to 90 per cent. Meanwhile, the good-looking third-quarter earnings point at an increasing possibility of a hawkish rate cut, meaning that the Fed will likely serve the 25-basis-point cut with a hawkish accompanying statement at this week’s banquet.” Ipek Ozkardeskaya, senior market analyst, London Capital Group

“Equity markets continue to outperform, buoyed by hopes of a first pass trade deal between the United States [and China] and the hopes of a more complete one in a few months, most likely in time for the U.S. presidential elections. This does not recognize that CEO conference board confidence is close to an all-time low and that consumers are also becoming unnerved by talk of a recession as tariffs hit a bit of Christmas spending. Meanwhile Google’s strong advertising earnings reminds us of the fundamental transformation of the economy led by new technologies forcing old sectors to adapt. The question, therefore, is how far this equity recovery can go, the answer is likely until economic data show more weakness amongst consumers as the manufacturing sector is priced in. Hence, we expect any pressure on the U.S. Treasury curve to be quite temporary as investors price more Fed rate cuts.” Sébastien Galy, senior macro strategist, Nordea Asset Management

“The U.S.-China trade situation seems to gathering positive momentum. At the back end of last week we heard that ‘headway’ was being made, and the impression was that phase one of the trade talks was nearly complete. Yesterday, Donald Trump said he hoped a trade pact would be agreed next month. China’s Xi Jinping plus President Trump are due to attend the Asia-Pacific Economic Cooperation meeting in Chile next month. Phase one of the trade deal is tipped to be signed then. The U.S. Trade Representative is considering extending the tariff suspension on US$34-billion worth of Chinese imports. The suspension of levies are due to expire in late December.” David Madden, analyst, CMC Markets

Canadians increased their mortgage borrowing last month at the strongest pace in more than a year, the latest sign that real estate activity is rebounding from a prolonged lull, Matt Lundy writes.