Sellers are holding the upper hand in many cities as Canada’s housing markets continue to rebound.

As The Globe and Mail’s Rachelle Younglai reports, home sales rose 15.5 per cent in September from a year earlier, and 0.6 per cent from August. That month-to-month gain is notable in that it marked the seventh straight increase.

And that, noted Bank of Nova Scotia provincial economist Marc Desormeaux, was “the first streak” of that many months since early 2009.

Average prices gained 5.3 per cent from a year earlier, and the MLS home price index, deemed a better measure, rose 1.3 per cent.

What many potential buyers and sellers really want to know, of course, is whether they’re in buyers’ or sellers’ markets, and Mr. Desormeaux measures this by the ratio of sales to new listings.

On a national basis, this ratio now sits at 61.3 per cent, Mr Desormeaux said.

“That ratio is still indicative of roughly balanced supply-demand conditions, but it was the highest level since January, 2018,” he noted.

Here’s how Mr. Desormeaux measured markets across the country:

Noting the “modest decline" in sales and marginal rise in new listings, Mr. Desormeaux said Montreal held onto the No. 1 position for market tightness.

“Ottawa fell four spots in the rankings following a 2.6-per-cent decrease in home purchases, but was still in sellers’ market territory alongside London, Windsor, Sudbury, Halifax, and major cities in New Brunswick,” he added.

“Saskatoon remained the only centre to report conditions in favour of buyers, though home purchases were mostly down in net oil-producing regions.”

Then there are the special cases of the Vancouver and Toronto areas. Special because the B.C. and Ontario governments moved forcefully to cool those inflated home markets down with tax and other measures.

The federal bank regulator also moved forcefully, though at a national level, with new mortgage-qualification stress tests that came into effect early last year, helping to drive markets down.

As Mr. Desormeaux noted, “momentum persisted” in southern B.C. in September as Vancouver chalked up its fifth sales gain in half a year, nudging up its ratio of sales to new listings to its highest in 20 months.

Sales in the Greater Toronto Area may have slipped, Mr. Desormeaux said, but that followed “solid gains” that ran for half a year.

Importantly, “the sales-to-new-listings ratio remained at its highest level since March 2017 – just before the imposition of a suite of housing policies that included a foreign buyers’ tax in the GTA.”

Sales have been helped along by a drop in mortgage rates, though BMO’s Mr. Kavcic wonders what will happen now.

“Now, longer-term bond yields have backed up alongside some favourable global developments,” Mr. Kavcic said, referring to the fact that five-year fixed mortgage rates are driven by five-year yields, which appear to have bottomed out.

“As a result, the housing market is probably squeezing out the last of this stimulus, at least for now,” he added.

This chart, in which the yield scale is inverted, illustrates what Mr. Kavcic was talking about. 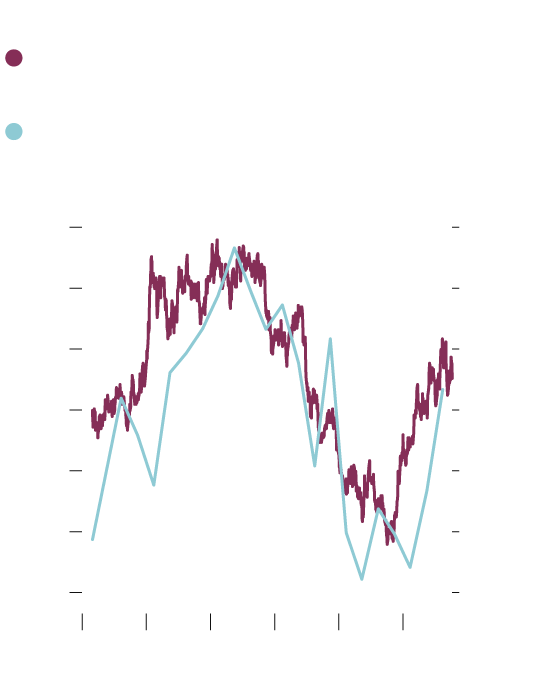 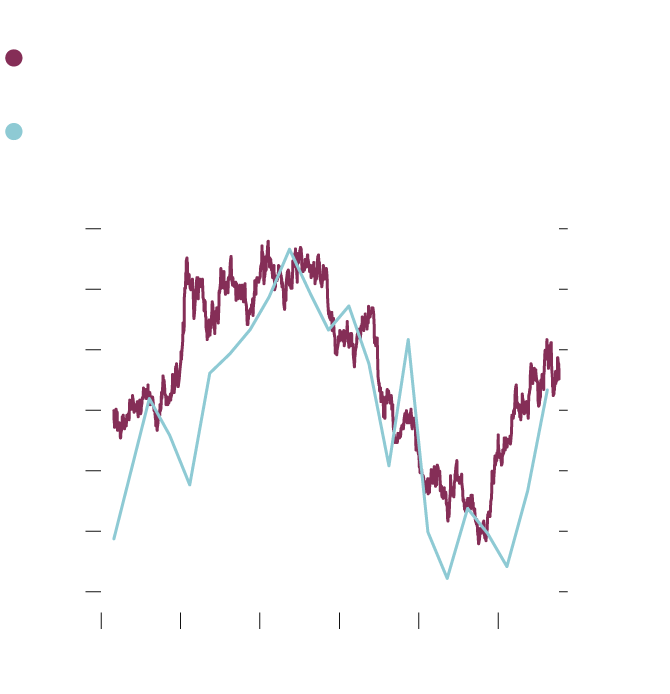 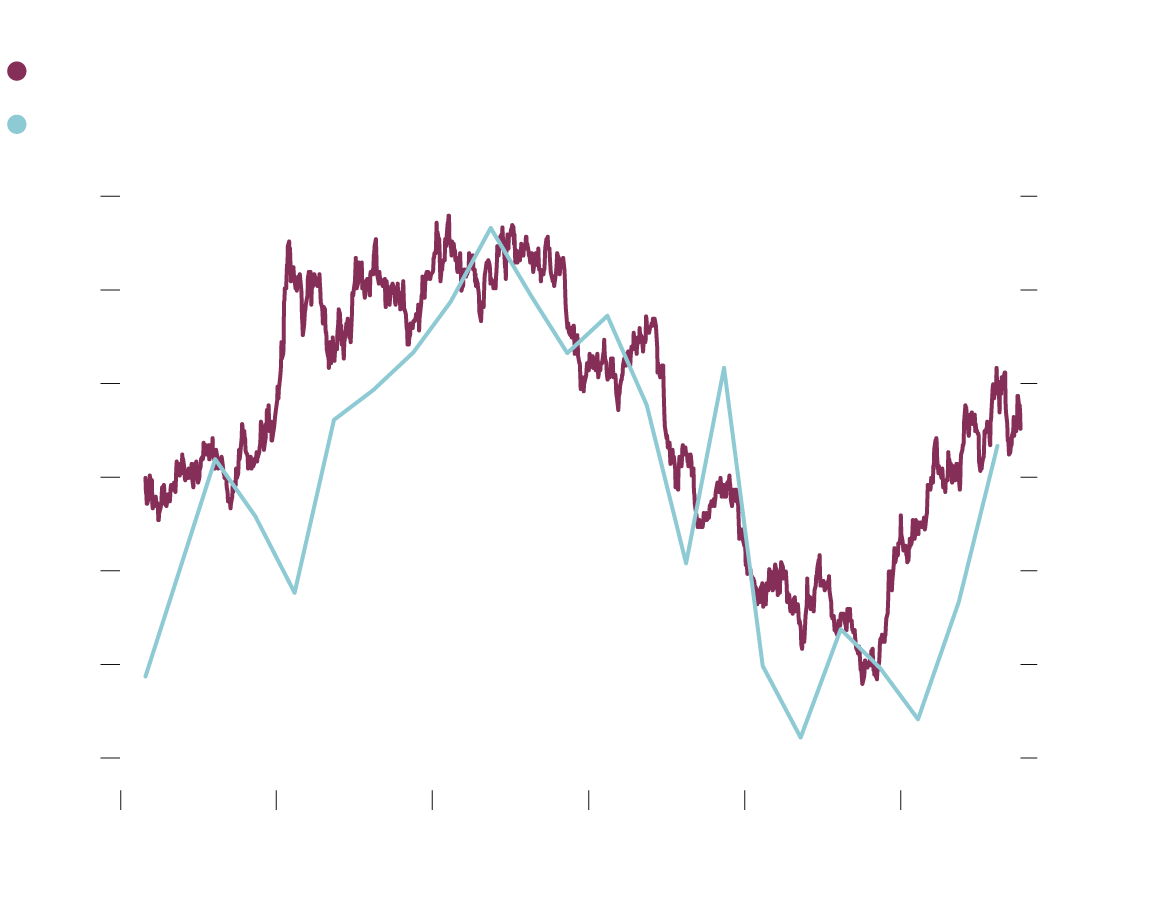 Even with the latest developments, he said, “strong demographic and job fundamentals should keep markets like Vancouver, Toronto, Ottawa and Montreal on firm footing, even if the rate stimulus fades.”

A draft Brexit deal between Britain and the European Union is rippling through financial markets, buoying London stocks and the pound.

“We have one!” European Commission chief Jean-Claude Juncker tweeted. “It’s a fair and balanced agreement for the EU and the U.K. and it is testament to our commitment to find solutions.”

There are still many hurdles, but, at least at this point, investors are buoyed.

“Whether the deal will get approval in Westminster is a different story, but for now, the mood is optimistic," said CMC Markets analyst David Madden.

"The [Democratic Unionist Party] haven’t’ changed their position, which could prove to be an issue, so they bullish sentiment might be short-lived.”

Other observers agreed there could be rough spots ahead.

“Anyone hoping that the process will be straightforward now is kidding themselves,” said Oanda senior market analyst Craig Erlam.

“With Labour whipping for a second referendum on the deal and the Lib Dems unlikely to support anything, there is still a good chance we're heading for an extension and election, in order to get this over the line,” he added.

“Nothing in Brexit is ever simple. It’s going to be a wild weekend which will make the market open next week all the more unpredictable. If the deal gets through Parliament, the pound could perform extremely well at the start of next week, despite having already rebounded more than 8 per cent from the lows a month ago.”

Production “was continuing towards the upper end of the 5.1- to 5.6-million ounce guidance range, and costs “were likely to be at the lower end of the forecast,” the mining giant said in releasing preliminary third-quarter production numbers.

The third quarter, which Barrick said included the effect of its Nevada joint venture, put preliminary sales at 1.32 million ounces of gold and 64 million pounds of copper.

Production and sales n the quarter were shy of those of the second quarter, Barrick said, because of “operational restrictions that were in place for most of the third quarter but were lifted by quarter-end” at its North Mara mine in Tanzania.

Canadian manufacturers scored a rebound in August, as sales climbed 0.8 per cent after two months of losses in a row.

When you strip out price effects, shipments rose 0.6 per cent, so volumes were still stronger, Statistics Canada said today.

The transportation equipment sector saw stronger sales, with all industries in the group posting better results, but for auto parts.

“Sales in the motor vehicle industry rose 2.6 per cent following a 4.6-per-cent decline in July and a 0.3-per-cent decrease in June,” Statistics Canada said.

“Sales in all major assembly plants began to ramp up in August after summer shutdowns that began in July and continued until early August,” it added.

“Production also increased in the aerospace product and parts industry and sales were up in the other transportation equipment industry.”

From Reuters: Morgan Stanley beat estimates for quarterly profit, buoyed by higher revenue from bond trading and mergers and acquisitions advisory fees. Net income attributable to the company rose marginally to US$2.17-billion, or US$1.27 a share, in the third quarter ended Sept. 30, from US$2.11-billion, or US$1.17 a share, a year earlier.

From Reuters: Food group Nestle plans to return up to US$20.13-billion to shareholders over the next three years and reorganize its struggling waters business after organic sales growth slowed in the third quarter. Its organic growth, which strips out currency swings and acquisitions, dipped to 3.7 per cent in the third quarter from 3.9 per cent in the second as prices for its products fell slightly, the maker of KitKat chocolate bars, Maggi noodles and vegan burgers said in a statement.

From Reuters: China will remove business restrictions on foreign banks, brokerages and fund management firms, a cabinet meeting chaired by Premier Li Keqiang said, state television reported. But the move, which comes nearly 18 years after China joined the World Trade Organization, could have limited impact on the competitive landscape of an industry dominated by China’s state firms. China has stepped up efforts to open its financial sector amid a festering trade war with the United States, with increased access to its financial sector among a host of demands from Washington.

“A more optimistic tone from the Chinese raised hopes of a first stage trade deal with the U.S. With the Chinese commerce ministry stating that they hope a phase one deal can be agreed as soon as possible, we are seeing traders shift into the yuan in anticipation of a deal. The dollar has been hit hard over the course of the week, with the dollar index hitting a 50-day low against a backdrop of weakening retail sales data released yesterday. While the trade war has had a detrimental impact on U.S. growth, it has been domestic consumption that has propped up the U.S. economy. Thus, with consumption on the slide, there are obvious question marks over future U.S. growth and the need for further [Federal Reserve] easing.” Joshua Mahony, senior market analyst, IG

“Today, Erdogan will meet with Pence and Pompeo to discuss the situation in Syria. The U.S. is hoping to convince Erdogan to declare a ceasefire; Erdogan has stated that this will ‘never’ happen. Given Turkey is potentially facing additional U.S. sanctions, it will be key to watch if Erdogan eases his stance and whether or not he signals that the operation may end soon. If a ceasefire is declared (or there are signs that the operation will end soon), we expect [the lira] would rally as it would lower the risk that the U.S. imposes sanctions that would ‘swiftly destroy’ Turkey’s economy (though a ceasefire does not completely rule out further sanctions as it will also depend on how Congress reacts).” Elsa Lignos, global head of foreign exchange strategy, Royal Bank of Canada

“Netflix … had a good day, as its third-quarter earnings topped analyst estimates. The company’s shares jumped 11 per cent [after hours], as a better-than-expected performance overseas outweighed the slowing subscriptions partly due to rising fees at home. Netflix said it aims to aboard 7 million new international customers over the next three months, but warned that the launch of Apple TV and Disney+ ‘will be noisy,’ and there could be a ‘modest headwind’ to their near-term growth, which has been factored in in their fourth-quarter guidance.” Ipek Ozkardeskaya, senior market analyst, London Capital Group

Cannabis edibles are legal now. Alexandra Posadzki tells you what you need to know.

Aphria Inc. awarded Irwin Simon a $10-million pay package when he was brought on as interim chief executive officer in March to help stabilize the company after it was rocked by a short-seller’s report. David Milstead and Mark Rendell report.