“I want to be a live-streamer when I grow up.”

These might seem like the words of a kid dreaming of an all-play-no-work future. But increasingly, live-streaming is a viable career plan, especially if you’ve got ace gaming skills.

It’s the kind of job that appeals to a younger demographic – Millennials and Gen Z – looking for a new type of career option. Aspirational jobs are no longer just doctors and lawyers, but also a new crop of professions and work situations that are changing the definition of a “dream job.”

For example, in a 2020 global Deloitte survey of Millennial and Generation Z workers, nearly two-thirds said that working remotely enables a better work/life balance. And in their 2019 Welcome to Generation Z report, Deloitte report found that a majority prefer to work in industries that they interact with in their personal lives.

Over the last 10 years, live-streaming service Twitch has gone from a niche platform to a content juggernaut. On any given day, 3.3 million viewers will tune in to consume content produced by 9.6 million streamers, largely videogame live-streaming. With a swelling audience that’s hungry for content and willing to pay for it, the fantasy of gaming for a living isn’t far out of reach.

Gaming with a personal touch

Stéphanie Harvey (Twitch handle: MissHarvey) was an early adopter of the platform, joining just a few years after Twitch launched in 2011. Already a professional esports athlete, she saw the channel as a chance to build her brand. “It was a new way for me to gather fans,” she says.

She set up a webcam at her desk in her Quebec City bedroom and went live, screen-sharing while playing first-person shooter Counterstrike and giving a running commentary. Within two years, she became one of the platform’s biggest stars. And with that notoriety came cash – sometimes as much as $10,000 a month.

Twitch content producers can make money through ad revenue, or through the platform’s affiliate program, which gives creators a cut of subscription profits. While superstars can earn seven-figure incomes this way – popular streamer xQcOW brought home US$1.96-million last year – you don’t need millions of followers to support yourself. A study by research organization Business of Apps found that experienced streamers playing 40 hours a week can make an average of US$3,000 to US$5,000 per month from subscribers.

Robin Lee – known as HiveQueen on Twitch – turned streaming from a hobby to a career two years ago. She left her teaching job when she hit 5,000 paying subscribers on a channel she’d started just for fun.

“It’s not that I didn’t love the job [I was doing before]. I just loved streaming more,” Lee says.

Now, Lee streams six or seven hours a night, Thursdays through Sundays, from her home in the Ottawa suburbs. As a teacher, Lee was making around $4,000 a month. As a full-time Twitch streamer, she’s bringing in about the same: $4,000 to $5,000 monthly.

The games she plays varies – sometimes fantasy roleplaying game World of Warcraft, sometimes action/adventure game Grand Theft Auto – but her audience doesn’t seem to mind. She makes an effort to remember details about the regulars in the chat, such as who works in security or who’s logging in from Australia, to give personal shout-outs, making her feed conversational and welcoming.

For Lee and many other professional streamers, it’s the personal touch, not elite gaming, that the audience is really tuning in for.

“You can build a $60,000 per year job just from getting 100 people to love you,” says Swish Goswami, the Toronto-based founder of social intelligence platform Trufan. Of course, finding those 100 people is easier said than done, he says. As with any art form, there’s no magic formula for charming the general public. But generally speaking, Goswami says it’s about finding your niche, whether it’s hosting a talk show, baking, or playing videogames, and creating consistent, quality content.

“Don’t invest $10,000 in equipment right away,” she says. “You need a good mic, but not the best mic. People care about personality.”

Flexibility, fun and a bit of risk

Christine Tran is a doctoral student at the University of Toronto’s Faculty of Information whose research focuses on self-representation on the internet, particularly in the areas of Twitch game streaming. Tran notes that the COVID-19 pandemic has accelerated the rise of streaming, helping to legitimize content creator and video producer roles.

As mainstream celebrity and public figures use the tool for communication or self-promotion – like U.S. congresswoman Alexandria Ocasio-Cortez streaming the game Among Us last summer – the medium gains even more credibility, Tran says.

“Live streaming seems attractive, particularly for a generation with marked student debt and unemployment precarity,” she says. “And now with COVID-19, a sense of isolation. So the idea of playing games while becoming famous, having a community and getting paid to do it? That’s remarkably attractive.”

Ultimately, Twitch streaming is like any other freelance work, says Richard Lachman, associate professor at Ryerson University’s RTA School of Media. If you have a health crisis, or need a vacation day, or your chosen platform ceases operation (as Twitch competitor Mixer did last July), there is no safety net to catch you. Plus, popularity matters.

“This work can be freeing, but it can also be terrifying, being beholden to platforms and fans,” Lachman says.

While Lee loves the flexibility and fun of playing video games for a living, she also recognizes the precarity of the situation. Recently diagnosed with arthritis, she’s dependent on her husband’s benefits to support her medical needs.

But while there may be no floor to catch you, there isn’t a ceiling holding you back either. Top streamers like Tfue (10.2 million followers) and Pokimane (7.6 million followers) have used the platform to build fame, fortune and ultimately careers for themselves.

For Harvey, on the other hand, streaming is an enjoyable part-time pursuit. She’s scaled back her participation from her early days on the platform, streaming for fun once or twice a week for her 120,000 subscribers. It brings in about $1,000 a month: a nice bit of pocket money, without the pressure.

“When it’s your full time job, it can be intense, and awful for your mental health,” Harvey says. “I like having other income so I can actually have fun when I’m streaming. It doesn’t feel like work.” 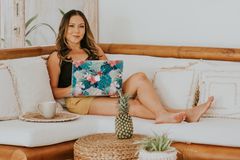