This is the third story in a multi-part series called Business of Fun, which gets inside the minds of creative types across numerous disciplines and industries. 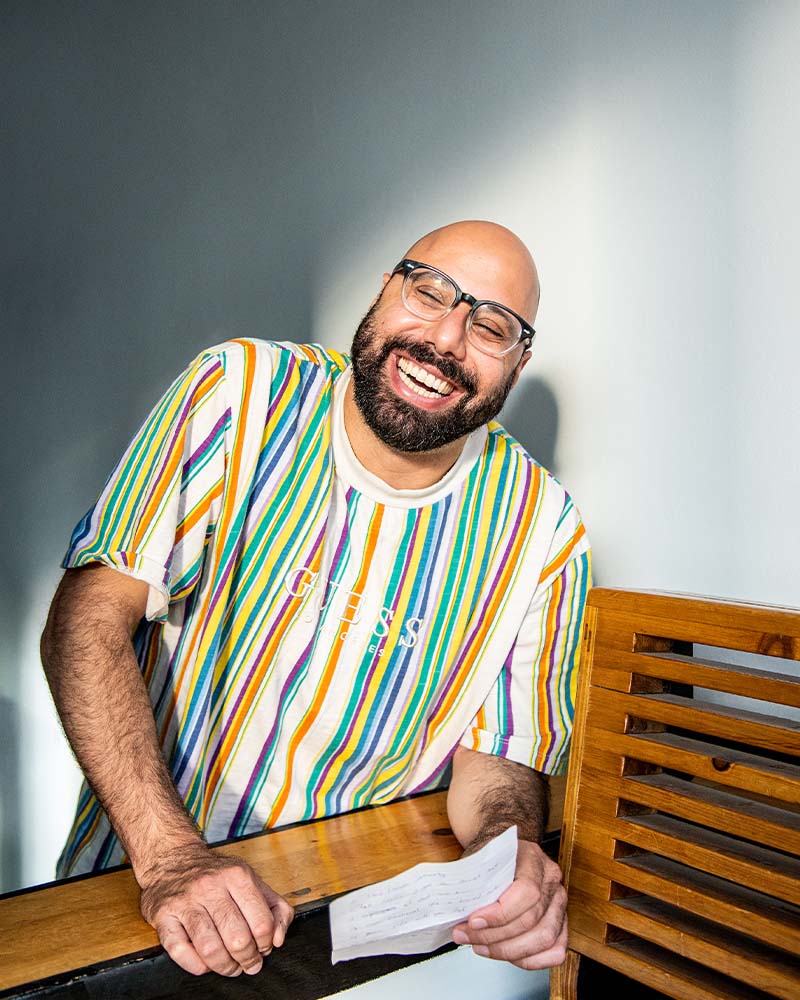 Merheje's vulnerability, mixed with an intoxicating blend of anxiety and anger, has made him one of the funniest comedians to recently come out of Canada.

Comedian Dave Merheje wipes his brow for a moment. It’s a hot summer afternoon in Toronto and he’s nursing a beer in his favorite barbershop/cocktail bar. The topic of conversation is his stand-up special Beautifully Manic, which airs on Netflix as part of Comedians of the World. Though a critical and popular success, Merheje, 39, was stung by the few negative reviews that were posted online. “I have trouble with that,” he admits. “When I started doing stand-up I’d be depressed for a week or so after a show I didn’t feel went well. I’d just feel horrible. Now it’s better, I’m just depressed that night.” 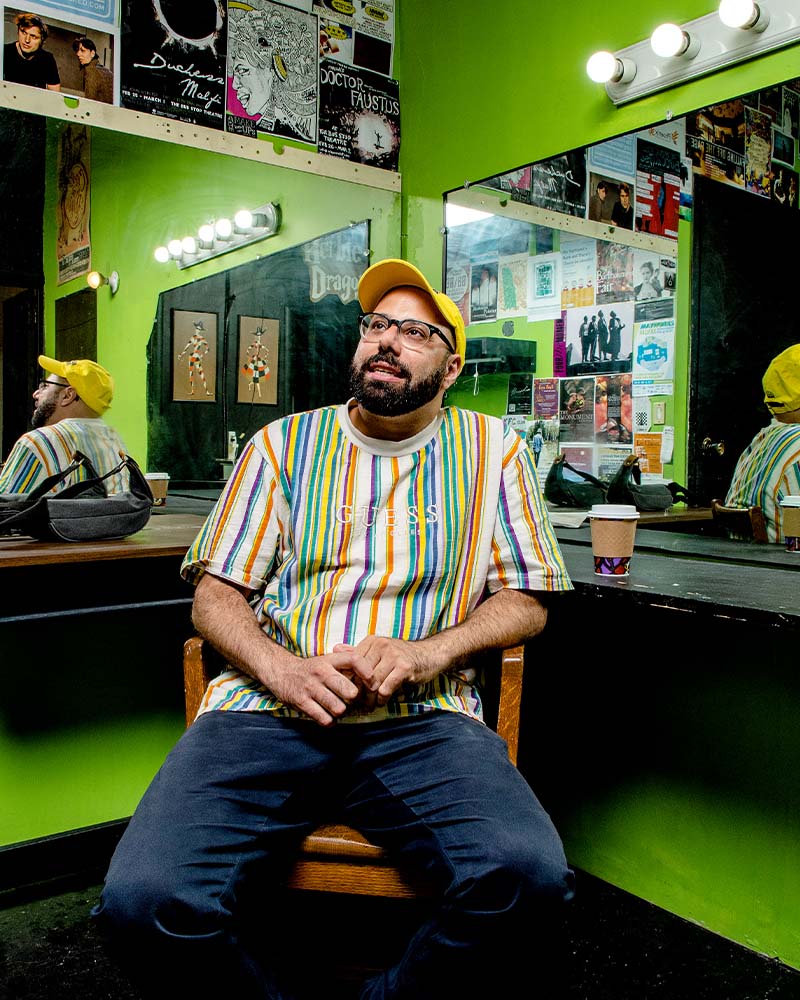 Merjehe preps in the green room of The Bus Stop Theatre in Halifax, NS.

It’s this vulnerability, mixed with an intoxicating blend of anxiety and anger, that has made Merheje one of the funniest comedians to recently come out of Canada. Over the last 19 years, he has meticulously honed a unique style that is a product of his nimble, angst-ridden mind. He’s had to overcome personal insecurity and outside criticism. His act is autobiographical and delivered in a blistering stream of consciousness.

In essence, Merheje unleashes a comedic hurricane and sits his audience in the eye of the storm. Here’s Merheje describing being robbed for the first time: “He’s got the gun to my head and he goes, ‘Give me everything you’ve got.’ That’s too broad of a question. Everything you’ve got? Can you be more specific? I have coupons in my pocket and a hundred dollars. I can’t give this guy coupons. I don’t know if he likes the store that I go to with these coupons…”

In 2019, he is finally reaping some rewards. His comedy special Good Friend Bad Grammar won the 2019 Juno Award for Comedy Album of the year. This fall, Merheje will return to film the second season of Ramy, a Hulu series starring comedian Ramy Youssef as a first-generation Egyptian-American millennial living in New Jersey. Merheje plays Ramy’s married friend Ahmed. The New York Times called Ramy “quietly revolutionary comedy.” Merheje will be back in Toronto September 27 and 28 performing as part of the JFL 42 Festival.

His story starts in his hometown of Windsor, Ont. The son of two Lebanese immigrants, Merheje went to Catholic school and discovered comedy when an uncle showed him videotapes of comedians such as Eddie Murphy, Andrew Dice Clay and Richard Pryor. He and his siblings (he has two brothers and a sister, all younger) would entertain themselves making fake sitcoms, which they would record on audio cassettes.

I knew I wasn’t handsome. I’d make people laugh and that would allow me to do my thing.

He talks about growing up in Beautifully Manic. “You got to understand, my parents moved from Lebanon and they moved to Windsor, right? I was born in Windsor, Canada, that’s where I was born. They taught me only how to speak Arabic and sent me to school. Do you know how crazy that is? That’s psychotic. I went to kindergarten, I didn’t know … my dad dropped me off and he goes ‘Okay man, have a good day.’ And drove off. That was the first time I heard English.”

Merheje discovered comedy could be social currency. “I was an ugly kid. I had buck teeth, I could feel it. I knew I wasn’t handsome. I’d make people laugh and that would allow me to do my thing. I can be funny and get in with people. I never really stopped.” After graduating high school, Merheje enrolled in a marketing program at St. Clair College. He knew he wanted to pursue comedy and his parents supported his decision. “They just said, ‘Get a diploma first. Then do what you want.’”

Thus began his apprenticeship. Merheje performed at Windsor Yuk Yuk’s and at comedy clubs in Detroit. “I felt way safer on stage than I did doing a presentation at college. I knew that this was what I was supposed to be doing.” His schedule was gruelling: college all day and comedy all night. The terrorist attacks of 9-11 made his work more difficult. “It was like night and day. We were used to driving over to Detroit to buy milk. And then it seemed like anyone who was Middle Eastern was a suspect.”

After finishing his diploma, Merheje spent a year working 12-hour shifts at a capsule-making factory in order to save enough money to move to Toronto. Once there, Merheje averaged four shows a night. He also worked nine-to-five at a Chapters-Indigo. “I never slept. I’d bring my uniform with me and, once I was done my gigs, I’d put it on and sleep a few hours on a friend’s floor.”

Merheje soon established himself as a talented set-up/punchline comedian, a traditional form of comedy in which the set-up is a premise and the punchline a surprise twist. The late American comedian Mitch Hedberg was a master of this genre. For instance: “I like rice” (set-up). “Rice is great when you're hungry and you want 2,000 of something” (punchline).

"I get an idea and put it onstage and do four sets a night, and I track it until I find the purest form of the material.” 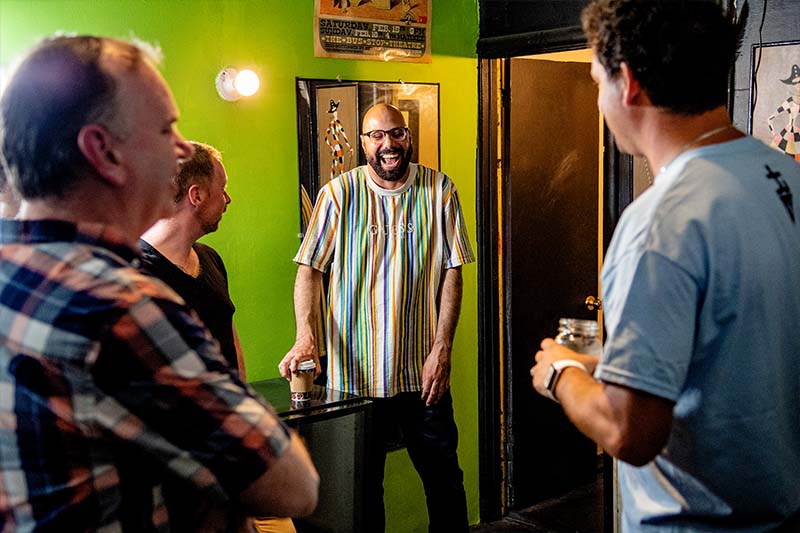 Merheje chats with friends before the show. 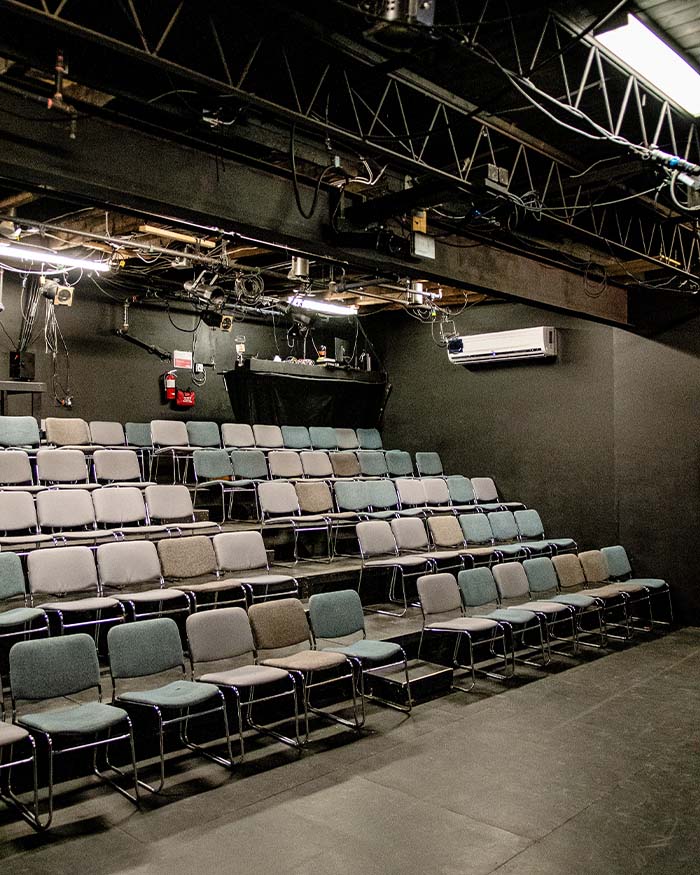 Seats at the Bus Stop Theatre in Halifax.

Merheje spent hours filling notebooks with ideas and jokes. He rose up the stand-up comedy ranks, but he was uneasy. He wanted to use his life as fodder. He wanted to talk about his family and his Lebanese heritage. Merheje was particularly inspired by his father, whom he describes as a “Lebanese Larry David.” But he’d been warned off this by other comedians. “I would do my father’s accent on stage and someone said, ‘You shouldn’t do that. It’s hacky.’ But I’d wonder, other comics can talk about their families. Why can’t I? I can’t talk about my dad because he has an accent?”

Today, Merheje credits comedian and comedy instructor Rob Trick for pushing him to move into more raw and personal territory. Trick ran a show in Toronto called Rants for Rent. “Everyone would put in money and the best act won the pot,” Merheje recalls. “Rob wanted you to find your own voice up there through ranting. You’d get heckled. One time I went off. I lost it. I snapped. When I got off stage Darryl said to me, ‘That was dope. You should keep doing whatever that was.’”

Merheje decided to discard his set-up/punchline style and went through the difficult process of breaking his act down and rebuilding it. He began performing stream-of-consciousness riffs, many of them inspired by his family and personal life. At first, the results were mixed. “I bombed a lot. People called me ‘Mister Premise’ because they thought I didn’t have punchlines. But I thought, ‘Do you want to spend the rest of your life being inauthentic?’”

One time I went off. I lost it. I snapped. When I got off stage Darryl said to me, ‘That was dope. You should keep doing whatever that was.’

There were plenty of what he calls “hell gigs.” Merheje once performed in an Alberta bar where the stage was set up in front of a liquor store check-out. One customer began to heckle and Merheje called him out, “Who the hell do you think you are?” “I’m the mayor,” the man replied, then bought his beer and left.

As painful as the process was, it paid big dividends. Merheje crafted a signature style, one that attracted industry attention. In 2011, he won the Just For Laughs Homegrown Competition and won Now Magazine’s Best of Toronto Award for Best Male Standup. The validation helped rejuvenate his ambitions and Merheje went on to score acting work on the CBC series Mr. D. and to gain the attention of comedy bookers in the United States. He auditioned for Ramy by video while performing in China and won the role of Ahmed, a neurotic companion who doesn’t drink or smoke and worries about Ramy’s future. Merheje, who was raised Catholic, was intrigued by the challenge of playing a devout Muslim. 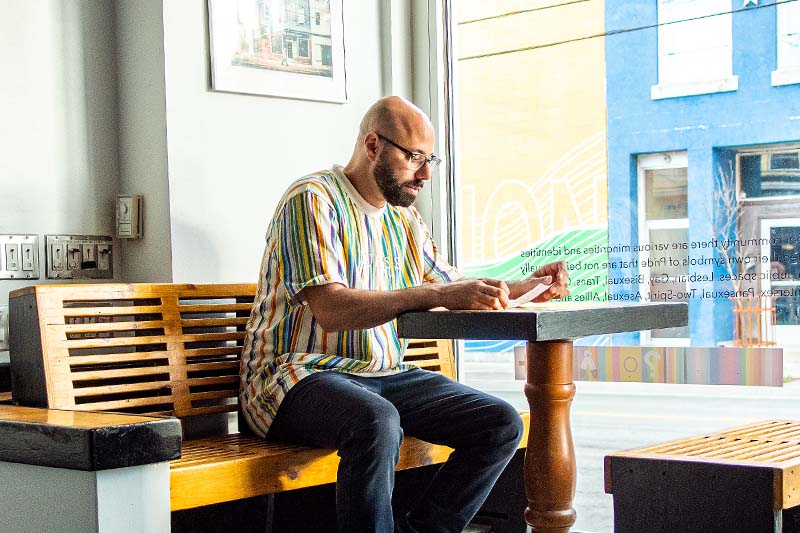 Merheje reviews notes before his show.

More recently, Merheje has been developing a series with fellow comedian Ali Hassan, the host of Laugh Out Loud on CBC Radio and SiriusXM. He still likes to work his material before an audience. “I get an idea and put it onstage and do four sets a night, and I track it until I find the purest form of the material.”

He doesn’t worry where his talent will take him next. “Any time I’m looking ahead, ahead of a gig, ahead to something else or wondering if it will lead to something, it’s not fun. It’s stifling. If you live in the moment, it’s fun. The best shows I’ve ever had happened when I said to myself, ‘I’m just going to have fun.’”