This is the first story in a multi-part series called Business of Fun, which gets inside the minds of creative types across numerous disciplines and industries. 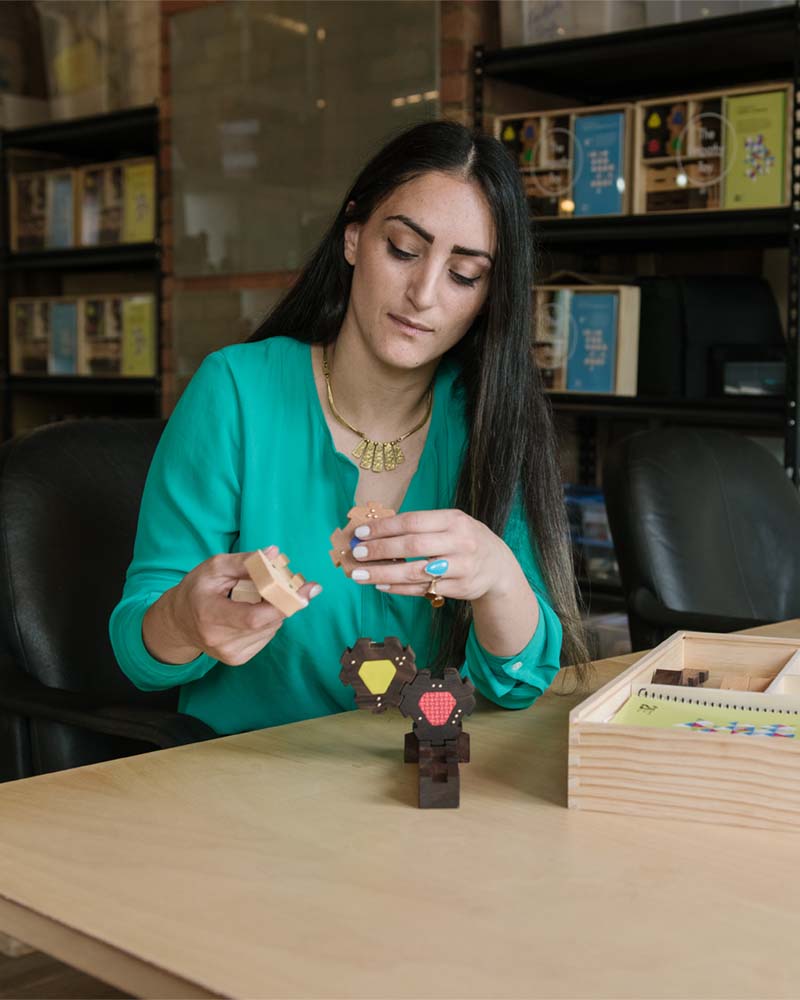 Ilana Ben-Ari’s career in toys began when she was an industrial design student at Carleton University.

There’s a swing right in the middle of Twenty One Toys’ Toronto office. The swing, strung from the 12-foot ceiling, tempts you to sit in it. As we chat, I give in to the temptation and swing a bit; but not for too long, because CEO and lead designer Ilana Ben-Ari’s team surround us, working on the job of fun. 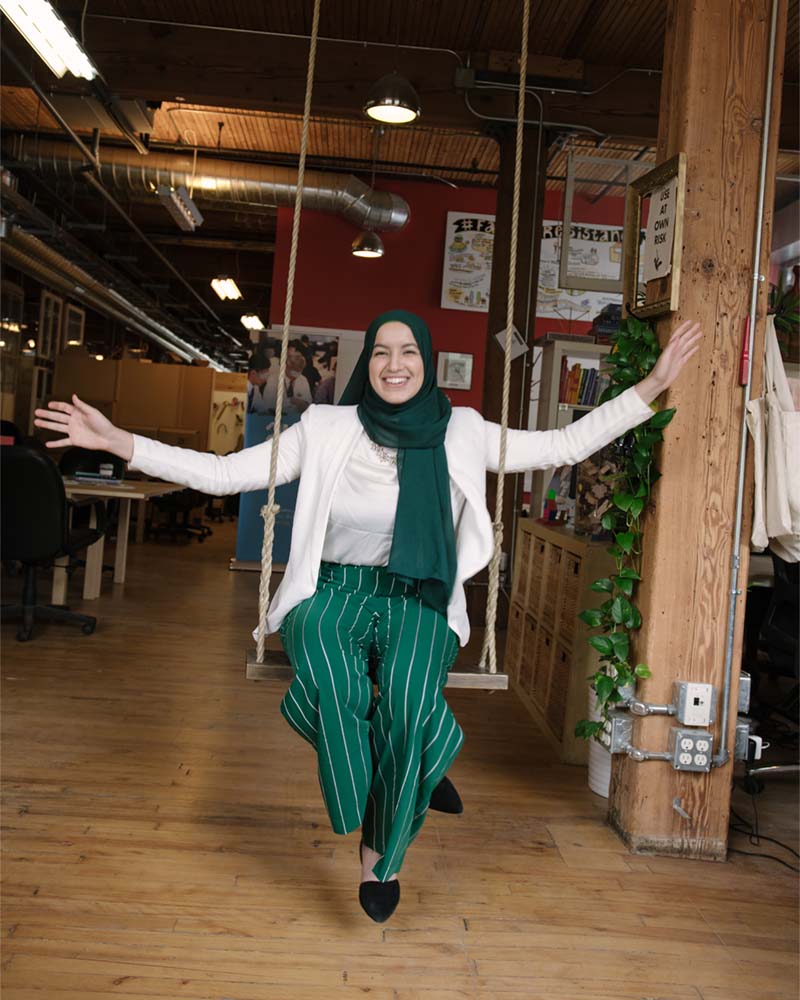 The swing right in the middle of Twenty One Toys’ Toronto office.

Twenty One Toys hosts a product demo at their office to test out their new Failure toy.

The company’s home in a co-working space at the Centre for Social Innovation is open, encouraging collaboration among the 20-person team, but there’s a space carved out in the open area. It’s Ms. Ben-Ari’s office, a space with three six-foot walls surrounding her desk, creating a private nook with reminders and business notes tacked on the walls. It’s a small space, crammed with books, notepads and pens in an organized chaos.

This blend of the personal and the public is key to her creative process, the one that brought us the Empathy and Failure toys, two puzzle-based teaching toys that emphasize play-based learning, exploring themes such as empathy and learning from failure. The toys are used in schools and offices in 48 countries around the world and Twenty One Toys also provides training on how to utilize them.

Forget single-player mode: These are not toys you play by yourself.

Instead of sitting in her office, Ms. Ben-Ari scoops up one of the Failure toys and we head to a coffee shop. We grab a small table and the toy sits between us, its six-sided pieces, almost like spinning tops, nestled inside a hoop. Against the hum of the coffee shop and a young guy eavesdropping on our conversation, Ms. Ben-Ari takes a sip of her flat white and talks about the push-pull of collaboration-versus-alone time when designing.

Ms. Ben-Ari’s career in toys began when she was an industrial design student at Carleton University and was tasked by the Canadian National Institute for the Blind with creating a toy for the visually impaired. Instead of creating what she laughingly describes as “a BlackBerry with really big buttons,” she researched and spoke to people with visual impairment as well as their friends and family. With that information, she designed a toy that such young students could play, together with sighted friends. The then-named Connexion Toy for Empathy and Creative Dialogue is a blindfolded puzzle game that can only be solved when players learn to work together.

I’ve learned as a creator that I need a lot of time and I need to think of my time as a very, very easy sacred asset.

But her interest in puzzles started much earlier. Ms. Ben-Ari’s mother eschewed Barbies and got her gender-neutral toys like puzzle- and riddle-based games. “I loved anything that challenged my brain to think about building, shapes, patterns and complex riddles,” she says.

Toy design sounds simple: do some research, talk to a few people, produce a toy prototype, test and launch it into the world. But Ms. Ben-Ari says her creative process has taught her what works for her – as a creative person and business owner.

“I’ve learned as a creator that I need a lot of time and I need to think of my time as a very, very easy sacred asset. My joke is that running a business is the best way to make you stop being creative, which isn't true,” she says. “Business people are some of the most creative people. I know that you are under so much stress and you are solving problems every other minute, that you can be so close to the problem and so overwhelmed that the idea of thinking ‘big picture’ is almost near impossible.”

Ms. Ben-Ari solves that problem by compartmentalizing her time. Monday to Wednesday she wears her CEO hat: back-to-back meetings, solving problems and ensuring her team is aligned on goals. “It does mean my day starts at 10 a.m. and it goes until 8 p.m. but that gives me the ability to be fully present for my team so I can answer all their questions,” she says. “So then any nervous anxiety or stress that I could have because of all the things that can come up in a day, I know that I'm talking to my team about it, so I can hopefully give them the tools that they need to solve it.”

With business taken care of, Ms. Ben-Ari can focus on Thursdays and Fridays, her creative time. That means getting out of the office with a sketch pad and heading to a coffee shop. 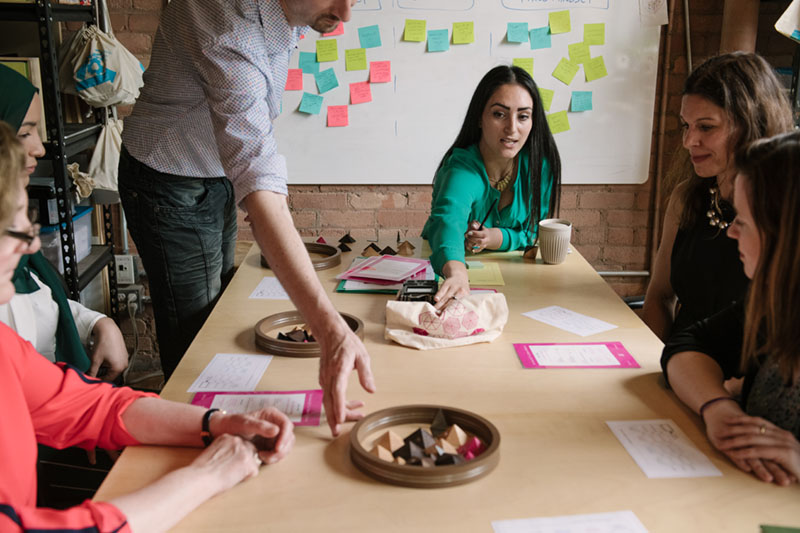 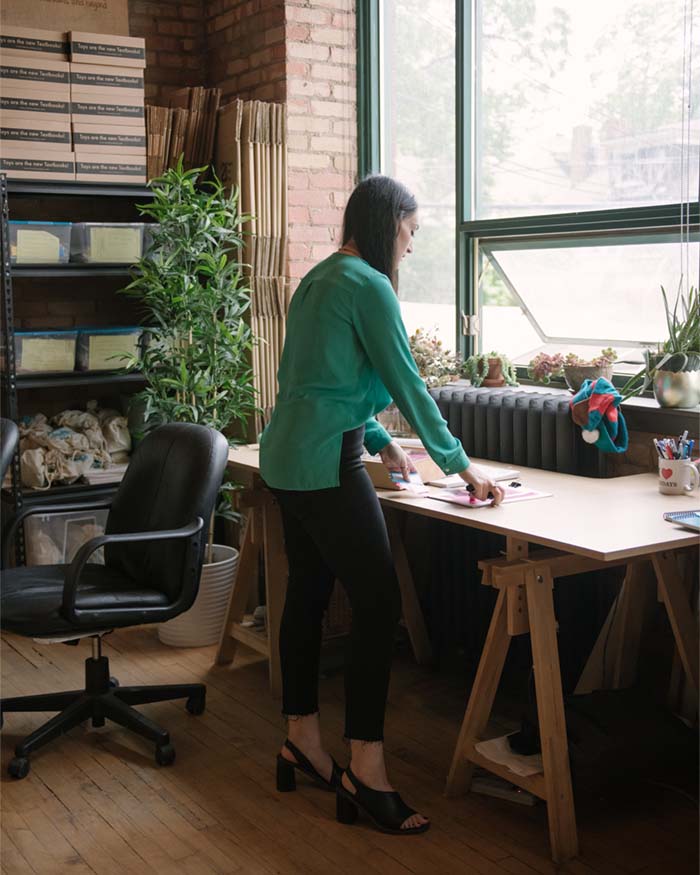 Ms. Ben-Ari says her creative process has taught her what works for her, both as a creative person and business owner.

“I have these 11-by-17-inch big white sketch pads that are not filled with that many drawings. They're mostly filled with words, conversations and thought bubbles but also coffee talks with people,” she says. “When I designed the Empathy toy I was speaking primarily to the visually impaired community, and when I was designing the Failure toy, I talked to teachers, corporate business leaders, educators and designers.”

Her sketch pad does contain some drawings. She was designing the Failure toy in a coffee shop one day when she looked at a coffee cup lid in a new light. “I was using [the lids] to make circles as I was exploring what the Failure Toy needed to do. I didn't know how to manifest it with shapes. So what I was doing was exploring different shapes, and in my head I was imagining how would that shape fit with the other [parts of the toy].” That was the moment she realized the toy needed metal bow ties. She rushed home, contacted some metal shops, and within three days had prototypes in her hand.

“I wouldn't have been able to keep that momentum and that train of thought if I hadn't let myself sit for two hours in a coffee shop, just not doing anything and not getting to the right answer. You need to explore a lot of the wrong answers to get to what you think is the right answer,” she says.

Ms. Ben-Ari has a habit of taking toys out to bars, restaurants and when she meets up with friends.

This isn’t the first time sitting in a crowded space sparked an idea. Ms. Ben-Ari has a habit of taking toys out to bars, restaurants and when she meets up with friends. When she was designing the Empathy toy, she used to play with other toys with her eyes closed.

One night, she and her friends were playing Kerplunk in the school’s design studio. Ms. Ben-Ari had her eyes closed and a friend of hers thought it would be hilarious to drop all the pieces in front of the Kerplunk tube. “It's really stressful but that was one of the most important moments for the toy because one of my friends did that. My eyes were still closed and I panicked because I didn’t know where anything was. But then my very good friend, another designer, started giving me instructions.” 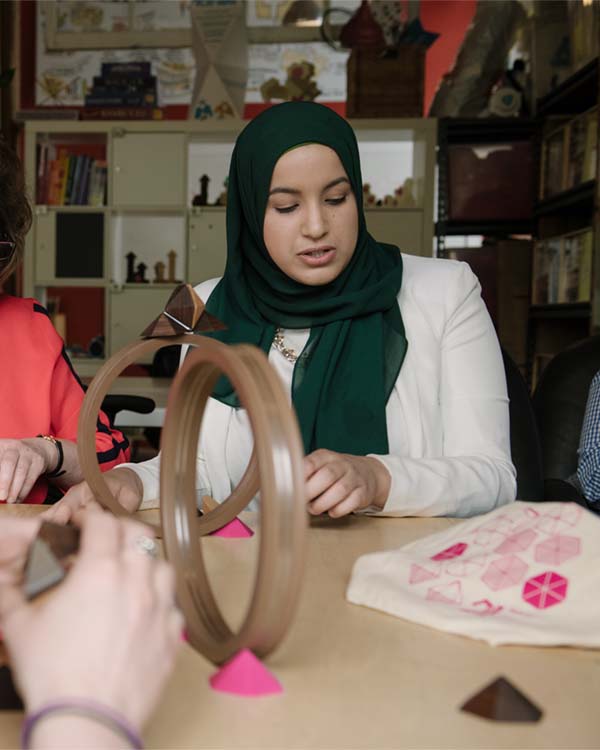 When designing the failure toy, Ms. Ben-Ari was unpacking the core elements of failure and why people think of it as such an ugly word. 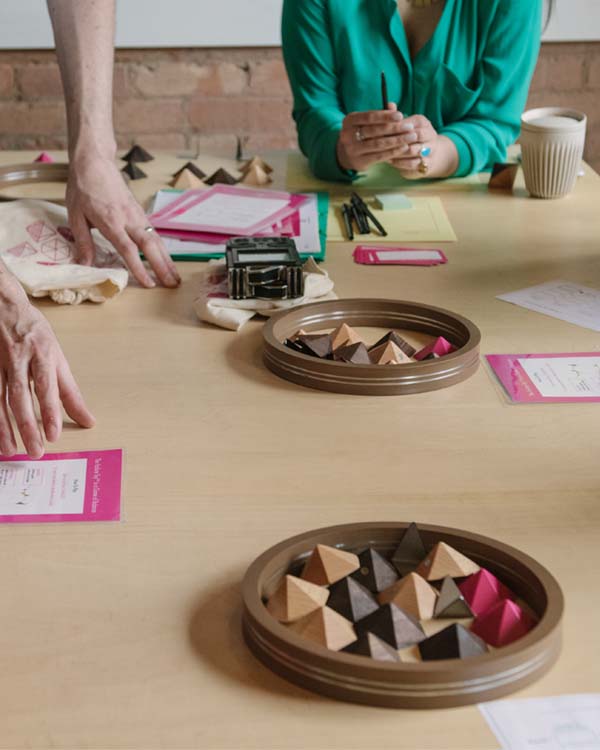 Our notion of success, she says, and how we compare ourselves to others is a big part of it. “So there’s blame or shame, but there’s also competition.” 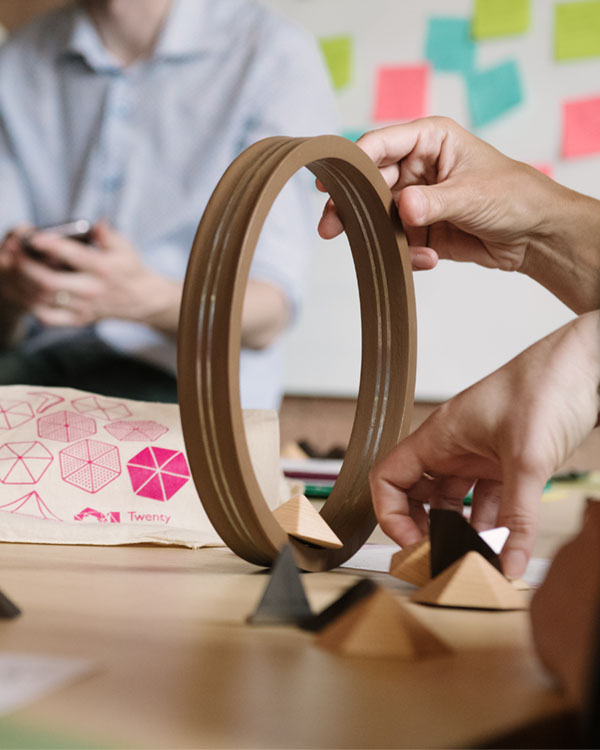 “I thought, ‘How do I translate that into physical products that touch that nerve, that hit that nerve?’” The goal of the toy is to teach failure as something that can be practiced and developed as a skill.

That was the moment she realized that she was working on a collaborative puzzle. “I wouldn't have gotten to that if I hadn't brought the tools into an unknown space and if I didn’t have friends that were being jerks.” 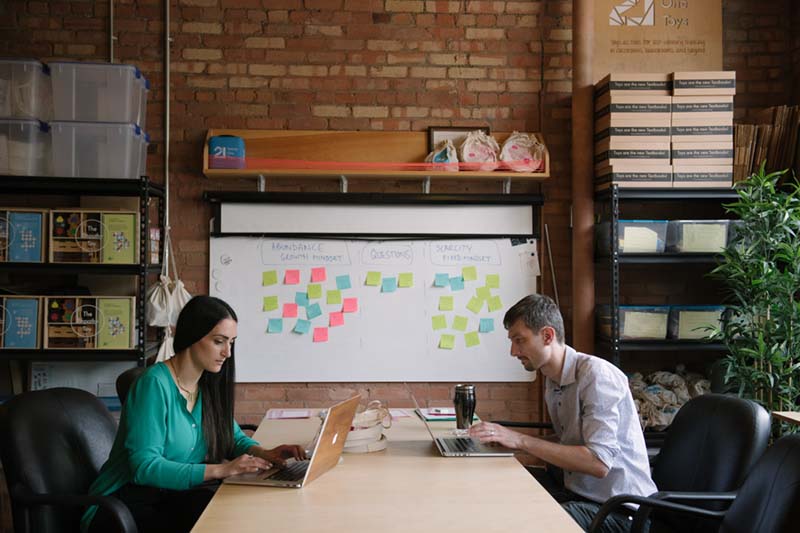 Outside of her CEO life, Ms. Ben-Ari likes to relax with dinners with friends, who sometimes bring instruments for a night of music. And every so often, they might play a game or two like Settlers of Catan.

“That doesn't always happen,” she laughs. “But yeah, that's probably one of the most important things I need to have in my life to balance the huge amount of pressure and levels of loneliness that you experience as an entrepreneur.”

While Ms. Ben-Ari is coy on her business plans, she does say that Twenty One Toys is expanding, and expecting to double the number of team members soon. That may mean leaving their current space. She looks around and admits she’ll miss the tall windows in the CSI building for their natural light. And, of course, the natural energy of a space made for collaboration.