Scott Nicholson really does believe life is a game, and he’s turned it into a fascinating career

This is the second story in a multi-part series called Business of Fun, which gets inside the minds of creative types across numerous disciplines and industries.

The one-minute video starts with a team of four young Slovenian people dressed in black-and-white baseball jackets. They scour a small room with white walls, scan through an iPad and dash off through a door into another room, where they’re greeted with battered white walls, tinted deep green from the overhead light. 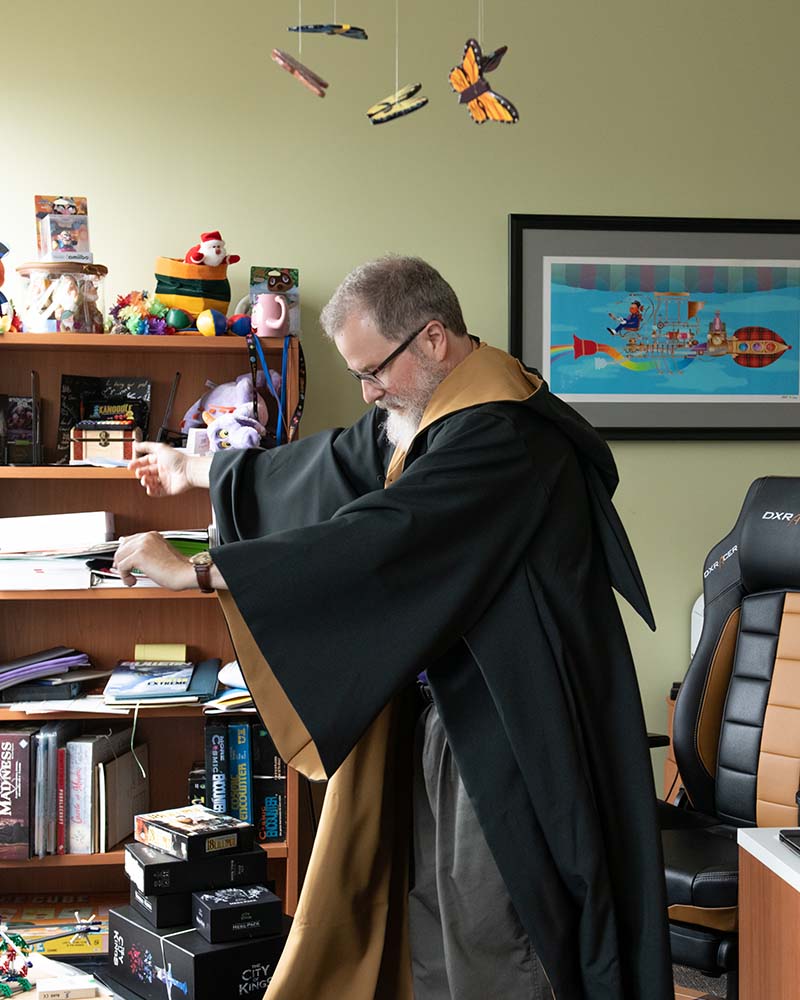 Mr. Nicholson in his office at Wilfrid Laurier University, where he is a professor of game design.

A team of students work with Mr. Nicholson in the BNGlab.

One pushes buttons while the other hunches over a table, searching for the next clue. Eventually, after scrambling through multiple rooms that look like every underground bunker and submarine interior in the movies, and working their way through physical and electronic puzzles, including looking under a plant, they dash through the final door. The team cheer, high-fiving each other and the judges as they’re declared the winners in the 2019 Red Bull Mind Gamers Escape Room World Championships.

‘Mastermind Dr. Nicholson’ isn’t the Riddler, a super villain who likes to challenge the Bat-heroes with puzzles. He’s a professor of game design at the Brantford campus of Wilfrid Laurier University, where he runs the BGNlab.

“I started the game design program at Laurier, where we focus on making games to change the world for good,” Nicholson says. He specializes in physical games, such as board games and escape rooms, and was the first person on YouTube with a board-games show, Board Games with Scott, which ran from 2005-2010. While he was hosting the show, he was a library school professor, studying how libraries could use games and he designed his first board game based on the tulip mania incident in 17th-century Netherlands, where bulbs of the prized flower soared in price and ended in a devastating crash.

He spent some time as a visiting professor 2011-2012 at the Massachusetts Institute of Technology (MIT) in Comparative Media Studies and the Singapore-MIT GAMBIT Game Lab from 2011 to 2012. He was then recruited by Wilfred Laurier to start the Game Design and Development program in 2014, where he started studying escape rooms. That, plus his MIT connections, led him to be invited to be the lead designer for the 2017 and 2019 Red Bull Mind Gamers Escape Room World Championships.

At the moment, Nicholson is planning his own escape – to the country. He’s moving to a farm, similar to the one where he grew up and served as the foundation for his journey and future career as a games designer. It all started with him wanting to play board games.

On larping with the International Fantasy Game Society

“I grew up on a horse farm in rural Oklahoma and so I would set up a board game, but no one would play it with me,” he says. “I would sit and set up the board game and play all of the positions myself, which is something I actually still do today if I need to learn or explore a game. But by doing that, that's where I learned game design.” He says that by playing games by himself, that’s where he learned about game systems and mechanisms. “You get to start to understand the design and the concepts of it.”

Nicholson followed his interest, getting involved in Dungeons & Dragons (D&D) in college, but the biggest impact for him was when he started larping (live action role-play) with the International Fantasy Gaming Society. It was there that he learned the foundations of storytelling and character design.

Part of the appeal of escape rooms is not only the challenge, but also the idea behind the game. For Nicholson, his best ideas come from his years of experience playing and designing games, and from thinking of the world as a game.

“I remember when I was up for tenure, the person who was working with me on my tenure case looked at me and said, ‘Scott, do you see all of this as a game?’ And I said, ‘Yes, it is.’ As I said, it's a center. We live in a space, it's got rules and rules are explicit or implicit and we can engage with those rules and not engage with those rules, but they're always running. It’s decades of having built up that body of knowledge is what I tap.”

"Having an intergenerational design team with multiple genders and multiple backgrounds, that's how you get a wide spectrum of ideas" 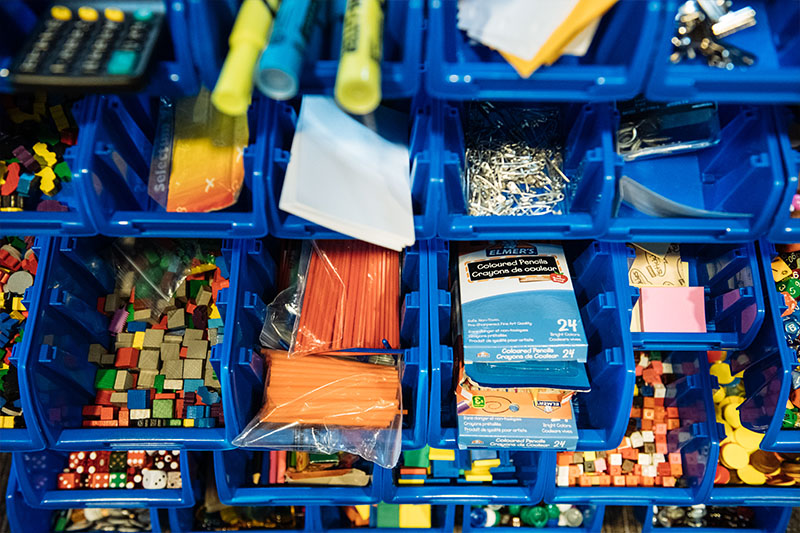 Just some of the tools available to students at BNGlab. 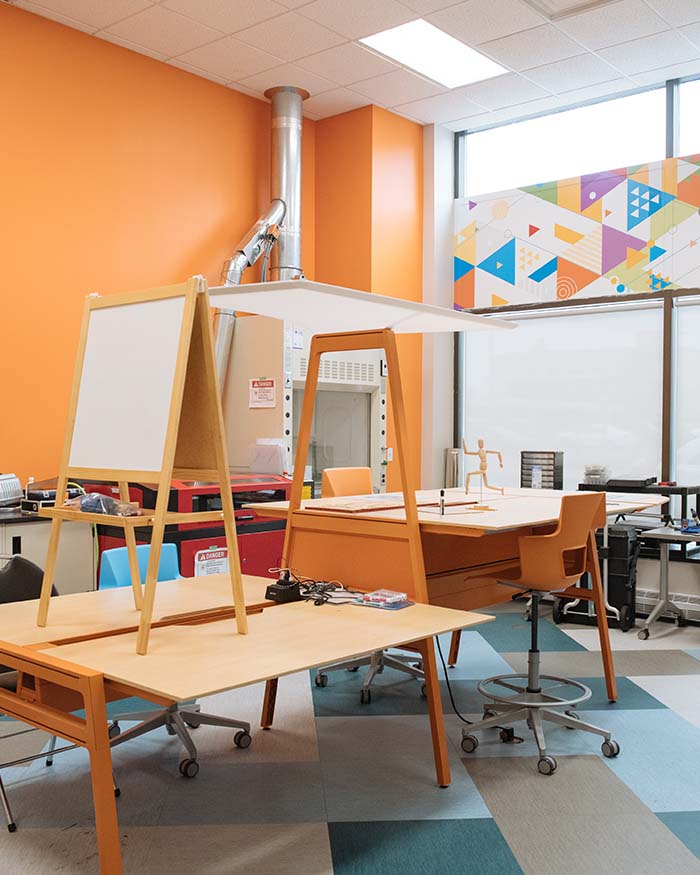 His experience is vast, but he also leverages the students who lounge in the BGNlab. When he’s mulling over an idea, he heads into the lounge attached to the lab and chats with his 18-20-year-old students, which often triggers something from his history of gaming. He says he benefits from different perspectives, and from the diversity of students and their ideas.

“Having an intergenerational design team with multiple genders, multiple backgrounds and as diverse as we can, that's how you get a wide spectrum of ideas coming to the table, plus it helps the students realize that everything you see in the world, TV shows, movies and what you read – all of that represents a fertile ground to pull your games from. That's how we stay away from being stale and making a game that looks just like the last year's game,” he says.

He also uses members of the public as game testers. Since the campus is downtown and across from the public library and local mall, they run tests with the public at the two locations before the games are released.

The goal of Mr. Nicholson's games is to teach teamwork, learn a little history and, of course, to be challenged and have fun.

Prototyping and testing are essential to the Mr. Nicholson's design process.

With one of Nicholson’s escape rooms, a family can put the screens away and work together to defeat a common challenge while learning something in the process. The trick, he says, is to use types of actions to appeal to different age groups. For example, a young child will like to hide or instructions might be given via audio. Older kids and adults get challenging puzzles to solve, and there might be the gamemaster, a character in the game who can help the family along by giving them directions that they may or may not choose to listen to as they play through the game. The goal of his games is to teach teamwork, learn a little history of the place and time where the game is set and, of course, to be challenged and have fun. 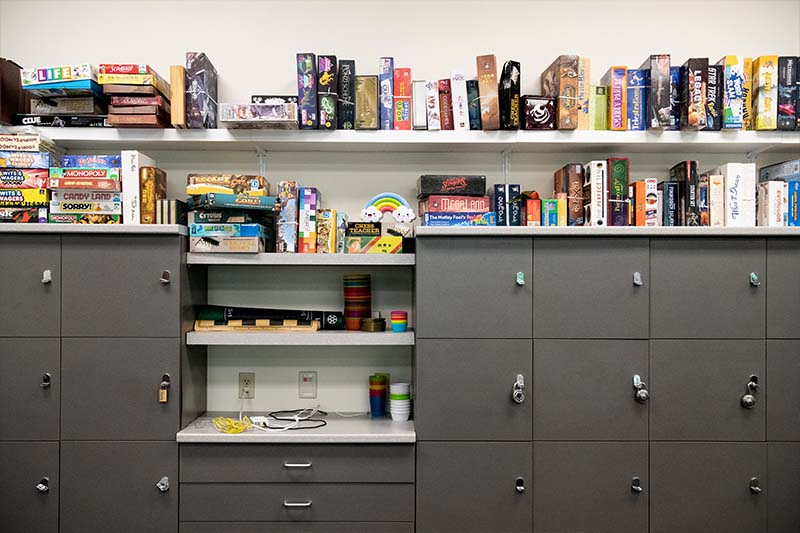 Mr. Nicholson surrounds himself with games, including the impressive library housed in BNGlab.

For a man who designs games, you’d expect him to spent his downtime away from games, but no. When he relaxes, he relaxes with a console in his hands. That’s right, the game designer relaxes with video games.

“Analog games are games and escape rooms,” he says. “That's what I'm doing for work. Video games are things that I'm playing for fun when I'm playing. If I'm playing video games, then that's a time I can just shut off.”

There’s also the farm where he’s just moved by himself. Growing up on a farm, having some land and open space helps him recharge. “I'm finding getting back outside and engaging with the land and engaging with pottering around the barn and doing little tasks, all of those things are really helping me to recharge with the world around me.”