It’s hard to get a mannequin to simulate anaphylactic shock or cardiac arrest, which is why Fahad Alam is such a fan of virtual reality.

Dr. Alam, a staff anesthesiologist at Toronto’s Sunnybrook Hospital and co-founder of the Collaborative Human Immersive Interaction Laboratory, is currently testing a VR training system that he thinks will revolutionize how students learn in his field of medicine. He says it will be live and in use by the end of this year alongside physical training methods, which rely heavily on mannequins.

“It can only enhance learning,” he said. “There are times when they’ll complement each other.”

The system primarily uses the HTC Vive, a VR headset that works in conjunction with sensors placed around a room to create an immersive virtual environment that the wearer can move around in. Users also hold controllers to simulate hand movements and actions.

In conjunction with a team of researchers and developers at Sunnybrook and the University of Ontario Institute of Technology, Dr. Alam has virtually recreated one of the hospital’s operating rooms. The VR version is very faithful to the real thing, he says, right down to the placement of vials and drawers.

The value of the recreation is its ability to simulate various crisis events, which currently can only be addressed on a theoretical basis in real-world training sessions; students have had to imagine a training mannequin going into cardiac arrest, but with VR, they’ll be able to see it happen and react accordingly.

Almost as importantly, they will be able to train wherever they may be. The system will also work with Oculus Rift and potentially other VR headsets, which means students can use it at home and avoid having to travel to a properly equipped hospital or clinic.

“There are certain elements where we can use … VR to replace how much time or the lack of accessibility there is with the mannequin-based simulation,” Dr. Alam said.

Developing the system wasn’t easy. Though commercially available VR headsets can cost as little as a few hundred dollars each, developing software for them is expensive. Creating the operating room took hundreds of hours over six months, for example, and generating a single crisis event cost about $30,000.

It’s for those reasons that VR and its cousin, augmented reality (AR) – which involves overlaying the real world with interactive computer graphics through some form of screen or glasses, rather than a fully immersive headset – have failed to live up to the hype they generated a few years ago.

The technologies were expected to be big in the consumer space, particularly gaming, but when that didn’t happen, industry watchers thought they could take off in enterprise situations such as training.

That pivot also didn’t materialize, largely because of the high cost of developing custom software.

With the hardware now generally working and affordable, experts believe the focus needs to shift if VR and AR are to become truly viable workplace-training tools.

“The biggest thing holding this back is the content creation,” said Michael Barnett-Cowan, an assistant professor of neuroscience at the University of Waterloo. “The recognition is starting to emerge that the industry needs to create development tools that enable people to create their content much more easily.”

Dr. Alam believes the hard part is over for his team. They now have a software base from which to work, so further iterations of their training system should be easier and cheaper to produce. Once their project goes into use, they also plan to release it publicly as open-source software, thus allowing other hospitals to use it freely.

And medicine may be one of the fields in which the relatively high cost of VR and AR development makes sense, according to Rekha Ranganathan, president of Montreal-based CAE Healthcare. The potential benefits, as Sunnybrook’s efforts with anesthesia training suggest, are too great to ignore.

CAE, which got its start in aviation simulators in 1947, entered the health-care business in 2011 in anticipation of a burgeoning market. The company is now seeing double-digit growth as organizations adopt its AR-based simulators, which use Microsoft’s HoloLens headset.

“This is what they’re thinking about for training centres for the future,” Ms. Ranganathan said. “From a health-care perspective, I don’t see this going away. We are just at the tip of the iceberg.”

Opinion
How to get strategic with a gig work force
Subscriber content
August 19, 2019 Food and beverage industry starting to address the mental health elephant in the room
August 19, 2019 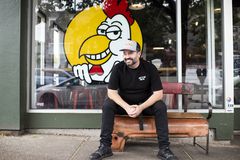