U.S. women who acquire an MBA earn a 63-per-cent salary “bump” with their degree but fail to close the pay gap with men after graduation, according to new study.

These female master of business administration graduates also do not advance to the same level as men in the corporate world, are given fewer people to manage and report less job satisfaction, according to the study by Texas-based Forté Foundation, a business education advocacy organization for women, and based on research by Michelle Wieser, interim dean of the business school at St. Catherine University in Minnesota.

“An MBA is a great step for so many women to take but it does not necessarily solve all the problems all the way to the C-suite,” says Elissa Sangster, executive director of Forté, urging corporate leaders to rethink promotion and family-leave policies.

The U.S. data, based on an online survey of 900 male and female MBA graduates between 2005 and 2017, resonate with Canadian researchers and MBA students.

“At a minimum, Canada is the same as the U.S. or potentially worse when it comes to a lot of these gender and career issues,” says Sarah Kaplan, director of the Institute for Gender and the Economy at the University of Toronto’s Rotman School of Management.

Among TSX-listed companies, 3.3 per cent are led by women and 3.5 per cent of boards have a female board chair, according to a 2018 report by Osler law firm’s corporate governance group. Last year, women held 9.44 per cent of the most senior corporate jobs at Canada’s top-100 publicly traded companies, according to an annual survey by Rosenzweig and Co., a Toronto-based executive search company.

Compared with the United States, Dr. Kaplan says, Canada provides longer maternity leaves (often up to one year) and displays more entrenched gender norms that assume women are largely responsible for care-giving. Even when companies offer paid paternity leaves, she adds, some middle managers try to discourage new fathers from taking time off for the baby.

“It is okay to take family time,” Dr. Kaplan says. “It doesn’t actually indicate a lack of commitment to your job.”

The Forté survey still confirms the MBA as a powerful tool for moving up the corporate ladder. Compared with their pre-MBA position, women in the survey said their salaries climbed 63 per cent after graduation, although men reported a 76-per-cent rise.

However, the survey found that a predegree gender pay gap of 3 per cent, with women lagging men, widened to 10 per cent for the first post-MBA position and 28 per cent for current compensation, adjusted for years of experience.

“It is time for companies to really pay attention to this and make sure they have eradicated any unconscious bias and that they have been completely clear about what it takes to get to the top and are those realistic,” she says. For example, some companies require those in a leadership pipeline to travel abroad for assignments. “Is that necessary for someone to be a good leader in your organization?” she asks.

Rotman’s Dr. Kaplan argues that real change rests on making structural reforms to company hiring and promotion practices. At present, she says, employees who want to join the leadership track have to opt in and say, "'I want to get promoted.'”

But she says preliminary findings by Rotman researchers show gender pay differences close when a company includes all mid-level candidates in the leadership track, leaving it up to individuals to opt out if they choose.

Forté Foundation, which works with industry and business schools to provide scholarships, networking and coaching for women, encourages on-campus “men as allies” clubs to support discussions on diversity and inclusion. Rotman’s Women in Management Association, for example, includes a “Wimen” network of male MBA candidates who participate in workshops and other diversity activities.

Still, the Forté survey found that just one of three men (compared to two of three women) believe in the existence of a gender pay gap.

“That statistic was shocking to read on paper,” says Rotman MBA candidate Sarah Badun, a vice-president of the school’s Women in Management Association and a Forté Fellow. “This is an issue both genders will need to get involved with to close the inequality and close the wage gap.”

This week, with male MBA students, her association held a conference on tangible strategies for anyone to support gender equality in the workplace. “We need women to create a community to support one another and help drive change,” says Ms. Badun, who graduates this spring. “But we need the support of our male counterparts to recognize these issues, talk about them, support women and help drive the change.”

“Business school is such a safe place to talk about things and deepen your understanding of a whole variety of issues,” she says. 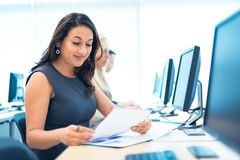