This is the 18th story in our series looking at MBAs and other business-school graduates who are working in non-traditional fields.

As a trained actor and producer, as well as TV and movie writer, Chaz Thorne has always had the creativity and ability to turn his hand to whatever challenge lay in front of him.

But the prospect of going back to school at 38 – 18 years after graduating from the National Theatre School of Canada – was daunting.

Mr. Thorne, in addition to appearing on stage and screen, raised millions of dollars and stickhandled large-scale movie projects during his arts career before segueing into a new role as an entrepreneur, in 2010 founding Nile Fiber Atlantic Canada Inc., an agricultural biomass company in Halifax.

On a new career track, Mr. Thorne then realized he needed to improve his business education in an effort to give investors confidence in his company.

So in 2013 he started an executive master of business administration (EMBA) program jointly run by Kellogg School of Management at Northwestern University in suburban Chicago and the Schulich School of Business at York University in Toronto.

Mr. Thorne was attracted to the program’s exposure to both U.S. and Canadian business, as well as being part of an elite international network of executives. But underpinning both of those, he knew what getting an EMBA could do for his business knowledge.

“Really the focus on an EMBA is to raise your level of thinking to enterprise-level thinking,” he says. “It’s to get you ready for the big jobs that require you to have more of an understanding and appreciation of an entire business, not just one operational silo.”

In flying to classes in both Chicago and Toronto every other weekend from his native Nova Scotia, Mr. Thorne found himself as something of an anomaly among his fellow students. While almost all of them had worked in various departments of differing corporations, as someone with both an entertainment and entrepreneurial background, he had done neither.

But instead of looking upon this negatively, he viewed this as an advantage, giving him the ability to pull back from one particular departmental need and look at what is best for the collective whole.

“It’s really about creating empathy for the needs of an entire organization and not just seeing it from a particular point of view based on, ‘Oh, I’m a marketer,’ or, ‘Oh, I’m a salesperson or an accountant.’”

Finishing his course work a week before turning 40, Mr. Thorne brought his skills to bear in 2016 as one of three co-founders of The Give Agency, a consultancy that brings together volunteer local business leaders to produce marketing and fundraising ideas for a non-profit organization.

Conducting brainstorming sessions in either Halifax, Montreal or Toronto, The Give Agency has so far held about a half-dozen such events.

Mr. Thorne, now 44, says that one of the biggest challenges in his new role is harnessing the power of a collection of leaders with different objectives, incentives and education levels.

However, he says the empathy he gained for different departments of an organization while doing his EMBA helps him negotiate this challenge, and ultimately led him to write a book, Barn Raising For Business: The Leader’s Guide to Getting Better Decisions Faster.

“It was about how can you distill all of this down to the absolute simplest way to get everyone with all of these different backgrounds pushing in the same direction in the shortest time possible,” he says.

One of his chief roles with The Give Agency is ensuring there’s a defined and disciplined strategy in place so the non-profit organizations get the maximum benefit from the limited time available, usually just one day.

While obtaining his EMBA helped, part of his skill in this area was formed on movie sets, where there are countless systems in place to ensure everything runs like a Swiss train.

“Everyone understands what their job is,” Mr. Thorne says of life on a movie set. “What that entails, how it supports other jobs and, of course, it needs to be done really quickly because you’re burning hundreds or thousands of dollars every few minutes.”

While he left his role as president and chief operating officer of Nile Fiber shortly after starting The Give Agency, Mr. Thorne and his co-founders, Brian Hickling and Mike Maloney, simultaneously launched Barn Raisers Strategic Inc., which uses the same rapid-fire decision-making strategies for for-profit organizations, such as Sun Life Financial or Weston Foods.

“With our consulting clients, what we’re doing is we’re helping them solve really hairy, cross-functional problems,” he says. “Not just within one operational silo but oftentimes across the organization, and I wouldn’t have been able to engage all those different functions with empathy if I didn’t have that EMBA.”

The results are starting to show as The Give Agency is creating ripples within the non-profit world. When Boys and Girls Clubs of Canada had its consulting day with The Give Agency, one of the ideas that came out was to play a game of basketball on Parliament Hill to raise awareness of its work.

So last June, members of Parliament joined youth from across Canada for an hour of hoops as part of the organization’s Unplug to Connect program, which encourages people to put down their smartphones and immerse themselves in the real world around them.

Mathieu Chantelois, vice-president of marketing and development for Boys and Girls Clubs, says an organization like The Give Agency is “absolutely unique” and allows non-profits like his to flourish.

“It’s so 10 years or 20 years ago to just sign a cheque to a non-profit and not do anything,” he says, referencing how fundraising has evolved. “You need to create some social value to the work that you are doing and that’s what they are doing with The Give Agency.”

While the work of The Give Agency is still in its infancy, Mr. Thorne says it is immensely satisfying to see what organizations do with the ideas generated during their dedicated brainstorming days.

And while he admits that it was difficult to go back to school in his late 30s, he says that his pivot from the world of arts to the world of business has been interesting, and one that he has yet to fully understand.

“I really am still trying to find my footing in that,” he says. “My hope is that each year I’ll just continue to move closer and closer [to] realizing what my purpose is that got me started on his whole EMBA journey and dipping into the organizational world.” 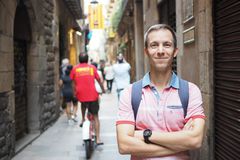 Dalhousie MBA stickhandles side role as a hockey agent
December 17, 2018 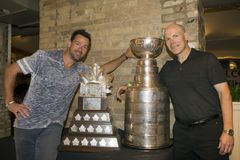 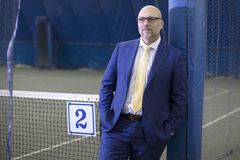