This is the 17th story in our series looking at MBAs and other business-school graduates who are working in non-traditional fields.

Mike Smith, the co-founder of No. 22, a small but revered titanium bicycle brand, has always had bicycles in his blood, even when he had to curb the preoccupation through four years of the most intense education you could imagine.

He had saddled up regularly and passionately as a kid, and during his business undergrad at McMaster University in Hamilton, he worked at the city’s iconic Pieriks Cycle shop. But in the fall of 2007, Mr. Smith suddenly had less time for cycling when he dove into a sparsely populated pool, namely, the one in which people do their law degree and MBA at the same time. It’s a four-year program offered at York University in Toronto and its law school, Osgoode Hall.

You might think this was the sign of someone highly determined to succeed academically, but Mr. Smith offers a different take.

“The truth,” he says, laughing over the bustle of brunch at Carbon Bar on Queen Street East in Toronto on a bright Sunday, “is that I wasn’t sure I’d be able to go back to school after getting out. I mean, normally, people work a few years and then go back and do an MBA, but I figured it might be pretty hard for me to switch gears and leave a career once I’d gotten it started, so I thought I’d just barge right through and squeeze it all in.”

The fork in the road, or on the bike, perhaps, came when Mr. Smith finished his joint degree. He knew he had business DNA in him through his entrepreneurial parents, but, as with most law school grads, the courtship process with various firms began in earnest at the end of third year (although it was fourth year in the joint program).

What Mr. Smith found dizzying was the speed and frenzy of it all, the pace of speaking to 40 firms over two days, like speed dating on steroids, followed by wining and dining, offers, considerations and the hyper competitiveness of it all.

“You just feel like it’s your one and only shot and that all these people are the best, and this is what they all want, and so that must mean that you want it, too, and it’s what I’m supposed to do,” he says.

“But I guess what surprised me is that all the firms I talked to, and the one I ended up articling with, Stikeman [Elliott LLP], all said the same thing, which was that they were all attracted to someone with initiative and who was a self-starter. They all wanted to hire people with an entrepreneurial spirit. But that’s what is kind of ironic about it all, that the exact thing they wanted me for was exactly the reason I wouldn’t have lasted in a big firm, which is that I was really entrepreneurial.”

Mr. Smith did his articling with Stikeman and it went well. They offered him a job, but after not all that much deliberation, he turned it down. He and Bryce Gracey, a cycling friend with whom he’d built titanium bikes of their own for a cross-country ride a few years before, had founded No. 22 by then, and it was then that Mr. Smith decided it was time to take the training wheels off their business.

I asked Mr. Smith how that conversation went with his parents, who’d watched their son devote four years of graduate education toward a legal and corporate career. I wondered out loud what their reaction was when he told them he’d turned down a job offer with Stikeman Elliott to start a bike company with no capital, no funding, no presales and which required significant startup investment in overhead and materials?

“I feel like I framed it differently,” Mr. Smith says, laughing. “No, actually, I loved working with Stikeman Elliott. They were great people and it was an amazing learning curve. But my parents were so supportive. They always have been. I mean … they probably would have preferred me to stay in law, but they were still behind me doing this.”

Mr. Smith’s parents probably also knew they only had themselves to blame for their son’s business bug (although Mr. Smith does maintain a bespoke one-person real estate law practice on the side). Both his parents are entrepreneurs who run their own businesses. Mr. Smith’s father operates a successful commercial printing business and his mother has her own interior design company.

I asked Mr. Smith what he thought his MBA gave him. “It’s funny,” Mr. Smith says. “I’m not sure I could have said exactly what my MBA did for me at the start. Some of those classes didn’t really land at the time, only because I had no experience. Things like hiring practices; I’d never hired anyone before. It felt very abstract. But now I look back and I see that it really gave me a lot of insight into certain things around running a business that I’ve now applied, things like organizational behaviour. It’s also been very valuable in planning processes, positioning the business, carving out a niche.”

Thinking about positioning the company has been taking on greater importance and complexity as No. 22 grows, given that the playing field of high-end cycling products is competitive at the international level and deep with multinationals spending freely in both research and marketing. The company and its nine employees make about 300 bikes a year.

Already, their bikes, which range in price from about $7,000 to $10,000, are viewed in a unique way by the cycling community — as objects of beauty that also happen to be beautiful to ride. This product differentiation is an achievement in its own right, but now that they have established the quality of their product, the question is how, or if, to scale up.

Their biggest transition to date came about four years ago, when they opened their own titanium-frame factory and, since then, the challenge has always been keeping up with demand. It’s a good problem to have, but addressing that problem might create others. Growing the business means hiring more people, buying more material, investing in more machinery, making more and bigger commitments. It also means moving into a stock bike program, instead of relying purely on orders for custom bikes. This means that if you make 100 extra bikes and no one buys them, the company is in trouble.

“2018 is a year of big change, no doubt,” Mr. Smith says. “It’s the classic chicken-and-egg thing. We’ve always tried to err on the side of setting ourselves up for growth. I’m sure we’ll continue that by maybe not paying ourselves as much now to make it easier to grow for tomorrow.”

As for where No. 22 goes from here, that’s hard for Mr. Smith to say. Certainly, he feels motivated to keep the wheels turning, as it were, given how sought-after the brand has become. “I don’t think I ever thought I’d own a bike company,” Mr. Smith says, “but for sure I always had the intention of starting a business. On the one hand, it’s great because it’s an area I’m really passionate about, and if I wasn’t doing No. 22, I’d probably spend the same amount of time thinking about bikes and obsessing over bikes. But on the other hand, it’s a challenging business because there is so much competition and so many passionate people. The bar is incredibly high. It’s hard to make it a profitable long-term business because so many other talented people are doing it.”

Mr. Smith knows No. 22 is something of a swing-for-the-fences business, in that it’s a passion project, but one with a strong product and a glittering brand. Sure, it might fizzle out one day, but it also has the potential to be a substantial market player at the level of an industry leader such as Moots Bicycles, out of Colorado. The reality, Mr. Smith says, is that although bicycles are a high-growth area, you can’t always be sure how good the pavement is going to be around the next corner, which is why he is staying focused on simply making one great bike after another.

The No. 22 brand is intimately tied to the quality of their bikes and “you can lose that in a month if you start to compromise quality for growth,” he says. No. 22 will never test that, Mr. Smith adds, because the quality of their name is ultimately all they have. And he knows life is a long ride. “I may not run No. 22 forever,” he says, “but I want to build it to last forever.” 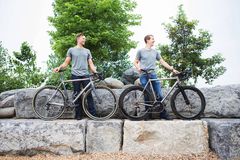