A $15-million gift from a private donor to McMaster University’s DeGroote School of Business, announced Friday, sets the stage for an ambitious redesign of undergraduate commerce education based on fostering close collaboration among students from multiple faculties.

The donation, to be spread over several years, comes from financier Paul McLean and his family and will be combined with funding from the Hamilton university and others to construct a $50-million, seven-storey building that is scheduled to open in 2022 to house undergraduate business education.

“The gift is a remarkable vote of confidence in what the [business] school is imagining business education should look like,” says Patrick Deane, McMaster’s outgoing president. He says the proposed curriculum is “potentially revolutionary” because business students and those from other faculties would work together on projects, not as a course add-on but as a defining feature of their respective programs.

For Mr. McLean, one of three generations who attended McMaster, what is being planned for inside the building was a major impetus for the donation.

“It was the idea of how the building was going to be used by the business [school], with multiple faculties studying together,” he says. “It was really about the collaboration of faculty.”

Mr. McLean, chief executive officer of CWB Maxium Financial, is a financier who specializes in the golf industry and is a former president of Golf Canada, the game’s governing body. He earned an undergraduate degree in statistics and computer science and later an MBA from McMaster where his father, Gordon, attended for two years before enlisting for the Second World War.

Mr. McLean says his belief in the value of interdisciplinary collaboration was forged through his own business experience and conversations with his daughter, Lauren, who earned an undergraduate McMaster degree in cultural studies and critical theory before graduating last year with a master of arts degree in gender studies and feminist research.

“One of the things I learned from my daughter is her viewpoint on things by studying English and the humanities is sometimes different from a more business capitalism attitude,” he says. DeGroote dean Len Waverman, who describes the building as “the vehicle for what we want to do,” says the changing nature of work is behind the push to embrace interdisciplinary education at a university already renowned for problem-based learning.

“When you think about the way the world is changing, it is beyond hype; and with artificial intelligence, it does change the nature of work and the nature of the occupations students go into,” he says.

At the same time, he adds, “everyone has similar ideas that our students have got to be creative, think outside of the box and be able to transform themselves, and we are all struggling about how to do that.”

With the revised curriculum, still under development but with some changes coming this fall, the dean says undergraduate commerce students would still have to go “deep” to demonstrate their grasp, for example, of finance, accounting and operations management.

In future, he says, “If you want to really build a future in finance, you had better be working with someone from computer science.”

Dr. Waverman says the revised curriculum aims to promote a mindset of inquiry in students to recognize the potential for multiple approaches to solving a problem. “You have got to move away from case [studies] that have a right answer,” he says. “The world is uncertain and our students are going to have to be able to work in this world of uncertainty where there is no known answer.”

In recognition of the interdisciplinary focus, Dr. Waverman says the word “business” does not even appear in the planned name of the new building, the McLean Centre for Collaborative Discovery.

Under current plans, each floor of the building would have a theme, such as innovation, where a “discovery” project would be carried out by a DeGroote student and at least two others from different faculties. The students would interact with professors from various faculties as well as corporate and other leaders invited to the campus.

“It is not about the business students per se, it is about students from across the campus who can work together,” he says.

As a donor, Mr. McLean says McMaster’s new approach to business education is on the right track.

“I think [the focus on] interdisciplinary is going to teach us how to team-build, how to work together and how to share ideas,” he says. “That is the whole idea of collaboration.” 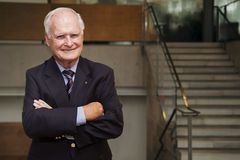