Five years ago, with oil prices pushing US$100 a barrel, undergraduates at the University of Calgary’s Schulich School of Engineering were heading straight from the classroom into lucrative oil patch jobs.

That all changed abruptly in 2015, when oil prices tanked. Postgrad employment rates then plunged, too, from well over 80 per cent for many disciplines to as low as 22 per cent for geomatics engineers and in the 40- to 50-per-cent range for chemical and civil engineers. But the lucky students still landing jobs weren’t necessarily those with the highest GPAs. They were often those able to work their soft skills: networking, relationship building, critical thinking.

Employment numbers have since recovered (although they haven’t hit preslump highs). But according to Jenny Cruickshank, Schulich associate director of student services, the crash marked the end of an era. “Four or five years ago, students thought they didn’t even need those soft skills,” she says. “But if you’ve seen a challenge in your economy, you’re looking at: 'What would differentiate me?’ Students here have definitely realized those skills are essential to success.”

That’s not unique to Alberta. Marie-José Beaudin is executive director of career services at McGill University’s Desautels Faculty of Management in Montreal. She’s drawing lessons not from five years in the past, but thinking five years into the future. “Students will be trying to get jobs that don’t even exist right now,” says Ms. Beaudin. “How do you equip them to see the next trend, to make their current skills and credentials relevant, when things change so fast?”

Both schools hope the answer can be found in part in a new partnership with Royal Bank of Canada called RBC Future Launch. Beginning on Sept. 17, the University of Calgary, McGill, and five other universities and colleges nationwide will participate in Phase One of the partnership. It will focus on a rollout of a made-in-Canada networking and mentoring platform called Ten Thousand Coffees.

Developed by Toronto-based marketer and entrepreneur Dave Wilkin and launched in 2014, Ten Thousand Coffees matches mentors and mentees based on career goals, interests and skills. The matched pairs meet over coffee, either in person or online. It has been adopted by more than 200 organizations internationally – including RBC, which uses it to foster networks across teams, departments and staff in different parts of the country.

“Ten years ago you could rely on a résumé,” says Mr. Wilkin. “Now the vast majority of jobs come from networking, not job boards or anything like that. Graduates need to have that network as quickly as possible.”

The platform connects established alumni, who have volunteered to act as mentors, with students and new grads. The connections will be made based on skills and career goals, and the platform will provide mentors and mentees guidance on how to have effective interactions.

The new program comes on the heels of Humans Wanted, a report put out by RBC this past March, claiming that up to a quarter of Canadian jobs will be heavily disrupted by automation over the next decade. It warned that Canadian students and universities are poorly equipped to handle that rapid disruption, stating that “too many of our colleges and universities are degree factories, where instructors focus on content knowledge, rather than skills development.”

The report urges students to develop soft skills, from critical thinking to intercultural fluency, relevant to a wide range of jobs. The goal is to improve the ease with which students can improve their “mobility potential” – or more bluntly, find new career paths if their old ones are disrupted out of existence.

Schools like McGill have gone big on the platform, with more than 1,000 alumni already signed up. That kind of scale is necessary, believes Mr. Wilkin. “Our goal is to have five to 15 people in someone’s knowledge network,” he says. “Every few months they get introduced to someone new, so over the course of a year or two, they build out that network.”

That effort can be especially critical for the international students that Canadian universities, which are increasingly competing for a shrinking pool of domestic students, rely upon.

That effort can be especially critical for the international students upon which Canadian universities rely as the pool of domestic students shrinks.

At Halifax’s Saint Mary’s University, more than 30 per cent of the student body is drawn from outside Canada. Many of those students, explains Malcolm Butler, vice-president of academic and research, want to stay in the city or country, but their personal networks are just about non-existent.

“It starts right at recruitment,” says Dr. Butler. “Students say, ‘I’m interested in subject X, but what jobs can I get?' That anxiety is very real, and it can be especially the case for first-generation students, and especially from their family, who want the student to be successful in their new home, and may never have been to university. They’re looking for stability.”

Saint Mary’s has implemented other strategies as well, including a strong focus on experiential learning and a new degree program in intercultural studies.

“The challenges students face now are much more unpredictable,” says Dr. Butler. “It can be scary when you’re still a student. You hear about the gig economy, and that fluidity, that almost chaos. The question is: Do students view that as an opportunity, or as a risk? It’s our job to help them see it as an opportunity.”

Networking opportunities percolate over a cup of coffee
January 5, 2018 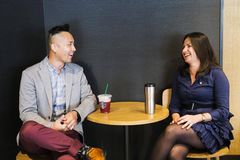