The largest single donation in the history of the University of Guelph, announced Wednesday afternoon, paves the way for new student scholarships and travel grants, academic chairs and expanded programming in its business faculty.

Accordingly, the business faculty, recently upgraded from college status by the university, has been renamed the Gordon S. Lang School of Business and Economics.

Mr. Lang said he and his wife, through their Angel Gabriel Foundation, wanted to recognize his father, who had piloted the family-owned business, initially a Toronto-based lamp maker, into CCL Industries, the largest label company in the world.

The size and scope of the gift – the latest of several major private donations to Canadian business schools in recent months – will be felt across campus, predicts business and economics dean Julia Christensen Hughes, who wraps up 10 years in her position in June.

“The impact is going to be absolutely phenomenal and in multiple domains,” she says. “To have the name of such a successful Canadian business leader who took this Toronto-based company and made it into a global-leading enterprise – to have that name stand with ours is priceless.”

The gift, expected to be dispersed over a decade, includes $8-million for four new chairs, named for the late Mr. Lang, in finance, marketing, leadership and sports leadership, all of which will include themes of sustainability and corporate social responsibility, according to the dean.

Mr. Lang says “a business school rises and falls on its faculty. If you have a world-recognized faculty with researchers and writers, hopefully this [donation] will be a spark for that.”

An estimated $5.5-million goes to undergraduate and graduate scholarships, including funds for expanded student participation in academic competitions and international co-op placements.

A special “Lang fund” of about $3-million has been set aside for teaching and learning, including experiential learning opportunities that enable off-campus travel by students working on for-credit consulting projects.

“This is the first time we have a dedicated fund ... to support our commitment to our vision for leaders of a sustainable world,” says Dr. Christensen Hughes.

Of the remaining funds, $2-million will pay for the design and landscaping of a new Lang plaza outside MacDonald Hall, the former women’s residence renovated in 2016 to house what was then called the college of business and economics.

“We wanted a beautiful space for students to gather,” says the dean, with the plaza seen as complementing school plans for added summertime offerings of executive education (for working professionals) and student co-op education placements.

Prior to Wednesday’s announcement, the Langs already were major donors to Guelph, providing funds for a sports pavilion in 2017, new student humanitarian scholarships, and upgraded facilities at the university’s Ontario Veterinary College.

As Guelph was one of the few remaining universities in Canada without a named business school, Mr. Lang says he saw an opportunity to recognize his late father.

“I wanted to thank him for all he had done and to provide some form of recognition for what he had accomplished,” says Mr. Lang, who spent 25 years with CCL Industries himself before retiring in 2005. He credits his father with the company’s transformation into a global enterprise.

“He was an entrepreneurial businessman and he always talked about what became CCL Industries,” says Mr. Lang. “It was the love of his life outside of golf.”

The roots of the latest Lang donation dates to 2014 when Stu Lang, who played with the Edmonton Eskimos for eight years in the 1970s and 1980s (winning five Grey Cups), coached the University of Guelph’s Gryphons football team from 2010 through 2015.

Initially a volunteer receiver’s coach in 2009, he was hired the following year as head coach, leading the Gryphons in 2015 to win the Yates Cup, the Ontario football championship that he had won decades earlier as an undergraduate player at Queen’s University in Kingston.

In 2014, in his head coach role at Guelph, Mr. Lang sought advice from Dr. Christensen Hughes on a professor who could help modernize coaching practices for the team. She volunteered herself, given her own work in executive and faculty coaching. From that collaboration, the two stayed in touch on issues related to the business school.

She credits Mr. Lang for suggesting a new program in sports leadership and for his financial support to create a resilience award that honours a student who overcomes personal difficulties to assist others.

“He is a very caring individual and believes passionately in the power of education,” says the dean.

“Whether or not they [donors] are looking to name a business school or looking at a meaningful investment in a business school, they really want to look at being able to see what the impact of their gift is going to be,” says Michael Logue, partner with KCI, fundraising consultants to the non-profit sector.

“Donors don’t fund needs,” he says. “They fund vision – something they can feel passionate about.”

Both the Lang gift to Guelph and the donation last month to Saint Mary’s from members of the Sobey family, The Sobey Foundation and Sobeys Inc., for example, include aid for scholarships, new academic chairs and enhanced programming to raise the profile of the universities’ respective business schools.

By contrast, a $15-million gift by financier Paul McLean and his family last January will support an ambitious redesign of undergraduate commerce education at McMaster’s DeGroote, with the donor’s funds contributing to construction of a $50-million, seven-storey building to open in 2022 for the commerce program.

Mr. Logue points to an emerging “design build” relationship between donors and institutions that seek to match their respective interests and priorities. “It is not chequebook philanthropic transactional [in nature]," he says. “It is very much a collaborative partnership.”

“Whether it is large gifts to a business school or putting a name on a hospital wing or whether creating a family foundation or a family trust inside a community foundation, those [legacy gifts] are going to be on the rise for the next decade,” he says.

Last year, an analysis of charitable giving by Imagine Canada and the Rideau Hall Foundation found that baby boomers have been responsible for more than 40 per cent of donations since 2000.

For the Guelph gift, Mr. Lang says he thought hard about a legacy donation that would include naming a school for his father, whom he described as “very humble.”

Imagining a conversation with his late father, Mr. Lang says “he would be uncomfortable but would be very proud, knowing that his son loved him." 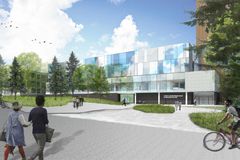 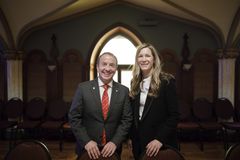 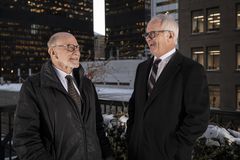