Michael, 52, worked at the same airline for almost three decades. He progressed from being the lead member of the cabin crew to developing training programs, supervising staff and creating work schedules. In March, 2020, he was furloughed from his company and is unlikely to be called back, so he has been searching for a new job since then. While he was able to land two interviews, they were unsuccessful.

The majority of his work experience has been in the airline industry, and his most recent job role had him executing a range of administrative and HR tasks. He hopes to use these skills to find a suitable role outside of travel. “Most of my career experience has been on the administrative, people management and training sides of this sector,” Michael writes. “There is much more to the business than coffee and tea.”

Michael enjoyed the fast-paced nature of his previous work, along with the perk of travelling. But being away from home so often has made it difficult for him to forge professional relationships locally and to network. He’s also worried about his résumé being too airline-focused. Michael would like his next position to be with an established company where he can expand his professional training and have opportunities to advance.

We reached out to Toronto-based career coach Jen Narayan and Andrea Bartlett, director of people operations at Toronto HR software company Humi, to review Michael’s résumé and offer their advice for his next steps.

Ms. Narayan likes Michael’s clear and concise résumé, and that it fits onto one page. While Michael is still homing in on his specific career goal, Ms. Narayan advises him to add a career tagline under his name once he has decided, or when he has found a job he’d like to apply for. She suggests a tagline of “Senior Administrative and Customer Service Professional” could work well for his experiences and goals. “His professional summary could also be more specific to help understand what his focus is,” she says.

Michael can further specify his résumé by referencing common terms used in job descriptions that he’d like to apply for. “Incorporate as many buzzwords as possible from the descriptions into his résumé,” she says. “This way, he can be ranked higher by the bots when he applies through applicant tracking services.” The list of Michael’s technical proficiencies can also be tailored further to target the role he’s aiming for, based on the skills listed in his target job descriptions.

Ms. Narayan also recommends adding some colour to subtitles or job titles in the résumé. “Pick one other colour and use that as a secondary colour,” explains Ms. Narayan. She says his LinkedIn profile is lacking, but that it would be beneficial to add a link to it on his résumé if he worked on improving it.

Ms. Bartlett finds Michael’s résumé easy to read with a simple, standard layout. But, like Ms. Narayan, she thinks that his professional summary could be improved. “The summary statement is a good opportunity to talk about the things that inspire you, what you are looking for in a job, why you want to get into an industry,” Ms. Bartlett explains. “In Michael’s case, think: why HR?” She recommends that Michael use his summary to highlight one or two key skills, then offer a reason for why he’s pivoting careers.

Michael has had an impressive progression in his tenure within the airline over the years. So Ms. Bartlett encourages Michael to highlight and outline this progression in a clearer manner. “HR managers should be able to scan a résumé and see the applicant’s career development in their past roles and acknowledge the person is capable of growth,” she explains. “The dates that correspond to the role change need to be identified.”

Ms. Bartlett also suggests Michael add a bit of personality to his résumé. “One area of the résumé that’s often overlooked by applicants is the ‘about me’ section,” she says. “I love to see an area on hobbies or passion projects. This is an opportunity for the candidate to express their personal interests and highlight any relevant information about them to stand out.” She believes this helps interviewers and hiring managers to have a holistic view of what an applicant is like as a person.

Based on Michael’s work history, Ms. Bartlett recommends that he search for roles like HR co-ordinator, HR generalist and recruiting specialist. He may also want to consider further education. “Given he doesn’t list any legal training or knowledge, he would need to upskill his employment standards knowledge through courses offered by the Human Resources Professional Association,” Ms. Bartlett explains.

Michael has adopted a new résumé format that incorporates pops of colour in its border and section headings. He has revamped his professional summary to include more information specific to his goal of finding a new job in HR, highlighting key skills, phrases and buzzwords relevant to the industry. Michael has also reformatted the work experience section for his airline jobs to show a better progression of his roles, including dates. He has also elaborated on his bullet points to incorporate more HR-specific tasks and responsibilities that would be relevant to a future role in human resources.

Email us with your résumé at globecareers@globeandmail.com with ‘Résumé Review’ in the subject line and we’ll ask a career coach and an expert in your field to provide their feedback. E-mails without the correct subject line may not be answered. Names and some details are changed to protect the privacy of the persons profiled. If you’re a hiring manager interested in reaching out to the person profiled, we encourage you to contact us. You can find all our résumé reviews here. 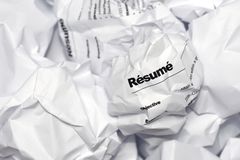 After a pandemic-era departure, this claims adjuster is looking for her next job
Subscriber content
June 2, 2021

The former managing director of a medical cannabis company is looking for his next role
May 19, 2021