You’ve been told again and again that meeting the right people is key to achieving the job you want, but what you may not realize is just how much you could be getting in your own way.

That’s because the biggest obstacle for students and recent grads to meet the people they need to know to jump-start their careers isn’t a lack of interest from potential mentors or contacts, but a series of mental blocks that prevent them from reaching out.

When you also consider that while business leaders think the next generation of job seekers has a good network already in place, it becomes pretty clear that these barriers are ones you can’t afford to overlook – especially when our research shows that 90 to 95 per cent of students and recent grads have zero to two people in their network they can rely on for career conversations. Until democratized networking is fixed, nepotism will continue to drive the job market.

It’s awkward to start a conversation

It can be hard to approach people you don’t know, even if it’s through something as simple as an e-mail. Many people will reach out once, and take a lack of response and a rejection. You assume the people you want to meet are busy, you worry about what to say and whether you’re prepared. Those are normal fears, but they’re also just assumptions. And given the disconnect between emerging job seekers’ need to connect and the mistaken belief by industry leaders that these networks are already robust, it’s key for students and recent grads to take the first step.

The solution: To beat this hidden paralyzer, you need to be persistent. Don’t let the awkwardness or initially slow response hold you back. It typically takes three to five e-mails to get a time and a place to meet, because the people you want to meet are busy and it’s up to you to follow up. But each outreach e-mail is also an opportunity to build a relationship by including interesting articles you’ve read about your common field, or an update of something you’ve been working on. What may feel like a rejection isn’t a rejection as much as a “not now.” Keep that person warm because you’re probably going to cross paths with them again.

In an increasingly polarized world, already awkward conversations are being made even more difficult by divisive language and a fear of difference. It’s hard enough to figure out what to talk about with a stranger, but when you add in fears around how someone from a different gender, culture or background may misinterpret an interaction, a typically moderate worry can become overwhelming. But in a country like Canada, there are going to be more people who are different than you than they are similar, and you need to meet and interact with a variety of people to be successful.

The solution: The fix here is simple – focus on your goal and ignore all the noise. Approach people as professionals only, be prepared, treat them with respect, and they will respond in kind. Focus on the things you do have in common, and if you hope to make an ask, think about the best way to phrase it and the best time to bring it up.

We’re too far away to meet

Job seekers often think potential contacts won’t be interested in meeting with them unless they’re in the same city. But while geography may be a consideration when it comes to actually getting a job, it isn’t as relevant when it comes to networking. What’s more, you should be meeting people to learn, explore and build your network, not to ask for a job, so there’s no harm in reaching out to people you admire or think could have useful advice about next steps, even if they’re in a different part of the country. If you take too narrow a view, you may miss out on valuable connections.

The solution: Get off your e-mail or LinkedIn messages and connect though other forms of technology. Jump on a phone call, or better yet, use Skype, FaceTime or Google Hangouts to interact, at a distance, as you would in person. Just remember to treat this virtual conversation with as much respect as you would an in-person one: dress the part, take care of the workspace your new contact will see in the background, and prepare as much as you would if you were meeting face to face.

Opinion
Who should be stepping up as mentors? Maybe it’s not who we think
December 20, 2019 Opinion
A piece of advice for new grads: Networking doesn’t have to be intimidating
November 20, 2019 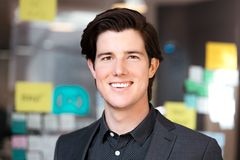