In the past year, a number of senior executives of large public companies, including CEOs, have been fired or forced to resign for sexual harassment or misconduct.

Last year, Google said that 48 of its employees had been terminated in the previous two years for sexual misconduct. The CEOs of Barnes & Noble and Warner Bros. were in the news for similar incidents. The latest is the CEO of McDonald’s, who resigned last month over an affair with an employee. While the relationship was consensual, the company’s board said this violated company policies and demonstrated poor judgment.

The board opted to terminate without cause and, while the CEO will receive 26 weeks of severance and pro-rated bonuses, the romance cost the man his job and his annual salary of US$16-million.

This is an interesting case because the CEO didn’t lose his job for poor performance, at least as far as the numbers are concerned. In fact, he had delivered solid financial numbers resulting in company shares roughly doubling in value since he took over. He was also credited with many innovative non-financial achievements.

Few people will feel sorry for an executive who receives such a handsome severance, a pro-rated bonus and, on top of all that, still gets to keep his stock options. Still, it is sad to see capable and smart executives make such egregious errors to the point where they must leave.

What can we learn from this story? Here are two key points.

The first lesson concerns the company’s board and how swiftly it decided to terminate him. It was also prepared with succession planning. The removal of the CEO required several moves of senior executives; the executive in charge of North America had to move into the CEO position and onto the board, the executive in charge of international operations had to take charge of North America and the senior international position also had to be filled.

Also, an effective communication campaign was promptly orchestrated both within the company and publicly. McDonald’s employs more than 375,000 people. It has more than 38,000 locations in 100 countries and its market capitalization is more than US$130-billion. These numbers give you a perspective for the size of this “ship” and it’s certainly no rowboat; think more along the lines of a big tanker or cruise ship. But my point is the board had its act together.

The second lesson from this story is about why it happened and how to avoid such an outcome in the future.

I enjoyed a career of more than 23 years leading four companies in Italy, Brazil, France and Canada for a multimillion-dollar global organization. I have also had a second career, again more than 23 years, as a management consultant. These careers taught me how to avoid falling – pardon the pun – into the “wrong bed,” and any senior executive or manager who is leading a company or department should pay heed.

The fact is temptations are part of life and all of us get tempted one way or another. We are tempted to lie, to steal, to envy, to be jealous and to get romantic. The key is to take a stand before the temptation presents itself.

Indeed, if you wait to decide what to do only when you are tempted, you assume high risk because emotions may take over the brain. It’s a far better idea to set personal guidelines for how you will handle social situations ahead of time. This might include a policy about one-on-one meals or driving somebody home after hours. Remember, there is always Uber. So think of guardrails on a highway. They were installed to prevent accidents. People need guardrails, too.

Also remember that this doesn’t apply only to men. They apply to anyone. While no guideline is bulletproof, it will mitigate the risk and provide good protection in serving as your guardrail. 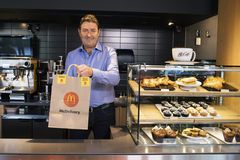