Brenda Hebb Trenowden, 51, of Halifax, is London-based head of ANZ Bank’s Financial Institutions (Europe), and global chair of the 30% Club, an organization campaigning for greater representation of women on boards and in management.

When back in Halifax one summer, we went through boxes. We had school books [in which} you’d write down classes and tick job boxes – for boys: firefighter, doctor; for girls: nurse, teacher. Cringe-making. I’d written in, librarian or a singer.

Until university, I thought maybe [I’d be a] lawyer. I saw a Queen’s [University] presentation in high school. A family friend said I should go, suggesting business. I did an honours Commerce degree, the first in my family to go to university. By my second year, I quite liked business, and thought I could have a good career.

I joined AIESEC, this fantastic international business club. I had many roles – president, by my final year. After graduating, I went with IBM Hong Kong for a year’s internship. I borrowed money from my grandmother for my flight. It was mind-blowing, 1989, just after Tiananmen Square. I came back to Toronto to settle in for the rest of my life, get a job, pay off student loans. A bit dull after Hong Kong. I thought: “I want to see and do more.”

A friend in London sent a ticket to visit. I got a job, knowing nothing about equities. Thought I’d stay two years. That led to an emerging market equities job [with Citicorp]. I travelled all over, developing my love of international business and travel, [seeing] very few women in corporate leadership, much less on boards.

You went along with macho culture – swearing, inappropriate jokes – or were alienated. I didn’t think about gender diversity then. I went to India, Pakistan, Sri Lanka and other emerging markets; in Bangladesh two years. It was so poor, shocking differences between women and men. You’d see women in factories sewing, paid by the piece, men sitting in chairs overseeing.

I hate to say it this way but I can work like the men. We’d decided to follow my job. When we had kids, we decided my career was more lucrative so he decided to stay home. Supportive husbands make a big difference. I’ve been able to not worry about leaving to get the kids, travel. He’s absolutely devoted to them and looking after all of us – not an easy job.

Since 2015, I’ve been global chair of the 30% Club {an organization campaigning for greater representation of women on boards and in management.] We’ve reached 30.9 per cent. My emphasis has been more on executive roles, C-suite, the pipeline levels below. Real change comes from within. It’s vital CEOs take responsibility for hiring more diverse candidates, promoting women with better balance and inclusive cultures. Often a board’s responsible but a CEO sets the tone and what behaviours and traits everyone should exhibit. The Canadian club has an investor group of the largest pension funds and asset managers reviewing companies with few or no women on boards to constructively engage as shareholders, encouraging gender balance for performance and governance.

I was exercising and eating well but had a distended tummy, I assumed middle age, having had a C-section. At a 360-medical, I had a pap smear. My uterus seemed enlarged so I had an ultrasound. They found a lot of fluid, all kinds of tumours. Pseudomyxoma peritonei is rare, doesn’t present; often found too late. I advocate for smears [otherwise] they wouldn’t have found the cancer.

I wanted to be normal, as much as possible [telling my office], ‘It will help if I carry on,’ put on that brave face. People forgot I was having horrible side effects, a little harsh sometimes, expecting more of me. I wore a pump in a crossbody bag to go about my routine, and did presentations on the Gender Pay Gap reporting deadline and did media while getting chemo. There were days going to work I’d get sick and crawl back into bed. Having a strong sense of purpose and looking forward fuels my resilience. Obviously family, friends, my dog, [also] the club’s campaign. If I go through it again, likely at some point, I hope I tackle it the same way.

Thinking it was a tax bill, my husband opened a letter to me, calling me at work. He could barely speak, “Letter, award, recommended to Queen!” I was to get a Commander of the British Empire. Given my dedication to gender balance, I was also ranked top role model in 2018’s Financial Times & HERoes 100 Female Executives. I enjoy cricket and watched a lot: In Bangladesh, the only channel we got – I’m sure my husband rigged it – was cricket. A Sport England rule [specifies] all sporting boards have gender diversity: England and Wales Cricket Board wanted finance and governance expertise so I was headhunted. For my obsessed husband and son, that was the ultimate.

My mum is an absolute rock. When I was ill, she came over. She’s been a role model my whole life; her unconditional love and support makes me who I am. Every year we count our trip to Canada by how many times we get to Hubbard’s Farmer’s Market. We used to fly into Halifax on Saturdays, now we get in Friday afternoon. The kids go to Dairy Queen with mum. Saturday morning at the market – we’ve really arrived.

Editor’s note: This is one of a series of stories being published in Report on Business/Careers, during the week of International Women’s Day.

Eytan Bensoussan: ‘I wanted to use the forces of capitalism to improve the lives of people around me'
Subscriber content
February 24, 2019 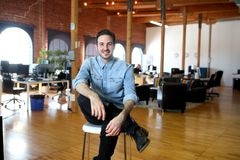 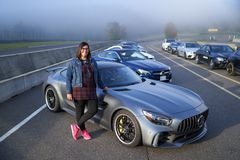 Esther De Wolde: ‘We sell screen doors. We’re not curing cancer. So we need to have fun’
Subscriber content
February 3, 2019 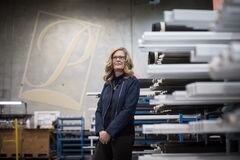