Miriam Tuerk, 58, is co-founder and CEO of Clear Blue Technologies International Inc., which has installed almost 4,000 solar and other off-grid power systems in 37 countries.

You’re just back from Africa and Europe.

Yes, South Africa’s AfricaCom conference, then meeting with investors. You can’t understand how important lighting is in Africa; as a continent, it’s dark. You can’t even go into the middle of an Ontario lake at night and find complete darkness.

I was very good in maths and sciences, bad in English. My pet peeve is this notion that math is hard. I wanted a degree and that was very clear, my parents being immigrants. My father graduated in 1965, [I was] second-generation from the same University of Waterloo program in 1985. I didn’t want to just do physics or math, so I mixed in co-op for jobs to pay for university. I got great experience – a Northern Ontario mine, Department of National Defence, General Motors, construction. If I’d been male, I wouldn’t have had to work half as hard.

Your family emigrated from Germany?

[Separately] in the fifties. They built everything, including bathrooms, kitchens. At three years old, I knew the difference between Phillips and Robertson screwdrivers. My grandfather founded Kitchener-Waterloo’s Oktoberfest in 1967; I’m probably the only person in the world who cries when I hear people sing Ein Prosit.

In 2005, I was CEO of an early-stage company presenting to a fund at one of the world’s top companies. “Where’s the CEO?” asked the guy. “I’m [the] CEO.” He said: "Get out of here. Get out.” The past five to 10 years, being a female CEO is a bit more positive, although it’s still hard to raise money and be appointed to boards. It’s a huge edge to be a Canadian company. Not just gender, but we have great diversity and a better culture with a great mix of nationalities, which is one of our biggest assets. Then there’s support; when our kids were younger, my co-founder husband – who had the vision for Clear Blue – quit for a few years, which was good for our family.

Exports are 90 per cent of your business, wireless power the base of revenue?

Yes, we’re the first and only company providing reliable off-grid power disconnected from grids. This year’s fourth quarter will be our strongest quarter ever. Wireless is the revolution the world’s moving to. We bring connectivity to parts of the world that don’t have it. We’re bringing the next billion people onto the internet who’ll come out of poverty. As a kid, we had one landline and half the world didn’t have phones. Now, there’s four in our house. We’ll still have landlines, but using that concept, wireless power has a huge infrastructure impact. We’ll still have grids, but cabling streets or bringing power 20 miles is going away. The problem is, you don’t want power to be like solar garden lights, working for two months. We’re the secret sauce: Key foundational technology that’s cheaper from Day 1. We focus on critical infrastructure – security cameras, Wi-Fi hotspots, gunshot trackers, motion detectors, environmental sensors, railroad switching, pipeline sensors – all run by computers the size of a tissue box.

Then there are traditional systems and wildfires.

We studied California’s wildfires. Transmission and distribution grids are big, expensive and slow moving. In our project with Eckville, Alta., if the grid goes off, streetlights stay on. It has the ability in emergencies like fires to power cell towers for a few days. That’s hugely valuable. When Toronto’s power went off, telecommunications went down. For resilient infrastructure, independent power is needed. Also, trenching, piping and construction’s carbon impacts are eliminated.

You’re working at least eight hours a day. Do something you like and don’t waste that big part of your life. I wanted to make money – not to be rich – but enough for options. And, I’m quoting [the sci-fi movie] Galaxy Quest: “Never give up, never surrender.” After you’ve climbed your first mountain, you can climb more mountains. I don’t think I’m smarter or better than others; I’ve got some great skills, but one thing, I don’t give up.

Do you have a favourite age?

I’d go back to 42. Not my 20s, when I’d tell myself to like myself and be confident a lot faster than it took. Time seems to go fast because humans measure time as a percentage of life, so at age 10 it takes forever to turn 11 because it’s 10 per cent of life. But at 50, in no time you’re 51. I’d like to slow it down and have plenty more years.

Opinion
How a Canadian cleantech firm is bridging the digital divide in Africa
Subscriber content
December 9, 2018 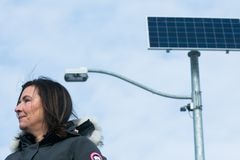