Influencers are a new job category, spawned by the digital world. So history doesn’t make this a uniquely female or male job, with wage disparities between the genders from the past. Yet it’s another job where men are paid more than women, according to a recent study of Instagram influencers from over 40 countries, pulling in 7 per cent more than their female counterparts for promotions in posts.

Consultants Natacha Catalino and Kirstan Marnane spent a decade working on McKinsey’s Remarkable Women Program, developing promising female leaders around the globe. They say one of the overlooked benefits of the program is that it holds up a mirror to the organization. And the result is not always appealing.

After interviewing 150 participants, they found women and men experience work quite differently – and it’s the system, not the women, that needs fixing. Most of the women said their organization defined leadership clearly but the benchmark was the stereotypically masculine style. Interestingly, some women said their organization expressed appreciation for other leadership characteristics, such as listening and collaboration, but in the end promotions were on the basis of the more traditional leadership behaviours associated with men.

“These dynamics are problematic for organizations, not just for women. McKinsey research into the leadership behaviours that are most effective for addressing future challenges concludes that the traditional behaviours of control, corrective action and individualistic decision making are the least critical for future success. Much more important are intellectual stimulation (which men and women apply in equal measure), and five other traits (inspiration, participative decision making, setting expectations and rewards, people development and role modelling) applied more frequently by women,” they write on the McKinsey website.

They found women hesitant or unwilling to share with employers the barriers they face at work, wanting to avoid being characterized as weak or complainers. Leaders must therefore listen more closely to women and demonstrate through their actions they respect the feedback they get.

My pessimism leads me to not expect much to change in the future. But Melinda Gates is far more optimistic. She argues in Harvard Business Review that gender equality is within reach: “We’ve never had a chance like this before.”

She lays out a three-pronged program developed by Pivotal Ventures, the investment and incubation company she founded in 2015, which tries to drive social progress for women and families in the United States:

This can’t be left to just women. Inside and outside the workplace, men have to join the struggle for change. Far too often, advancement and equality of women have been seen by men as a zero-sum game – and they lose. But it’s our companies and our society (and yes, our wives and daughters) who benefit.

Gender consultant Avivah Wittenberg-Cox, a Canadian working in Britain, warns however against calling men who help out “champions.” That’s embarrassing for the men and for the women, rewarding good male behaviour with female admiration and applause. “Rather than making male support for gender balance the exception, the goal is to make it the norm,” she writes in Harvard Business Review. And that will only come by putting the focus on how gender balance delivers better performance and returns. Understanding the differences between isolation and loneliness at work
Subscriber content
February 19, 2020 My company made me attend workshops, but I was still demoted. Can I hold the organizers accountable?
Subscriber content
February 17, 2020 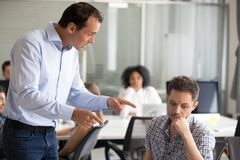