We work increasingly in teams. You belong to them. You probably form some teams to tackle short-term issues alongside peers, or with people reporting to you. Let’s look at how they can work better.

First, banish the notion that equality within the team is paramount. Research on NBA teams between 1997 and 2007 led by Stanford Graduate School of Business acting assistant professor of business Nir Halevy found that hierarchies lead to better team performance. Teams with a wider dispersion of salary and playing times – signals of hierarchy – tended to win more games than more egalitarian teams. As well, intragroup co-ordination and co-operation was better, as evidenced by assist statistics.

Basketball teams are not that far removed from those in your workplace, since both require high levels of co-ordination to be successful. Bryant University management professor Michael Roberto points to this year’s Boston Celtics, who entered the season with high expectations but have struggled. One reason seems to be that they have too flat a structure.

“Knowing who the star is and who the role players are can be important in certain kinds of teams," he writes on his blog. "Clear roles and responsibilities are very important for a team to excel.

"An adjustment period is clearly needed when you are trying to integrate new members or re-integrate former members who are returning to a team. It’s not just about putting together the most highly talented set of individuals. It’s about figuring how they fit together, and helping each member understand how they fit with their fellow team members. Getting people to buy into their role is a key job for a coach and for any team leader.”

Consultant Jon Gordon adds a different perspective. He writes that teamwork, at its core, means that sometimes you are the star and sometimes you help the star. If you want to be truly great, you have to work as hard to be a great teammate as you do to be a great player.

Mr. Gordon stresses that your team doesn’t care if you’re a superstar. They care that you’re a super team member. To do that, you must control your attitude, effort and actions every day. “It doesn’t matter what is happening around you and who you think is being unfair. Every day, you can focus on being positive, working hard and making others around you better. If you do that, great things will happen. One person can’t make a team but one person can break a team,” he writes on his blog.

Mr. Roberto alludes to the stages the Celtics are going through to become effective as a team. Teams go through five stages, according to research by Bruce Tuckman on group dynamics.

If you’re leading the team, Mr. Rockwell says you have four concerns: Monitoring team interactions, maximizing everyone’s strengths, bringing up issues others might avoid and delivering great results through others.

Do people in your company challenge the status quo?
Subscriber content
December 1, 2018

How to improve your video conferences
Subscriber content
November 29, 2018 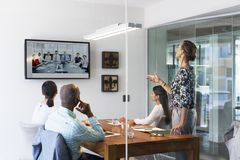 Five traps that will sabotage your presentation to executives
Subscriber content
November 22, 2018 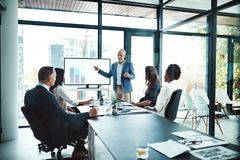