John Fox, 51, is a commercial real estate lawyer representing non-profits and for-profits with a focus on affordable housing in building communities. He is a partner at Robins Appleby, based in Toronto.

How did your interest in housing start?

My parents had public-service careers, which is why I always engaged in things resulting in big impacts. I was interested in real estate because what we build affects how we interact – and I liked seeing the product of my work. I was to speak at an infrastructure summit after Regent Park’s redevelopment speech. From that moment, I wanted to be part of it and applied for a job as in-house counsel at Toronto Community Housing Corp. dealing with its corporate matters – “public” housing where 9​​3 per cent of tenants have subsidized rent. I didn’t get it, but they created a job for me as a lawyer to concentrate solely on redevelopment issues, in revitalizing Regent Park.

How was Regent Park’s redevelopment a social-housing game changer?

For me, that will always be about the tenants. They put up with construction and got moved around so, without their support, much of it wouldn’t have happened. Some people called Oak Street’s removal radical – I call it deradicalization as putting in streets isn’t radical. I was on the board of the Daily Bread Food Bank for eight years, two as its chair. The food bank was a big part of the push to separate the child portion of welfare from parents, allowing a parent to get a job without endangering their ability to support the child. If you were on welfare and got a job, it was the highest tax rate in Canada, every dollar made taxed back, a deterrent to returning to work. Services to both TCHC tenants and owners are the arts and cultural centre, pool, playing fields separated from the park. It’s greater than the sum of its units.

You grew up where, had early jobs?

I was born in Montreal, grew up in Ottawa, spending half my high-school years in each. I’m bilingual and speak Spanish, only in the present tense. My first paying job was a summer day camp counsellor at $3 an hour. A lot of kids were from subsidized families and I babysat, so I saw how they lived. And, you’re talking to the worst Bell Canada installer, ever. The first person to tell me I should be a lawyer was my boss, after I botched a job.

Was your McGill University undergrad pivotal?

Yeah, I had a couple of excellent professors who deeply influenced my thinking. I was very active in student politics fighting tuition fees and for better funding for universities – those themes continue today. The first time I thought of real estate law – I think they couldn’t find somebody else – I was invited to Montreal’s chief planner’s reception with two other student leaders. It’s amazing when cities are being redeveloped – to put paper over a map, play with what could be there. Then my legal career involved stops in different firms.

How has housing commodification with short-term rentals such as Airbnb changed the market?

Any time you reduce housing with price pressures, we see regulation coming into play and pressure on governments to act. I see changes in the way the non-profit as well as the for-profit sectors are looking at housing. What’s interesting in my practice is I represent both non-profit and private developers. I see co-housing living arrangements entering into play and pressure for more units in yellowbelt neighbourhoods, which established neighbourhoods resist. We can handle more people. We can’t handle many more cars. Connecting parking allotments to affordability tells [everyone] it’s going to cost less to build. That’s great, if you attract people without cars.

That ties into land value taxation, and as the highest and best use of small business’s building could be a condo tower, so a business suffers.

Sure. I also think we have to get over limiting height where it can be accommodated. If planners put 10 storeys on and the compromise is six, that’s four stories of homes that ought to have been built. When we give up density, that’s a problem. In public developments, the returns to public entities for taxpayers are reduced. One difficulty is nobody speaks for people who don’t own homes. We have big wait lists for [non-profit] housing, but we have a lot of people not on lists, not able to purchase homes. They don’t show up in statistics.

I love long walks, hiking, involving things at the end like good meals.

“Let your brain be your heart’s soldier” (Po Bronson). Professionally, I very much like what I do. Leaving a law firm for Toronto Housing was using my skills to do something I thought was right. People would ask my kids what I did; they didn’t say “lawyer” anymore: “He builds houses.” Days are numbered for trees in Toronto’s Regent Park
October 15, 2019 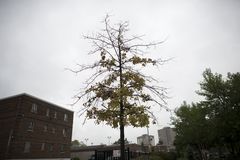