I grew up in Toronto. I’m an only child. My father left my mother when I was very young. My grandmother raised me. We had financial challenges, addiction issues in the home, and my mom was in a violent relationship growing up.

I never heard the word “entrepreneurial” growing up. It wasn’t something I was taught. From a young age, I was entrepreneurial. I started my first business at 10. I started walking dogs in my community.

I wasn’t traditionally school-smart. I was emotionally intelligent. I was an ideas person. I was a problem solver because I faced many problems early on in my life that I had to solve.

By 15, I was out of school – flunked out, kicked out, however you want to phrase it – I was out. I was trying to find my place in the world by hanging out with kids who felt broken like me. I started to dabble with drugs and alcohol quite heavily.

Things changed the moment I caught my reflection of my own eyes in the mirror after a night of heavy drug use and people passed out around the apartment. I woke up and I took a longer glance at myself and there was a hollowness in me. There was a vacancy in my eyes. I knew deep in my heart this was not my calling. I ran out of the apartment sobbing. My life was a mess. I knew I was on the road to repeat a cycle.

I wanted to make a change. I realized I’m not going to change the cycle unless I have an education. … I went back to school. I was the first person in my family to go to university.

I remember my first day on the job as an entry-level event co-ordinator at the Economic Club of Canada in May, 2008. We were hosting Bill Clinton. I don’t know what or why I was one of the fortunate few who ended up here instead of there – which was continuing with alcohol. I had so many friends who overdosed, who were in and out of jail, who were murdered. And here I am in a room with Bill Clinton, one of the most iconic political figures in the world. I thought I’m going to do everything in my possible being to be the best event co-ordinator this organization has ever seen. I don’t care if I have to pick up chicken off the floor. I will do it with a smile. I will proudly represent this organization. That was the attitude I took.

If you told me 10 years later I was going to be the owner, president and CEO of this organization, I wouldn’t have been able to handle it in my mind. In my heart, it was big enough to dream.

People will accept you in positions where you look the part. I looked like an entry-level event co-ordinator. I don’t look like the CEO. As an event co-ordinator, people were fine with me. I found myself in very important rooms, and I knew what my place was. It was changing from that place, literally against the wall of the room, to sitting at the table.

I had all the confidence in the world when I was jumping the ranks in the organization. But when I became president, I lost every single ounce of my confidence. I was shell-shocked. All of a sudden I was responding to other people’s perceptions and biases toward me not being right for the role. I started seeing myself through their eyes and I started to absorb that. It rocked me very aggressively for the first couple of years.

I tried my very best to play a role. I was acting because I didn’t believe in myself. It took time for me to change my own mind. When we find ourselves as women in places that traditionally we aren’t seen in, we have to change our mind about that. I had to understand this is progress at its finest. Walking into this room, being the only woman and having to convince everybody in this room why I’m here, is an honour and a privilege. And I accept the challenge.

I have to be real and true. If that’s not good enough, so be it. Once I made peace with myself and I stopped pretending to be somebody else, things started to shift. I earned so much more respect than when I was trying to play a role.

I took over the position of president and CEO two weeks before I had Luke, my first child. It was a hard time. I was trying to pretend I wasn’t a new mom who was scared out of my mind. I had to navigate through that.

It was impossible for me to understand why I would be at the helm of this organization. Now, I am so acutely aware of why. The way I look at the world – so differently than somebody else who would be more traditionally appropriate for this role – is exactly why I am here.

JJ Wilson: Son of Lululemon founder says father did ‘an amazing job integrating us into the business’
Subscriber content
May 13, 2019 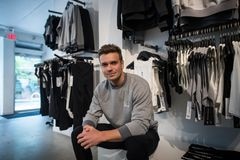 Lawyer Jasmine Daya: I watched law shows on television, could see myself in a courtroom
Subscriber content
April 29, 2019 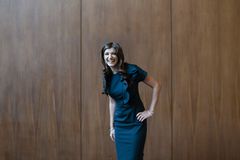 Gerri Sinclair of Kensington Capital: ‘When people tell me I can’t do something, I want to do it even more’
Subscriber content
April 15, 2019 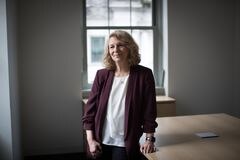