Shopify founder and CEO Tobi Lutke says working with an executive coach offers one of the highest returns on investment of anything you can do – a 10 to 100 times return on time spent. It’s vital because the learning curve of being a great executive is a lot less like learning the guitar and a lot more like learning skydiving. “It’s the kind of thing you should not do without an instructor,” he said in an interview with The Observer Effect.

But before you decide to work with an executive coach, leadership consultant Brenda Steinberg suggests you assess your readiness to ensure you can actually benefit. It starts with whether you have a tolerance for discomfort and an openness to experiment. “Successful coaching requires you to be pro-active in embracing new ways of perceiving and acting,” she writes in Harvard Business Review. It’s about experimenting with new approaches, and that will bring discomfort. She stresses that waiting for the perfect timing or perfect performance before trying different ideas will block progress.

It’s hard to change if you don’t believe you have the power to shape your future. So you need to take responsibility for your situation, the good and the bad, and your ability to change things. “Blaming the organization, the boss, too many responsibilities, and so on will block you from growth. Even if there is some truth in your reasoning, it’s impossible to move forward if you see yourself as a victim. You have to hold yourself accountable for making progress,” she says, and as well be willing to forgive those you blame.

You will need considerable self-discipline. The coach doesn’t do things for you. Instead, you must change behaviours and deal with the emotions that churn up within you and others. Your development will almost certainly require you to let go of ways of thinking and behaving that helped make you successful in the past. It may be hard for others to accept those changes in your personal or work relationships.

That’s why executive coaches often encourage involvement by colleagues, rather than working in stealth. “You will develop faster if you make yourself vulnerable to others (judiciously), including your boss, peers and even direct reports,” she says. “Share goals, ask for advice, listen with curiosity, and most critically, accept and act on the constructive feedback you receive.”

You also need to push past some prevalent myths about coaching, Bob Biglin, CEO of the Center for Advanced Emotional Intelligence, advises in Training magazine.

It’s often assumed, for example, that coaches should have similar backgrounds to their clients to offer the best advice. But coaching is not mentoring and so the coach doesn’t need relevant industry information. The coach needs enough relevant experience to understand the context in which you are operating.

People entering coaching might think their coach will tell them what to do. But he says that’s the opposite of coaching. The coach expects you to be smart and resourceful, given your success to date, and will help you to identify strategies that might allow you to close the gap between what you are capable of and how you now perform. “Coaches don’t fix people,” he adds. “Rather, they provide dedicated time and space for reflection, as well as the tools to enable their clients to find their own authentic path toward achieving their goals.”

Finally, another big myth to beware of: Being selected for coaching means you must be underperforming. He says coaching today is not about fixing “bad apples” but about pro-actively supporting and investing in promising leaders – which is why Tobi Lutke hired his own coach full time to work at Shopify, accelerating the progress of its talent.

How to make a gratitude journal work
Subscriber content
February 11, 2021 A formula for seeking the ‘impossible’
Subscriber content
February 4, 2021 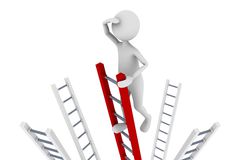 Why your efforts to manage your boss are failing
Subscriber content
January 28, 2021
Follow us on Twitter @globe_careers Opens in a new window
Report an error Editorial code of conduct
Due to technical reasons, we have temporarily removed commenting from our articles. We hope to have this fixed soon. Thank you for your patience. If you are looking to give feedback on our new site, please send it along to feedback@globeandmail.com. If you want to write a letter to the editor, please forward to letters@globeandmail.com.
Comments