If you’re an office worker, chances are that you’ve had to think about how you set yourself up to participate in the innumerable online meetings that now fill our days. It’s an interesting paradox. In “normal” times, you might never have invited colleagues into where you live, or even shown them the outside of your house. But now, you regularly interact with them by video from your kitchen or dining room table, living room, spare bedroom, or home office – maybe even a converted corner of your furnace or laundry room. We have no choice but to allow out public lives into our personal spaces.

Unfortunately, we’ve also seen some of the dark side of online behaviour. Online bullying has taken on a new meaning and found a new audience since we have been using video conferencing. It did not take long for videos to circulate and recirculate depicting people standing up from a video meeting in their underwear, or sporting their funkiest sweatpants matched with a dress shirt and tie. Even if no one was recording, it’s all too easy to be mortified by an unintentional naked stroll from the bathroom to the bedroom by a family member unaware that they were on video. How is that going to play out at the next company holiday party, when we finally get to hold one? The stories have been endless, as is the circulation of the videos themselves.

Now we have the spectacularly humiliating example that took place earlier this month with noted TV legal commentator Jeffrey Toobin. No need to go into detail about what happened, but it’s telling that those watching him at the time didn’t appear to take steps to tell him that his very private actions were being broadcast for all to see. Instead, the news about Toobin’s mistake very quickly made its way to online media outlets, including screen shots of the session (fortunately blurred). It was an unfortunate moment of lapsed judgment and clearly private behaviour becoming public behaviour that Mr. Toobin will have a hard time living down.

Is this what it has come to?

At an in-person meeting, we’re usually very clear about our public and private boundaries. That said, we’ve all probably had moments of “private” mistakes in a public setting: a trouser fly accidentally left undone, or a lost button on a blouse that leaves a bit too much visible. Typically, my experience is that we would attempt to save the person in question from embarrassment with a quiet word, knowing that they must come into work the next day. In my career, I have had many difficult conversations with co-workers, from pointing out body odor to prominent nose hair and various other personal grooming matters. The infraction or uncomfortable situation is noticed, privately addressed, and we move on. The matter is closed.

When someone mixes up the boundaries in an office setting, there are some clear consequences. Perhaps you happened to walk by someone’s office and find them doing something they should really not have been doing on company time, as Mr. Toobin was. Would you immediately go tell everyone what you just saw? Would you stay and watch? Maybe you’d even see it as an opportunity to extort money from the person, as I know happened in a case like this. Or would you discreetly knock on the door so they are aware they can be seen, and perhaps address the matter privately or with human resources? I would hope the latter.

Which is what all those watching Mr. Toobin should have done. Instead, the person hosting the Zoom meeting did not kick him out, and at least some chose to broadcast the incident, including their facial reactions as it was going on. They believed that further humiliating someone who is clearly already humiliated was the way to go. It’s cruel, and if Mr. Toobin’s career is in now in ruins, they helped him get there.

With our new work reality comes a new obligation for civility and professional conduct – from everyone. Although not excusing Mr. Toobin for doing what he did, if something potentially embarrassing is happening while a colleague is on camera, do the right thing - which doesn’t include rebroadcasting it to the world. Turn away and tell your co-worker what’s happening or take appropriate action such as informing human resources or the legal department. Don’t simply continue watching in the spirt of entertainment and shock. You know it is wrong to play voyeur whether the person is aware the camera is on or not.

And, for the rest of us, be careful how you are managing your professional persona when you are working from home, potentially in your shorts.

Eileen Dooley is a principal and executive coach in the leadership practice of Odgers Berndtson, global executive search and leadership advisory firm.

Opinion
One simple device could save the world from future Jeffrey Toobins
Subscriber content
October 23, 2020 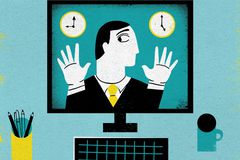