With federal legislation intended to legalize cannabis sale and use expected to be finalized by this summer, some proactive employers are trying to get ahead of the game by considering workplace policies.

For many, the timing also presents a good opportunity to assess other workplace policies, such as those dealing with harassment, given the seemingly endless news cycle surrounding those abusing positions of authority.

With 12.3 per cent of Canadians 15 and older admitting to marijuana use, according to a Statistics Canada report released last month, the time to establish what will be tolerated in the workplace is here. The topic was discussed by a panel of experts at the Employee Recommended Workplace Awards in Toronto last week.

Does your employer really care? Six ways they can walk the walk

Christopher Burkett, a partner at the law firm Baker McKenzie in Toronto, says employers have every right to operate their workplace in a way that ensures that staff members are fit to work. Much like an employer wouldn’t tolerate an employee coming back from lunch slurring their speech after a couple of glasses of wine, for example, the same applies to cannabis use.

“In the same way that you can direct that person and take action in that situation, you now need a policy that aligns your alcohol with your drug policy and your marijuana policy,” he says.

Communication is key, he adds, in implementing any policy. In certain states south of the border where legalization has been in place for some time, Mr. Burkett says that training and awareness programs have helped improve how workplaces deal with marijuana use.

“You don’t want to be operating heavy machinery next to someone who smoked up,” he says. “So they make it about responsibility for each other, and I think you can’t communicate enough about what your expectations are.”

However, much of the difficulty with implementing marijuana policies stems from its use for medicinal purposes.

Daniel Lublin, a partner at Whitten and Lublin Employment Lawyers in Toronto, says that while it is possible to approach the subject of medical marijuana in a similar fashion to alcohol and alcoholism, key distinctions must be made.

When it comes to an employer asking questions about an employee’s use of cannabis, there are certain limitations due to privacy.

Jacqueline Luksha, a lawyer at the Toronto office of Hicks Morley Hamilton Stewart Storie LLP, says that there are certain questions that absolutely can and should be asked. These might include whether it is necessary for the employee to use marijuana on the premises, is it necessary for it to be used during work hours, and is it necessary to use the kind of marijuana containing the psycho-active ingredient, THC.

“You’re going to meet a fair bit of resistance because that’s kind of getting into a person’s private medical decisions,” she says. “But I think you can ask those questions and I think employers should be asking those questions.”

Before asking these questions, there is an onus on the employer to educate itself about marijuana. As Ms. Luksha explains, understanding the nature of the substance being used and its impact on the human body, one’s attention span and an ability to perform certain jobs is critical.

When it comes to harassment in the workplace, Ms. Luksha says she has a simple barometer for what is and isn’t acceptable to do or say.

“I like to say if you can tell your kindergartner not to do it on the playground, you shouldn’t do it at work,” she says.

But from Hollywood producer Harvey Weinstein on down, those in positions of authority have done little to heed that kind of advice.

Mr. Burkett of Baker McKenzie says that people in authority need to understand that what may appear consensual with a co-worker in the moment may be affected by a power imbalance, especially as time passes.

“In order to protect yourself you need to put in place a policy that says people in positions of authority need to report if they’re going to be entering into a relationship with a subordinate or someone else in the workplace,” he says.

That way if an allegation comes to light six months later, it can be framed in the appropriate context.

Mr. Lublin says that with all the negative publicity around harassment in the workplace, employers now often terminate first and ask questions later. He adds that some employers would rather accept the possible legal ramifications of wrongful termination than surround themselves with the negative publicity that may come with not distancing themselves from someone who may be a sexual predator in the workplace.

However, Ms. Luksha says the best way to combat that is to be proactive. In the current climate, she says, whether it’s rumours or an anonymous complaint, an employer should be running an investigation into it.

“That’s key,” she says. “Addressing it is really the biggest thing.”

However, an employer has to be able to run its workplace as it sees fit, and Ms. Luksha says her firm often gets complaints of harassment that simply turn out to be an employee being told not to do something or that they are not doing their job well enough.

“You can as a manager manage your workplace,” she says. “You can performance-manage people, you can discipline people, you can assign them to different work projects, you can do all those things, and that’s not going to be harassment.”

Equal pay, and five other ways employers can show they care
October 23, 2018 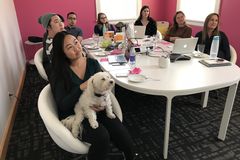